All of the descriptions and statements made by George Washington and other personalities in this article are as they appear in the original journals and writings from which they are taken, including the grammar and punctuation used at the time. Just as George Washington was entering his sixteenth year an arrangement was made whereby he and his friend and companion, George William Fairfax, accompanied beyond the Blue Ridge Mountains a party of surveyors which Lord Fairfax was sending out to prepare his lands for tenantry. So far as avail- able records disclose Washington received no compensation for his services on this journey, if indeed he was expected to per- form any. Indications are that it was somewhat of a lark for him, arranged doubtless by his gracious and wise friend, Lord Fairfax. More than any other person, except his mother and his half- brothers, Lawrence and Augustine, Lord Fairfax influenced and determined the early career of George Washington. Before 1748 they had met at Belvoir, and Fairfax had become in- terested in Washington's efforts to learn surveying, in his friends, especially young George William Fairfax, and in their sports and athletic achievements. Here young Washington doubtless learned from Fairfax himself of the history and conventions of the Old World and received first impressions of the comparatively greater opportunities of the New World. In any event, Fairfax's concern for his young protege was such that he did not hesitate to advise his mother regarding his schooling and other matters pertaining to his welfare. Through their common interest in the Northern Neck, Washington as a surveyor and Fairfax as owner, the friendship thus formed ripened into an arrangement beneficial and agree- able to both. As finally determined, these lands included all the territory between the Rappahannock and the Potomac rivers, aggregating more than five million acres. In 1649 Charles II had granted this vast estate to Lord Culpeper and others as a refuge for Cavaliers, but Culpeper's son, the gover- nor of Virginia, later acquired all the ungranted claims thereto, his father's by inheritance and the others by purchase. His agents managed his estate so badly, however, that repeated efforts were made to dispossess him in the public interest. Consequently when Fairfax inherited his Virginia lands, they were under a ban capable of varied uses in the hands of avaricious lawyers and designing politicians. 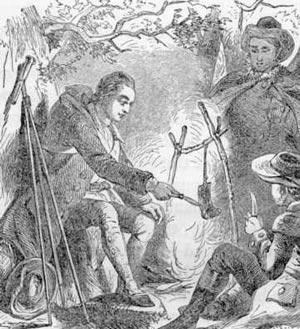 Washington cooks meat by holding it over the fire on forked sticks.

Complicating this situation Germans and Scotch-Irish were then pushing into that part of the Northern Neck west of the Blue Ridge Mountains. Ignoring the Fairfax claims, some came as squatters, while others purchased lands from rival claimants, notably Yost Hite. Accordingly Fairfax petitioned the King to determine his rights in the matter, and in 1735 he came to Virginia to give his interests there personal attention. He remained two years. In this time he was able to make a satisfactory arrangement with the Virginia Assembly, which mitigated somewhat the objections to his feudal holdings and brought them into greater favor with the English Privy Council. As a result, but not until 1745, the King confirmed the validity of the Fairfax title to the whole of the Northern Neck but on condition that all legal grants made to others therein prior to that date be respected and confirmed. To determine the legality of a grant to Yost Hite, in 1736 Fairfax instituted a suit which was not finally adjudicated until several years after his death. The legality of his holdings having been confirmed, Lord Fairfax lost no time in taking possession of them. To this end, in 1746, a company of surveyors ran the famous "Fairfax Boundary Line" which connected the head springs of the Rap- pahannock and the North Branch of the Potomac rivers. In the same year they planted at the latter "Fairfax Stone." The following year Lord Fairfax emigrated to America and after a sojourn at Belvoir during which he was in touch with his western interests, he moved permanently to "Greenway Court," a hunting lodge previously built for him but under his direction, on a site about eleven miles from the present city of Winchester, Virginia. To this day the approach of this lodge is indicated by a white post planted on the public highway at a place known as "White Post." In this retreat this strange man, a tart old bachelor, lived a life that savored somewhat of the American frontiersman of his day. He became a justice of the peace with authority in each county of his proprietary domain, and in 1754, under a commission from Governor Dinwiddie, acted as county lieu- tenant of militia. As Greenway Court was quite adequate to his needs, his proposed feudal mansion remained only a dream, its would-be lord living instead in the utmost simplicity. Each year he imported new clothes of the latest model but, unlike his protege, George Washington, Fairfax did not wear them. A titular aristocrat, being the only resident English peer in Amer- ica, he lived the life of a democrat; an alleged Tory, there is no record of his having raised his voice in defense of English royalty. Consequently till his death, December 9, 1781, Fairfax was accorded all the privileges of a patriot Virginian, honored and respected even in the bitterest days of the Revolution. Upon being informed of the surrender of Lord Cornwallis at York- town, he is reported to have said: "Take me to bed, Joe. It is time for me to die," a statement capable of more than one interpretation. Apropos of this, let it be remembered that Lord Fairfax, the Virginian, was a direct descendant of Lord Fairfax, the Parliamentary leader who, in 1646, vainly commanded Colonel Henry Washington to surrender into his hands Worcester, a Royalist stronghold. The dust of the sixth Lord Fair- fax reposes in a crypt beneath Christ Church, Winchester, Virginia. Even before the ownership of the unappropriated lands in the Northern Neck had been definitely determined, Lord Fair- fax had made known his desire to open, to settle, and to develop them. As the first surveying party sent out for these purposes had experienced no mishaps or unusual adventures, young Washington was allowed to accompany the party going beyond the mountains in the spring of 1748. This party was in charge of James Genn, the county surveyor of Prince William County and a man of many adventures in the wilderness. Accompanied by young Washington, rodmen, chainmen, and other attendants, Genn set out March 11. Going by way of Ashby's Gap and Greenway Court he made his first important stop on the South Branch of the Potomac where that stream intersected the "Fairfax Boundary" which had been determined two years pre- viously. Washington kept a diary of his experiences and adventures. 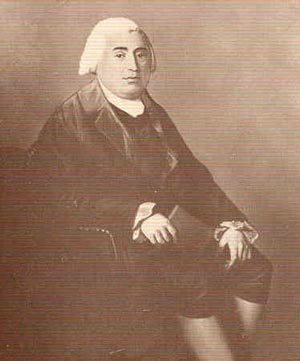