The Adventures of Col. Daniel Boone

Formerly A Hunter; Containing a Narrative of the Wars of Kentucky

The Adventures of Col. Daniel Boone was subsequently published in The American Magazine in 1787 and again in a book by George Imlay in 1793. The latter publication is the source wherein we present the complete text.The publication of Daniel Boone's "Adventures" in 1784 served to immortalize Boone the frontiersman as an American legend and a true folk hero. Published by John Filson on Boone's 50th birthday, the narrative describes in Boone's own words his exploits in the Kentucky wilderness from May, 1769 to October of 1782.

Boone's First-Person Narrative As He Wrote It

Daniel Boone's Adventures is presented here for the first time on the Internet. His first-person narrative appears as he actually wrote it, using the grammar and syntax current in America in the 1700s. The only concession made — and that only for the purpose of making Boone's personal account easier to read — is the substitution of "s" in place of what appears as an "f" in the original text. 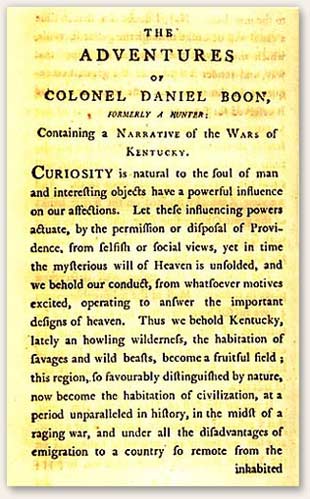 In his autobiographical narrative Boone tells of his passage through the Cumberland Gap, leading a party of settlers that cut the Wilderness Road in 1775. Boone's trailblazing efforts opened a door beyond the Alleghany Mountains, establishing a route used by thousands in the first westward migration.