Benjamin Franklin was not only one of the Founding Fathers of the United States.

He was a leading writer, publisher, inventor, diplomat, scientist, and philosopher. He is well-known for his experiments with electricity and lightning, and for publishing "Poor Richard's Almanac" and the Pennsylvania Gazette. He served as Postmaster General under the Continental Congress, and later became a prominent abolitionist. He is credited with inventing the lightning rod, the Franklin Stove, and bifocals. 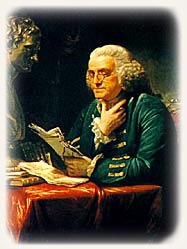 
Known today as "The Autobiography of Benjamin Franklin," this classic piece of Americana was originally written for Franklin's son William, then the Governor of New Jersey.

His work-- in effect the life of Benjamin Franklin-- portrays a fascinating picture of life in Philadelphia, as well as Franklin's shrewd observations on the literature, philosophy and religion of America's Colonial and Revolutionary periods.

Franklin wrote the first five chapters of his autobiography in England in 1771, resumed again thirteen years later (1784-85) in Paris and later in 1788 when he returned to the United States. Franklin ends the account of his life in 1757 when he was 51 years old.