Great Britain's former thirteen colonies were officially recognized in the Paris Peace Treaty of 1783 as free and independent states, officially establishing their new status as a sovereign United States of America.

Also: boundaries of the United States were defined, fishing rights on the banks of Newfoundland were resolved, navigation on the Mississippi River was opened up to citizens of both nations, and evacuation of British forces from all thirteen states was provided for. 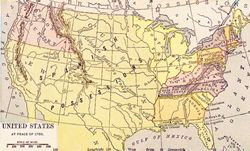