Her father, the Rev. William Smith, was for more than forty years minister of the Congregational Church in Weymouth, Massachusetts. Her mother, Elizabeth Quincy, was the great-great-granddaughter of the eminent Puritan divine, Thomas Shepard of Cambridge.Wife of John Adams, second president of the United States, Abigail Adams was among the most remarkable women of the Revolutionary period.

Abigail was alone at home for ten years while Mr. Adams was away as a delegate to the Continental Congress and later on diplomatic business in Europe. Over time Abigail Adams became extensively acquainted with the best English literature, and wrote in a terse, vigorous and often elegant style.

Two volumes of her letters were published by her grandson under the titles "Letters of Mrs. Adams, the Wife of John Adams" and "Familiar Letters of John Adams and His Wife Abigail Adams During the Revolution." Her letters provide valuable background material on the life of the times, especially of the era during wartime.

She shared the intense interest of her husband in the political disputes that were to culminate in war. Later, when Mr. Adams became President, opposing political contemporaries argued that she exerted undue political influence over her husband. 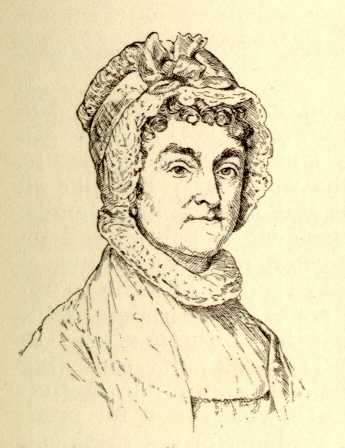