Appearing in the Columbian Centinel June 2, 1792

On Page 1: An Act To Provide for the National Defense by Establishing an Uniform Militia throughout the United States.

This act provides that "...every able-bodied white male citizen...of the age of 18 years and under the age of 45...be enrolled in the militia...Every citizen so enrolled...shall within six months thereafter, provide himself with a good musket or forelock, a sufficient bayonet and belt and...not less than twenty-four cartridges..." 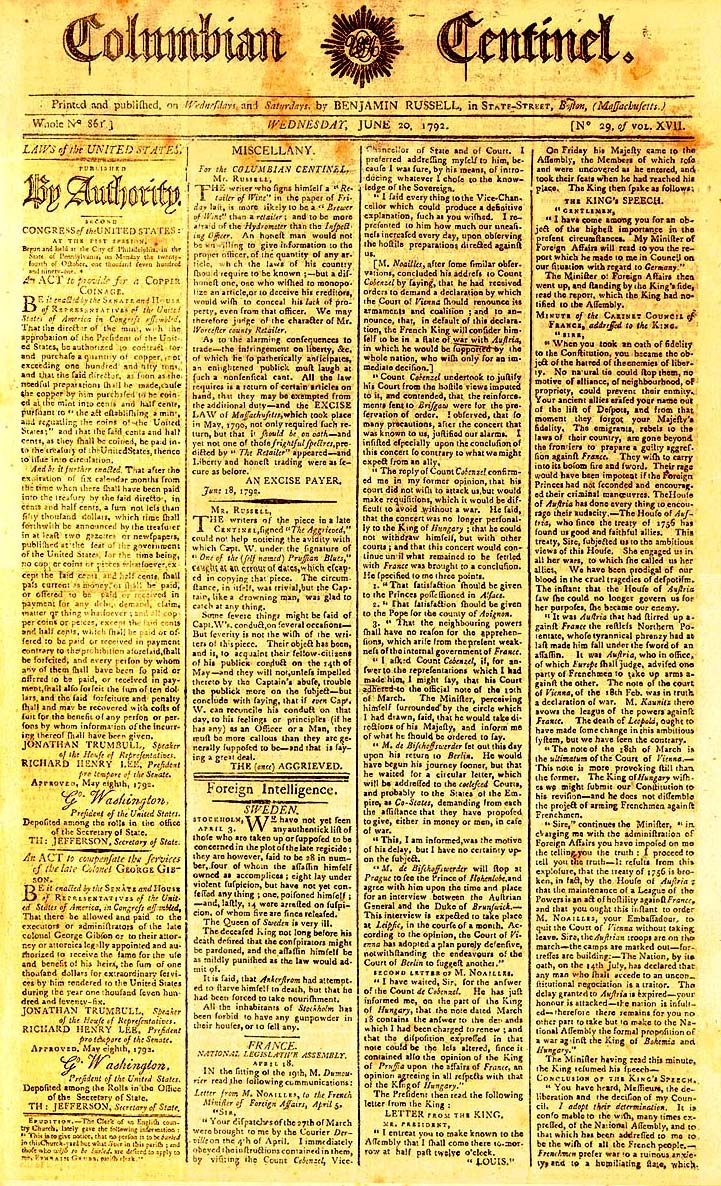 The act also provided "that if any person, officer or soldier...called out into the service of the United States, be wounded or disabled while in actual service, he shall be taken care of and provided for at the public expense."

This legislation creating the young nation's first National Conscription Act was passed by the Second Congress, and signed in script type by President George Washington on May 8, 1792.

The Act calls for the creation of brigadiers, divisions, regiments and battalions of companies within each state. It also calls for a specific number of officers and troops for each military unit.

Certain persons are exempt from military duty including the Vice-President of the United States, the members of both Houses of Congress and Custom House officials, among others. (Curators Note: it seems executive privilege hasn't changed much over the years!).

Page 1 of this newspaper also contains another Act "relative to the Compensation to certain officers employed in the Collection of the Duties of Impost and Tonnage."

Also in this issue...on page 3: A report from the Massachusetts legislature that John Hancock and Samuel Adams are sworn in as Governor and Lt.-Governor, respectively of the state of Massachusetts after the recent election.

"Mail stages which run between Boston and Providence, every day except Sunday .... Every morning at five o'clock, a stage will set off from Mrs. Grays, in State Street, Boston; and from Dagget's Tavern, in Providence; and arrive at the same place, each day at four o'clock in the afternoon."