For layperson and academic alike the study of early American history can be a challenging-- if not exhilarating-- adventure.

For Americans--- the pursuit of their early American roots has a very special, personal meaning. Folks who live in other countries around the world, looking for a rosetta stone to unlock the secrets of a unique democratic institution, search early America with equal intensity and fervor.

In every case....reading stories from America's salad years is akin to embarking on a safari, hunting for political truths that roamed the landscape of those early years. Of course, the object of the search is to capture the wisdom of our pioneer leaders, all the while tracking their movements through perilous terrain. Lest we forget, observing their formidable opponents along the way is also a requisite to joining the hunt.

This Fall Edition offers our readers a number of interesting adventures.

Todd Kreamer's "Sons of Liberty-- Patriots or Terrorists?" provides parallels that match today's headlines. His timely essay proves once again that what goes around, comes around.

Todd Kreamer served as adjunct professor of history at New River Community in Dublin, Virginia, teaching a survey course in American history. Mr. Kreamer formerly was executive director of the Brookside-Saratoga County Historical Society at Ballston Spa, New York. Currently, he is completing a work entitled "Enemies on Our Frontiers," detailing frontier Virginia in the French and Indian War.

An adventure of a different sort, the kind that challenges the "separate spheres" of men and women, is spoken to in an analytic profile of Jemima Wilkinson and Deborah Sampson Gannett.

Written by James A. Henretta, Priscilla Alden Burke Professor of American History at the University of Maryland, College Park, "Unruly Women" paints a vivid and telling portrait of two women in 18th century America whose lives are both revolutionary and controversial even today.

His profile on "Unruly Women" is from "America's History," Third Edition, 1997. If you wish to offer Prof. Henretta your comments on his story, or any other matter of historical relevance, his email is: jh53@umail.umd.edu. 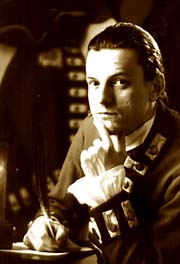 Adding to our foray into the jungle of enlightenment is "James Chalmers and Plain Truth-- A Loyalist's Answer to Common Sense." Written by Christopher New, this original research uncovers an important political pamphlet that has been buried in the shadows of Americana for the past 220 years. To those who are seekers of historical verities, Mr. New's "discovery" of an important document long-hidden from view helps us understand 'the other side' in the debate over independence.

After the publication of Tom Paine's 'Common Sense,' James Chalmers, a prominent Maryland Loyalist, put pen to hand in an attempt to rebut Paine's arguments for independence, thereby offering colonists a contrary view. 'Plain Truth' bears the pseudonym of Candidus, which Mr. New claims-- and offers evidence to support-- is Chalmers' authorship.

Mr. New's article in this issue of The Review is an excerpt from his newly-released book, "Maryland Loyalists in the American Revolution," appearing in bookstores this fall. A freelance writer and independent filmmaker from the Baltimore area, Mr. New has won top screenwriting awards at the Charleston and Houston International Film Festivals for his historical screenplay on Francis Scott Key and the National Anthem. He also was voted a 1995 TELLY award for writing and directing "Tories and Rebels," an historical film about the American Revolution.

The adventure into our past continues with Richard Battin's colorful account of General "Mad Anthony" Wayne's stunning victory over the Indians at Fallen Timbers in 1794 in northwestern Ohio. Gen. Wayne's military successes at Fallen Timbers and throughout the Northwest Territory forever put an end to any ambitions entertained by Britain, France and Spain of hegemony over America's western lands.

A previous contributor to The Early America Review, Mr. Battin has written other pieces on the history of the Indiana-Ohio area. His first play, a comedy in two acts, was produced outside Chicago late last year. He currently serves as managing editor of the News-Sentinel, a Knight-Ridder newspaper in Fort Wayne, Indiana.

Early America has given us many success stories, not the least of which is the one profiled by Paul Redmond Drew in his paper on Sir William Johnson.

Relatively unknown to most Americans, Johnson enjoyed a "success story" on two levels. On the personal side, we learn of his

leaving Ireland for America at the age of 23, rising in time to became an extraordinarily successful entrepreneur with a multitude of business interests. On the political side, Johnson played a key and vital role as Superintendent of Indian Affairs from 1755 to 1774 in the colonial development of America, particularly in the expansionist policies of the British imperial government.

Paul Redmond Drew, author of this essay, is Collections Librarian for the Institute of Grassland and Environmental Research in Aberystwyth, Wales. IGER is Britain's premier research institute concerned with the management, utilization and environmental impact of grasslands. While at the University of Wales, Mr. Drew had access to the university's set of papers on Sir Johnson, and wrote his essay at that time.

As an aside, Mr. Drew notes that Aberystwyth on the west coast of Britain in Wales is home not only to the University of Wales (second largest after the University of London) but also the National Library of Wales, thus claiming the distinction of "having more librarians per square mile than anywhere else in the U.K."

The adage, "future events cast their shadows before," might easily be the subtitle of Bruce Kauffmann's personal commentary on the Whiskey Rebellion. One of the points he makes is that 'sin taxes' are too convenient for most politicians to ignore-- even early America's best and brightest. I believe you'll enjoy Mr. Kauffmann's point-of-view, whether or not you agree with it.

Bruce Kauffmann is a professional writer-historian who writes "Bruce's History Lessons," an e-mail column on historic subjects subscribed to by several private companies and associations. Mr. Kauffmann resides in Alexandria, Virginia, and has worked as a journalist and speechwriter. He was head writer for the "Dan Rather Reporting News, Analysis and Commentary" on CBS News Radio. He won the Writer's Guild of America Award for best spot radio news broadcast, as well as the 1991 Hal Terkel Memorial News Writing Award for general excellence.