The School for Patriot Gentlemen:

By Dr. Joseph Heim Looking back upon his life's work in his draft 1821 autobiography, Thomas Jefferson noted that among his early achievements was the reform of the College of William and Mary. His efforts were such that "I effectedÖa change in the organization of the institution."1 The Williamsburg college always had a call upon Jefferson's affections ñ even as an elderly man, he could fondly recall the spring day in 1762 when the chiefs of the Cherokee visited the college. As a young scholar of promise, Jefferson was encouraged to enroll at William and Mary, where it was hoped his talent and dedication would find ample fulfillment. He did not disappoint such expectation. John Page, his contemporary and later Governor of Virginia, remembered that Jefferson "could tear himself away from his dearest friends, to fly to his studies." Family lore, no doubt with some exaggeration, tells of the future author of the Declaration of Independence studying at his desk from twelve to fifteen hours per day. Nonetheless, Jefferson's academic accomplishment was real and exceptional. No other undergraduate was regularly invited to the nearby Governor's mansion for dinner and intellectual conversation with such leading luminaries as Lt. Governor Francis Fauquier, William Small, the professor of natural philosophy at William and Mary, and George Wythe, perhaps the leading lawyer of Colonial Virginia.2 The College of William and Mary served not merely as a cherished memory for Jefferson; it also figured large in his hopes. The American Revolution opened new vistas into the future, bringing in its wake not only the overthrow of aristocratic pretension, but also its replacement by a commonwealth of political equality.3 But how was the resulting new republic to be maintained? It was this question that preoccupied the revolutionaries of Jefferson's generation. Jefferson, too, concerned himself with plans for establishing government upon a new foundation, but while he shared many of those ideas of limited government and popular sovereignty, he harbored the suspicion that institutions alone were an insufficient guarantee of liberty. The enlightened citizen, defensive of his rights against tyrannical encroachment, was the bulwark of freedom. Importantly, Jefferson never believed civic virtue was innate or characteristic of the general populace. In his famous letter to John Adams on the idea of a natural aristocracy, he emphasized that while talent and ability were randomly distributed throughout society without regard to wealth or birth, potential would only emerge with careful schooling.4 Or, as Jefferson's Notes on the State of Virginia (1781) put the matter more forcefully, government leaders could design a system whereby "genuisses will be raked from the rubbish."5 This need for educated citizens, the continuation of the revolutionary generation of patriot gentlemen, clearly required government to be concerned with education. In Virginia, this meant the College of William and Mary, the only existing institution of higher learning in the Old Dominion, was the logical choice for Jefferson's attention. Unfortunately, choice and possibility were quite different matters. Even before the disruption of the Revolution, William and Mary was wracked by dissension concerning its mission. At the same time, discord prevailed over the governance of the college. Since its founding in the 1690's, two bodies ñ the President and the Fellows (the permanent faculty, of whom the overwhelming majority were Anglican clergymen) and the outside Board of Visitors ñ continually jousted for control. In 1763, a spiteful Board of Visitors, resentful of faculty support for an American bishop that would have reduced lay influence in Virginia's established church, passed a statute requiring the submission of the faculty, only to have it reversed by the faculty's resort to a royal veto.6 There were other conflicts, not so dramatic, but no less real. In 1772, Robert Carter Nicholas and a number of conservative Visitors unsuccessfully attempted to muzzle Reverend Samuel Henley, a faculty member whose preaching and liberal theology had provoked some of Virginia's young men (including Jefferson) to re-examine the relations between church and state in this Anglican colony.7 In a sense, the Revolution only worsened a situation that was already marked by disarray. The college faculty, resolute Tories as the King and his officers had been their shield against the zeal of the gentry exercised through the Board of Visitors, abandoned the college in 1776. Left in place was one faculty member, Reverend James Madison (cousin of the future president who possessed his name, and later the first Episcopal bishop of Virginia), who was willing to work with any Patriot leader that might wish to preserve the college. 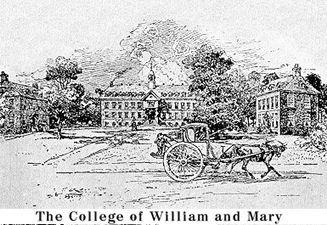