The Dark Eagle comes to claim the wilderness. The wilderness will yield to the Dark Eagle, but the Rock will defy him. The Dark Eagle will soar aloft to the sun. Nations will behold him and sound his praises. Yet when he soars highest his fall is most certain. When his wings brush the sky then the arrow will pierce his heart.1One of the most popular legends regarding Benedict Arnold involves his expedition to Canada in 1775 and Natanis, an Abenaki Indian from Northern Maine. The legend goes that Natanis met Arnold on his way to attack Quebec and not only gave him the nick name of "Dark Eagle", but also made an eerily true prediction about Arnold's future life. His prediction is now an oft-used quote as follows:

Having read all of the published biographies and most of the fiction regarding Arnold, because of its extensive appearance in these books, I had come to believe that the Natanis quote was true and was based on some credible original source. However, what I discovered upon further investigation is that no one was able to cite a credible source and the quote just seemed to show up, particularly in the twentieth century biographies. By a stroke of luck, I happened on a old book about the Revolutionary War that had Arnold as one its main characters and found the answer to the question of where the quote originated.

The original source of this quote is an 1876 book written by George Lippard entitled The Legends of the American Revolution 1776.2 It turns out that George Lippard, although completely unknown today, was the premier American fiction writer of the middle part of the nineteenth century. "His books were best sellers, and during the decade between 1844 and 1854 Lippard was the most widely-read author in the United States. He not only wrote books which far outsold those of any other author of fiction then writing in America...but also received the highest rates then paid by American weeklies to any of their writers-Longfellow and Cooper excepted."3 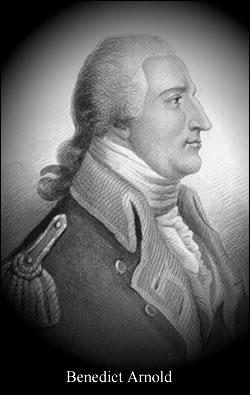 Lippard's style has been described as "tangled heaps of seductions and catastrophes, plots, murders, rescues and revenge". That writer goes on to argue that Lippard overloaded his stories with villains and "menaced maidens" to a point that his "plots often become unintelligible".4Apparently, Lippard's "style was heavily criticized even in his own day". Lippard died in 1854 at the age of thirty-two.

Various writers since Lippard have used the Natanis story, focusing on the language of the quote, substantially as it appears in Lippard's book. However, a more comprehensive reading of Lippard's Arnold story by today's standards offers the reader too much rhetoric with its overblown prose and its flowery descriptions. In terms of understanding Lippard and his style, it is helpful to look at the prose and style of "BOOK THIRD" of Legends, which contains his Benedict Arnold story.

The first chapter on Arnold starts out as follows: "The angels of God look down from the sky to witness the deep tenderness of a mother's love. The angels of God look down to witness that sight which angels love to see -- a mother watching over her sleeping babe." The mother, of course, is Hannah Waterman Arnold, the mother of Benedict Arnold. Lippard uses the same flowery language to end up after a page and a half having the mother say, "...take, O take this child while he is yet innocent! Let him not live to be a man --a demon in human shape-- a curse to his race! "5 It is safe to say that nothing like this line was ever uttered by Arnold's mother.

Later in the story, Lippard introduces Natanis, who is in a trance looking at the graves of his people. Who should be in boats coming up the river during Natanis's trance, but Benedict Arnold and his army on their expedition to take Quebec. Lippard describes the scene prior to the now famous Natanis statement as "Look! He rises in the canoe-he stands erect- he flings the cloak from his form-he lifts the rough fur cap from his brow. Do you mark each outline of that warrior form?.. He stands there, erect in the canoe, with outspread arms, as though he would say- Wilderness I claim ye as my own! Rocks ye cannot daunt me;...Look! As he stands there, erect in the canoe, the Indian Natanis, beholds him, springs into the river and soon stands by his side. 'The Dark Eagle comes to claim the wilderness', he speaks in the wild Indian tongue, which Arnold knows so well."6Then Natanis goes on to say the rest of the now immortal words about the "dark eagle".

Since he was writing fiction, Lippard does not have any citations as to sources for any of his quotations or the elements of his story. That is because there is no original or prior source for much of the book, and certainly for the Natanis story. He also does not have any bibliography listed in his book. It is clear that he alone is the source of the Natanis words, which he was using to embellish his story. Being a fiction writer, he would probably be very amused to find serious historians now using his words as though the incident really happened.

It is interesting to note that none of the 19th century biographers of Benedict Arnold, including Jared Sparks, George Canning Hill and Isaac Arnold,7 mentions the now familiar Natanis quote about Arnold. The Natanis quote is also not mentioned in any of the eighteenth or nineteenth century Revolutionary War histories. No one in the nineteenth century picked up on Lippard's Natanis story because no one considered him a serious source.

It is also worth pointing out that none of the journals of the participants, and there were many, in the expedition to Quebec, including Arnold's own journal, mention Natanis in the context of speaking about Arnold or referring to the quote.8 Only one journal has more than a passing reference to Natanis, which among other things reports that Natanis fought with Arnold's army after they reached Quebec.9 There is not even a hint of the Natanis story in the Arnold expedition journals

The first book about Arnold, after Lippard, that includes the dark eagle quote does not occur until the twentieth century. The book is a fictional autobiographical novel called My Story: Being the Memoirs of Benedict Arnold, which the author, F.J. Stimson published in 1917,10 Stimson's book, which is written as a memoir by Arnold, contains no notes and no bibliography and is not considered as a serious study of Arnold. Stimson's book should be a very questionable source for any information about Arnold. However, despite the nature of his book, Stimson seems to have set the train in motion and many others who came after him followed Stimson's use of the Natanis quote. Even the somewhat recent Arnold biography by Willard Sterne Randall uses the quote, but cites Isaac Arnold's biography as his source.11 However, as stated above, there is no mention of the Natanis quote in Arnold.

It is clear that subsequent writers have picked up the words from the two fictional authors, Lippard and Stimson, and are repeating them as though they are documented in some way. The real problem here is that Lippard was clearly known as a fiction writer and anyone reading his prose should have questioned his credibility as a historical source. However, by 1917, Lippard had disappeared from view and his reputation as a fiction writer forgotten. In addition, since Stimson does not reveal his source for the Natanis quote, the real source got lost and subsequent writers just assumed it was true because it sounded so good. It is hard to see how Stimson had any credibility as a source in his "Arnold memoirs".

One reason that the story has been picked up by so many others is because, in addition to the fact that the description is appropriate, the quote itself has great sound bites. Benedict Arnold could be described as "dark", both in physical appearance and, in many people's minds, his personality. He also has "eagle" like qualities, particularly in his military career. It is not too much of a stretch to see Benedict Arnold as an eagle. Therefore, the "dark eagle" description seems like a perfect way to refer to him. The rest of the quote certainly makes the notion of Arnold's predisposition to treason ring true.

There is nothing wrong with fiction creating a phrase or a description that seems to embody a person or an incident in history, as with the phrase "Dark Eagle". The problem occurs when the fictional phrase is presented as a documented historical fact. The dark eagle story is a prime example of how fiction morphs into fact over time when the right sound bite is used. That the Natanis quote has caught on with both authors and readers is evidenced by the number of books written about Arnold since Stimson, both novels and serious biographies, which have used the title of "Dark Eagle".12

The expedition to Quebec that was led by Colonel Arnold in the fall of 1775 is an inspiring tale of vanquishing the wilderness and of leadership in a time of severe hardship and crisis. The heroic nature of the Quebec expedition made Arnold's reputation at the time because it was the subject of a number of newspaper articles. It is doubtful that any other American general could have accomplished that trip with the minimum of loss of men and could have inspired the participants like Arnold was able to do. The fact that the Natanis story was a part of this fabled expedition makes it even more compelling to those who are critical of Arnold's career as a way to offset his accomplishments in that effort.

Based on its original source, the Natanis quote and story is only fiction and should be dropped from any serious discussion of Arnold's life and career. The quote is now almost always used as a way to validate a conclusion about Arnold's character and his predisposition to engage in treason. Rather than look at what really happened, it is easier to enshroud a controversial figure like Arnold in a dark eagle quote that seems to capture his villainous tendencies. This does a disservice to both Arnold and the truth. The fact is that Arnold's real story is actually more fascinating and his contributions much more significant than the typical fictionalized biographies tell.

10. F.J. Stimson, My Story: Being the Memoirs of Benedict Arnold: Late Major General in the Continental Army and Brigadier General in that of His Britannic Majesty (New York: Charles Scribner's Sons) 1917.