A Behind-the-Scenes Look At Paul Revere's Most Famous Engraving

When Paul Revere first began selling his color prints of "The Bloody Massacre perpetrated in King Street" in Boston, he was doing what any like-minded patriot with his talents in 1770 would have done. Only, Paul Revere did it faster and more expeditiously than anyone else, including two other artist-engravers who also issued prints of the Massacre that year.

Twenty-one days before — on the night of March 5, 1770 — five men had been shot to death in Boston town by British soldiers. Precipitating the event known as the Boston Massacre was a mob of men and boys taunting a sentry standing guard at the city's customs house. When other British soldiers came to the sentry's support, a free-for-all ensued and shots were fired into the crowd.

Four died on the spot and a fifth died after four days. Six others were wounded.

The presence of British troops in Boston had long been a sore point among Boston's radical politicians. Paul Revere wasted no time in capitalizing on the Massacre to highlight British tyranny and stir up anti-British sentiment among his fellow colonists. As you will see, Revere's historic engraving is long on political propaganda and short on accuracy or aesthetics. 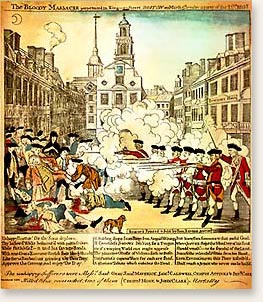 Notice how the British Grenadiers are shown standing in a straight line shooting their rifles in a regular volley, whereas when the disturbance actually erupted both sides were belligerent and riotous.

Notice also that Revere's engraving shows a blue sky. Only a wisp of a moon suggests that the riot occurred after nine o'clock on a cold winter night.

Notice too the absence of snow and ice on the street, while Crispus Attucks — a black man lying on the ground closest to the British soldiers — is shown to be white. As an aside, it should be noted that as a result of his death in the Boston Massacre, Crispus Attucks would emerge as the most famous of all the black men to fight in the cause of the Revolution, and become its first martyr.

Documentation has come to light over the years revealing details on the other Boston Massacre paintings. Revere copied engraver Henry Pelham's drawings of the Massacre, produced his own engraving, and three weeks after the occurrence was advertising his prints for sale in Boston's newspapers. By the time Pelham's prints hit the street, Revere's print had flooded the market. A third engraving was executed by Jonathan Mulliken, who also issued prints depicting the event. Except for a number of minor differences, all three prints appear alike.

In his rush to produce his engraving Revere employed the talents of Christian Remick to colorize the print. Remick's choice of colors is simple yet effective. Notice the use of red for the British uniforms and the blood. The other colors — blue, green, brown and black — all contribute to make this print what is arguably the most famous in America.

Few historians would deny that the Boston Massacre proved to be a milestone in America's road to independence. By popularizing the tragic event, Paul Revere's print became "the first powerful influence in forming an outspoken anti-British public opinion," one which the revolutionary leaders had almost lost hope of achieving.