Prior to their submission of the draft to Congress, Jefferson and his colleagues made a total of forty-seven alterations to the text. Adams and Franklin, along with Jefferson himself, each made changes in the document while neither Roger Sherman nor Robert Livingston made any. The five-man Committee then submitted the draft to Congress on June 28. 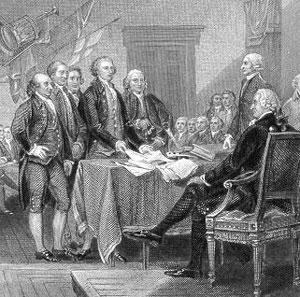 While Jefferson fared well at the hands of his fellow committeemen, in that the changes in his draft were minor, Congress was another matter. Jefferson felt at the time that his handiwork was subjected to what he called the 'depredations' of Congress.

Over several days of debate, more than a quarter of the text was deleted, most notably a scathing denunciation of the slave trade. It was no secret that Jefferson resented those changes. He noted at the time: passages were “struck out in complaisance to S. Carolina and Georgia, who had never attempted to restrain the importation of slaves & who on the contrary still wished to continue it. Our northern brethren also, I believe, felt a little under those censures; for tho' their people have very few slaves themselves, yet they have been pretty considerable carriers of them to others.”

Congress also struck out “those passages which conveyed censure on the people of England.” Jefferson's later reaction: “the pusillanimous idea that we had friends in England worth keeping terms with still haunted the minds of many.” 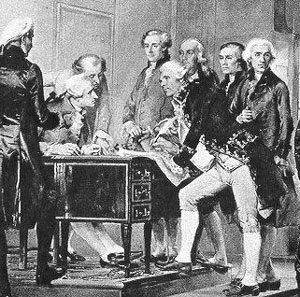 But to its everlasting credit, Congress saw fit to retain what has become “one of the best-known sentences in the human language” and “the most potent and consequential words in American history.”

"We hold these truths to be self-evident that all men are created equal, that they are endowed by their Creator with certain unalienable Rights, that among these are Life, Liberty and the pursuit of Happiness.”

It should also be noted that the word 'inalienable' appears in the original text, though this has come down over the years in printed versions as 'unalienable.' Blame it on Congress or the printer, "unalienable" is the word that survived.