by Michael Kolhoff In the 17th century, the settlers of Jamestown described the "tawny half-breeds" they encountered in the forests, who strangely preferred the freedom of the wilderness to the safety and comfort of Jamestown. Who were these people, these "half-breeds"? Theories as to the identity of this people range from the romantic (the survivors of the Roanoke colony) to the fantastic (the descendants of early Viking, Welsh or Phoenician settlers). In fact, they were members of fugitive (also called maroon) communities that existed on the outskirts of European settlement from the earliest days of colonization. The people called Melungeons (of eastern Tennessee, North Carolina, West Virginia and Kentucky,) were again encountered by European explorers of the Appalachians in 1654. They were described as dark-skinned, but with European features. They lived in log cabins and practiced Christianity and even spoke English, being able to communicate to the explorers that they were "Portyghee". The origin of the Melungeon people has become controversial, at least among Melungeons. The anthropologically accepted theory is that early Spanish settlers, explorers or castaways inter-married with Native Americans. Yet the French explorers mentioned above noted that the Melungeons they encountered spoke English (but called themselves Portuguese). This could indicate the amazing diversity of the Melungeon communities, or maybe the necessity of trading with the English settlements on the coast. Genetic researchers using the Mean Measure of Divergence (MMD) have concluded that Melungeons are most closely related to Libyans (0.017) and most distantly related to the Seminoles of Florida (0.308) [1] .The closest match with a European people (0.022) is Italian, followed by Portuguese (0.024). It's known that Francis Drake stopped at Roanoke for some months on his way back from raiding Spanish colonies in the Caribbean. He had several hundred Muslim seamen with him who had been freed from the Spanish and were being returned to Morocco and the Ottoman Empire. These would include Berbers and Arabs from Morocco, Algeria and Tunisia, as well as Greeks, Armenians, Albanians, Bosnians and Turks from Anatolia and the Balkans. They stayed several months in Virginia, and it's more than possible that they would have left progeny among the local Native American population. Some of them may have stayed and actually joined the Indians. The Delaware Moors are a mixed race people living in Kent and Sussex Counties, Delaware and southern New Jersey. How they came to be there is open to conjecture. Community legend tends toward three possibilities. In the first, an 18th century Spanish pirate ship with a Moorish crew is wrecked on the Delaware coast. The survivors are taken in by the local Nanticoke Indians and eventually marry Indian women. In the second, when the English abandoned Tangier in the late 17th century, the English garrison is given land in the Americas (Delaware). When they come they bring their Moorish wives with them. (There is an island in Chesapeake Bay called Tangier Island, and no one seems to know how it was named.) The third legend is of the truly romantic variety. This involves a beautiful woman and a dark-skinned slave. The woman was wealthy and either Spanish or Irish. She purchased a male slave who turned out to be a Moorish prince. They fell in love and had mixed-race children. Being ostracized by the white community, they moved inland and joined the Indians. Another version of this has the wealthy woman purchasing a number of Moorish slaves who ran away and joined the Indians. 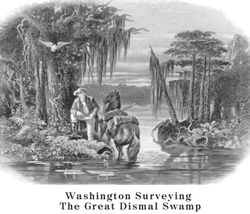