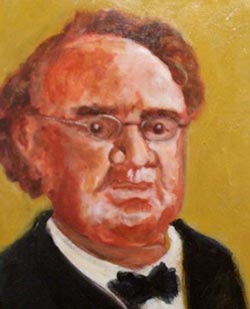 In 1793, seventeen years before the birth of the notorious circus proprietor P.T. Barnum, Americans in Philadelphia were treated to their first circus experience when John Bill Ricketts arrived on the scene from London with his "Equestrian Performance." Ricketts's circus took advantage of the current public interest in horsemanship and featured acrobats and skilled riders.[xxi] Animals, particularly exotic species, began captivating audiences, and by 1813 the first traveling menagerie traveled through New York.[xxii] Canvas tents were not used until 1825 and therefore semi-permanent structures were erected for various circus performances. Travel was often an arduous prospect and many of these 'arenas' were build in major towns simply because it was too difficult to carry large loads of building materials to smaller towns. While some museums such as William Clark's Museum (1816-1838) focused heavily on archeological artifacts,[xxiii] most others focused on scientific display. In 1810, John Scudder opened a museum of curiosities that would later become P.T. Barnum's American Museum. Even before the surge of science education into mainstream interests, Scudder's museum attempted to combine education and entertainment so that his museum appealed to a "liberal and enlightened public." A newspaper advertisement from the Evening Post praises this approach and reads; "To blend instruction with entertainment should be the object of every place of public entertainment; and in no place can the young mind be more benefited than at the [Scudder's] museum."[xxiv] Scudder expanded his collection, focusing mainly on zoological specimens and housed a variety of animals, as well as the peculiar curiosity, such as the bed curtains of Mary Queen of Scots.[xxv] We see the beginning of human displays on a larger scale after Scudder's death in 1821, when his son John Scudder Jr. took over the museum and "began to provide variety acts and freak shows" in order to encourage business, particularly away from Peale's museum.[xxvi] At this point, Americans were still looking to find entertainment in relatively close regions, but soon the invention of the electric motor in 1821, the construction of turnpikes, steamboats, the building of canals, and better roads allowed for the rapid growth of cities and eventually tourism on a larger scale.[xxvii] Canvas tents became the standard structure for housing large audiences— a design that allowed portability and convenience to traveling venues. It kept circuses moving into new towns and ultimately shortened the time a venue remained to as little as one day. Soon, even the smallest towns were visited by various circuses and entertainers and the public could choose between local and more distant amusements. In order to keep the public interested, advertising needed to 'catch the attention' of the American public, but fortunately, the first steam-powered presses appeared and decreased costs while increasing the size of the posters and distribution.[xxviii] Circuses increased in popularity and importance, as Roslyn Poignant writes, "Before the movies, the circus was probably the most influential instrument of mass culture in shaping public attitudes, through an extra-ordinary range of linked representational activities associated with publication and performance."[xxix] In 1830, the average American was sixteen years old, and as a result, popular forms of entertainment and amusement often corresponded with youthful activities.[xxx] It was not until the 1820's and 1830's that Americans began exploring natural wonders as tourist destinations. John Sears, for example, suggests that Americans turned to tourism and travel because it satiated the need to visit sacred, yet secular, places, and equally to establish a national culture (and identity) that was closely tied to nature.[xxxi] Those who visited these various attractions often referred themselves as "pilgrims," and visited tourist sites such as Niagara Falls, Mammoth Cave, The Connecticut and Hudson river valleys, the Willey House, Yosemite, as well as cemeteries, asylums, and parks.[xxxii] I would not like to suggest that tourism, in general, increased at this point. During the early years of the Republic, tourism existed as mostly endeavors to various museums and exhibitions in local towns or neighboring cities. The difference here involves extensive travel. The railroad became the standard choice of travel providing passengers with the option for long distance and overnight excursions, and later with the invention of the Pullman Sleeping Car, passengers could travel in further comfort. Tourists were now able to visit actual locations, instead of panoramas and painted images, although distance did not necessarily increase the validity of the site. It did, however, suggest an entirely different group of spectators. John Sears suggests that natural tourist destinations were non denominational and equally neither a male or female space, which contributed to the popularity of such destinations.[xxxiii] This is in direct contrast to the traveling circuses and exhibitions of the same period. Jack Larkin gives the following description, "The earliest American circus audiences were not, as they became much later, gatherings of families with excited children in tow, but adult and primarily male. The shows were clearly part of a masculine world whose boundaries were defined by liquor and the possibility of violence."[xxxiv] The masculinity factor was not simply found in seedy traveling entourages, but also in early fairs and expositions. The earliest exhibitions in the United States were usually centered on industrialization and progress (of machinery). One of the first major Expositions to be held in the United States, the American Institute Fair, was held annually in New York from 1829-1897. The American Institute Fair featured new and innovative American manufactured items and machines, as well as unique, pricey, and high quality items, which often invoked curiosity in those who could not afford such luxuries. Once again, the emphasis was placed on the attendance of men, and women were seen as an appendage. An advertisement in the New York Courier (1829) reads, "[t]he public generally were not permitted to enter [the American Institute Fair] without [tickets]. These were put at a low rate, 25 cents each, including any number of ladies, so as to afford every rank in society an opportunity to gratify their laudable curiosity."[xxxv] 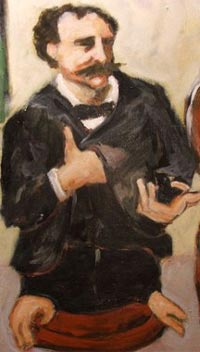