Sons of Liberty: Patriots or Terrorists?

by Todd Alan Kreamer SONS OF LIBERTY, or Sons of something altogether different? I suppose it all depends on a particular individual's point of view. For the American "armchair historian," this American Revolutionary organization conjures up a myriad of confusing images. But, what of this "secret" organization that played such an integral part in advancing the idea of American independence from Great Britain? What were the Sons of Liberty? Who were its members and how widespread was its support among the thirteen colonies comprising British America? What was the ideology and degree of political affiliation within the organization? Shrouded in secrecy, the origins of the Sons of Liberty are in dispute. Some historical sources claim that the movement began in New York City in January 1765. A more popular claim is that the movement began in Boston, Massachusetts through the leadership of one Samuel Adams (a well known American Revolutionary firebrand) in early 1765. It is quite likely that the Boston and New York City chapters of the Sons of Liberty were organized and developed simultaneously. Tradition has it that the Boston chapter gathered beneath the Liberty Tree for meetings while the New York City chapter met beneath the Liberty Pole for its meetings. For reasons of safety and secrecy, Sons of Liberty groups tended to meet late at night so as not to attract attention and detection of British officials and the American Loyalist supporters of the British Crown. This secret patriotic society had its roots in the Committees of Correspondence. The "Committees" were colonial groups organized prior to the outbreak of the American War for Independence and were established for the purpose of formally organizing public opinion and coordinating patriotic actions against Great Britain. These original committees were loosely organized groups of private citizens formed in the New York, Massachusetts, and Rhode Island colonies from 1763-1764. It was the Boston Committee of Correspondence that directed the Boston Tea Party action of December 16, 1773.1 Upset with the lack of redress concerning the new tax on tea established by the British government for importation of tea to Boston, a small band of the Boston Committee of Correspondence members (approximately fifty in number) led by Samuel Adams, proceeded to empty three ships worth and 342 chests of tea into Boston Harbor in protest.2 Was this an early terrorist action or a patriotic action. Surely, the answer lies with perspective. If you were a British official, this action was treasonous and punishable by death. If you were an American colonial citizen, this event would be seen as a glorious action of the freedom fighters worthy of praise, pride, and acclaim. 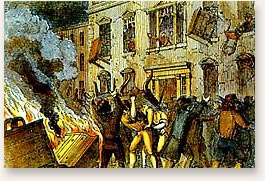