Peter Zenger and Freedom of the Press

In the latter part of 1733 John Peter Zenger began publishing a newspaper in New York to voice opposition to the onerous policies of newly appointed colonial governor William Cosby.

Upon his arrival in New York Cosby plunged into a rancorous quarrel with the Council of the colony over his salary. Unable to control the state's Supreme Court he removed Chief Justice Lewis Morris, replacing him with James Delancey of the royal party. 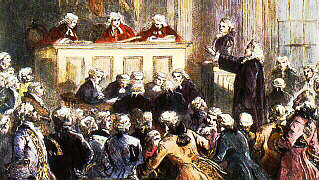 Zenger's lawyer stands up for freedom of the press courtesy, Chronicle of America

After more than eight months in prison, Zenger went to trial defended by illustrious Philadelphia lawyer Andrew Hamilton. The case was now a cause celebre with public interest at fever-pitch. Rebuffed repeatedly by Chief Justice Delancey during the trial, Hamilton decided to plead his client's case directly to the jury. After the arguments for both sides were finished, the jury was retired, only to return shortly with a verdict of not guilty.

To better understand the significance of this historic case it is important to examine an actual issue of the New-York Daily JOURNAL prior to Zenger's arrest. Here we see a typical attack against the government in Zenger's original newspaper as it originally appeared more than 260 years ago.

Page one of this issue dated February 25, 1733* carries an article by CATO,** a pseudonym for one of Zenger's authors. This article gave its readers a preview of the same argument Attorney Hamilton would present 18 months later in the government's libel case against Zenger: That the truth is an absolute defense against libel

In successfully defending Zenger in this landmark case, Hamilton established the precedent that a statement, even if defamatory, is not libelous if it can be proved, thus affirming freedom of the press in America.

As CATO prophetically writes in this issue of the JOURNAL:

"But this Doctrine ('A lible (sic) is not lefs a Libel for being true') only holds true as to private and personal failings; and it is quite otherwise when the Crimes of Men come to Affect the Publick?.Every Crime against the publick, is a great crime?.. "– The expofing therefore of Publick Wickedness, as it is a Duty which every Man owes to the Truth and his Country, can never be a Libel in the Nature of Things?. "– it has been hitherto generally understood, that there was no other Libels but those against Magistrates and those against private Men. Now to me there seems to be a Third set of Libels, full as Destructive as any of the former can probably be, I mean Libels against the People. "– I have indeed often wondered that the Inveighing against the Interest of the People, and calling their Liberty in Question?.has never been made an express Crime. "– I know not what Reason is if sapping and betraying the Liberties of a People be not Treason. "– almost all over the Earth, the People for one Injury they do their Governor, receive Ten Thousand from them. Nay, in some Countries it is made Death and Damnation, not to bear all the Oppression and Cruelties, which Men made Wanton by Power inflict upon those that gave it them."