The Battle of Bunker Hill

The sun was shining from a cloudless sky a little past noon on June 17, 1775 when a British force of 1500 men landed on Charlestown Heights in Massachusetts. Their objective: a surprise attack to nullify the threat posed by "rebel" batteries on the peninsula.

However, the night before for nearly twelve hours the Americans had worked non-stop building their main fortification on Breed's Hill which lay at the foot of Bunker Hill to the north. 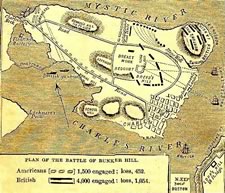 At daybreak on the 17th gazing through the morning fog, British General Howe was astonished to see a six-foot high earthwork a mushroom fortress that seemingly appeared overnight. "The rebels," he exclaimed, "have done more work in one night than my whole army would have done in one month." British cannons immediately opened fire from the ships offshore but the patriots continued work on the entrenchments without harm.

By mid-afternoon General Howe ordered his troops to advance and open fire. As the British moved forward, the Americans remained as silent as the tomb. "Don't fire until you see the whites of their eyes," was the order passed along the lines. When that moment came, the word "FIRE!" was shouted, and whole enemy platoons were mowed down and shattered, retreating to the foot of the hill.

In that final assault American General Joseph Warren and British Major John Pitcairn were killed. While the exact number of casualties varies among historians, the Americans were estimated at 441 killed and wounded...with the British casualties at 1,150 killed and wounded. Howe rallied his forces and repeated the attack with the same crushing results. Not to be discouraged, Howe rallied his men a third time, ordering them to use only their bayonets. After a desperate hand-to-hand struggle, the Americans were driven out.

In all of the twenty battles of the Revolution, Bunker Hill exacted a heavy toll on British officers. In this one battle alone one-eighth of the British officers in the entire War were killed and one-sixth were wounded on that day.

Following the earlier skirmishes at Lexington and Concord, the battle of Bunker Hill was significant in that it overruled any real hope of conciliation. The outcome of the battle rallied the colonies and moved a lethargic Congress to take action. Bunker Hill showed the Americans that the British were not invincible. It showed the British Government that the "rebels" were a serious opponent, that "the mightiest army in all of Europe" had a real fight on its hands.