Three Presidents and a University 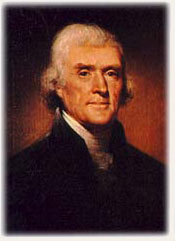 This is the saga of how three presidents, Jefferson, Madison and Monroe, established the University of Virginia. In this drama, Jefferson, third president of the United States, has a starring role; Madison, fourth president, a supporting part; and Monroe, fifth, a cameo appearance. The rest of the cast reads like a who's who in Virginia history, with legislators, judges, generals and governors. There has probably never been such an august assemblage of luminaries for the birthing of any other educational institution.

The plot line will last forty years with events reaching a quickening in 1814. The main antagonist, Jefferson, believed that a democracy could only survive with an educated citizenry. Therefore, he had been an advocate of public education at the elementary, secondary and university levels since the Revolution. My bill. . . is in fact and substance the plan I proposed. . . forty years ago, but accommodated to the circumstances of this instead of that day. . . . Mine, after all, may be a Utopian dream. . . . It is a bantling of forty years' birth and nursing, and if I can once see it on its legs I will sing sincerity and pleasure my nunc dimittass. (as cited in Mayo, 1942, p. 326)

This battle had been a long, and usually, unsuccessful one. He had seen his plan, over the years, defeated by a niggardly Virginia Assembly: "Legislators do not generally possess information enough to perceive the important truths, that knowledge is power, and knowledge is safety, and knowledge is happiness." (as cited in Padover, 1952, p. 170)

The final campaign for the establishment of the university was launched in the spring of 1814. The next five years would show Jefferson as a master political tactician and general.

In March, 1814, Jefferson (by his own urging) was elected as a trustee of the Albemarle Academy. Established in 1803, the Academy existed in name only. There were no buildings, teachers or students. But, it would provide the legal vehicle for the three presidents to create their university. Jefferson set forth the mechanization which would alter the Academy, first into Central College, and then the University of Virginia. Jefferson's field commander in this endeavor was Joseph Carington Cabell, a member of the Virginia Senate. Cabell has been described as "brave, patient, tactful, sagacious, resourceful, and of the highest integrity" (Arrowood, 1930, pg. 31). Jefferson leveled to him the task of marshaling his dream through the environs of Virginia politics.

It was Cabell who directed Jefferson's petition to the Assembly that certain public lands in Albemarle County be appropriated for the Academy, that the State make a yearly appropriation of money to the institution and that the Academy be allowed to call itself Central College (Henderson, 1970, p. 38).

The Virginia Assembly, on February 14, 1816, granted that part of the petition, which allowed Central College to come into being. To govern the institution a Board of Managers or Visitors was selected, which included President Monroe, and former presidents Madison and Jefferson. Cabell was also appointed a Manager (Henderson, 1970, p. 38).

Jefferson was elected Rector of the embryonic institution. Under his tutelage, ground was purchased and the cornerstone for the first building laid. Jefferson personally surveyed the land, drew the architectural plans and supervised the work. "Our Central College gives me more employment than I am equal to. The dilatoriness of the workmen gives me constant trouble. . . . I drew a plan of a college in it dormitories, such as the bill calls for. . ." (as cited in Mayo, 1942, p. 325). Jefferson was not entirely alone in his labors. He wrote John Adams that in May, 1817, Monroe, Madison and he were working at Monticello on their "collegiate institution" (Mayo, 1942, p. 326).

The Directors of Central College were not required to report their doings to the legislature, but the Presidents felt it was political to do so. The legislative report gave a favorable account of developments and emphasized Central College's statewide support through its monetary subscriptions donated outside the Charlottesville area. The report ended by declaring that the directors would gladly transfer to the state all property and rights of Central College if the Assembly, in its wisdom, should decide to establish a university and choose Charlottesville as the cite (Malone, 1981, p. 271).

Jefferson had long been lobbying his hometown as a location for the University: "Williamsburg is exposed to bilious fever during the months of August, September, and October. . . transfer then to a healthier and more central position; perhaps to the neighbor hood of this place" (as cited in Honeywell, 1964, p. 71). Health and central location (The name Central College was selected to convey this fact.) were not the sole reasons for Jefferson's advocacy of Charlottesville. There is no doubt that he realized that no university would carry his vision and ideas adequately unless it were under his immediate influence and personal supervision.

In 1817 and the early months of 1818, the Virginia Assembly took up, once again, various plans for a statewide education system. Jefferson, through Cabell, submitted his own comprehensive design for schools.

The bill would have authorized primary schools in every community; each school supported and controlled by the voters. Secondary schools would be located in districts throughout the state, governed by a board of visitors and supported by the state literary fund. The capstone was to be a university financed by the state (Arrowood, 1930, p. 35).

Jefferson's plan, despite Cabell's efforts, won little support in the legislature. What finally did pass was the mandate to establish just the university, endowed with the paltry amount of $15,000 per year.

A commission of twenty-four members was to be appointed to study the creation of the institution and report back to the Assembly on the contentious matters of: location of the university; a plan for its buildings' the branches of learning which should be taught; the number and types of professorships; and, the rules and regulations for the governance of the school. (Arrowood, 1930, p. 36)

To the sponsors of Central College, the first problem was the appointment of commissioners, since they were charged with the site selection. Various locations were being lobbied by powerful forces.

The municipality of Staunton wanted not only the university but the state's capital located in its environs. The College of William and Mary, long the seat of learning in Virginia, had strong backing. But, the competitor feared most by Jefferson was Washington Academy at Lexington. This school had been endowed by George Washington and the influential Society of Cincinnati supported its cause (Honeywell, 1964, p. 73).

The governor was to appoint the commission, one representative from each of the twenty-four senatorial districts, to meet at Rockfish Gap on the Blue Ridge, August 1, 1818. Cabell, a friend of the governor, James P. Preston, wished to put forth Jefferson's name as a candidate.

Jefferson felt that his presence on the Commission would do the cause of Central College more harm than good. The final say on all aspects of the university would come from the legislature and Jefferson knew that body contained much hostility toward him: "There are fanatics in religion and politics who, without knowing me personally, have long been taught to consider me as a raw head and bloody bones" (as cited in Malone, 1981, p. 275).

Cabell's gifts of persuasion must have been effective since the Governor appointed Jefferson in March 1818. Other members included Madison, Monroe, Cabell, Virginia's chief judge and other justices, a former governor, and a general (Arrowood, 1930, p. 36).

During the early summer of 1818, the friends of Central College were active. The three presidents met at Monticello and made plans for the founding of their university at nearby Charlottesville (Padover, 1952, p. 170).

Written authority to transfer property to the state was obtained and a deed was executed. Jefferson wrote to every county clerk in Virginia for information about the distance of his courthouse from some well known town and for facts about population, roads, and transportation. There is a tradition that during this time he complied a list of octogenarians in Albemarle County (Honeywell, 1964, p. 73)

On August 1, 1818, Jefferson, with twenty other Virginians met in the lush, green Blue Ridge Mountains at Rockfish Gap. Jefferson was chosen to be chairman of the commission. The first order of business was the selection of a site for the university.

During the initial discussion, Jefferson listened in silence until conflicting debate caused a stalemate. It was at this moment that Jefferson entered the fray.

His arguments were unexpected and unorthodox. He explained that the university should be in Charlottesville because the climate in that area was very salubrious. To prove this point, Jefferson produced his list of eighty-year olds in Albemarle County (Padover, 1952, p. 171).

Then, he surprised the commissioners with a cardboard map in the shape of Virginia of his own manufacture. "It was at this critical moment that he modestly drew forth that innocent-looking blunderbuss, his map, and quietly spread it out for the inspection of the body" (as cited in Honeywell, 1964, p. 75). The map showed that Charlottesville was in the geographical center of the state. Jefferson then produced another map which revealed that Albemarle County was also the center of the state's population when slaves were factored out of the distribution (Padover, 1952, p. 171).

The commission, overwhelmed by the shrewdly compiled data eventually voted unanimously for the Central College site. Later, in 1818 the legislature approved the choice.

Jefferson was selected Rector of the university and for the next six years lived only for its creation. He raised money, drew up architectural plans, procured workmen, hired faculty, and developed curriculum and rules of governance. What he created has been called, "America's first real university" (Peterson, 1960, p. 242).

His university contained several innovations. The substitution of the elective systems for a prescribed course of study, the dissolution of the ties between church and school, the switch from a predominately classical curriculum to one embracing technical and practical branches, the liberalization of disciplinary codes, and the development of specific studies such as political science (Peterson, 1960, p. 242).

The University of Virginia stands as one of three achievements that Jefferson was most proud. He can truly be called its "Father," but, it also had two god-fathers, Madison and Monroe.

Mayo, Bernard. (1942). Jefferson Himself. Charlottesville, The University of Virginia Press.