By Thomas O. Jewett
"Nature intended me for the tranquil pursuits of science, by rendering them my supreme delight." (Letter to DuPont de Nemours as cited in Benson, 1971). 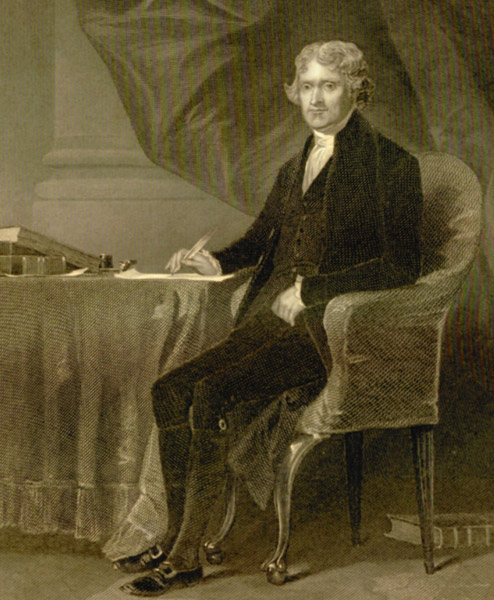 Thomas Jefferson, third President of the United States, was probably our most accomplished man in public life as well as the most versatile. President John F. Kennedy, while entertaining a group of Nobel Laureates, quipped that this was probably the greatest gathering of intellect in the White House since Jefferson dined there alone.

During his lifetime, Jefferson was an infallible oracle to half the population and a dangerous demagogue to the other half, but was universally recognized as a man of science. A fine mathematician and astronomer, he could reckon latitude and longitude as well as a ship captain. He calculated the eclipse of 1778 with great accuracy and was able to make suggestions for the improvement of almanacs on the equation of time. Jefferson was considered expert in anatomy, civil engineering, physics, mechanics, meteorology, architecture, and botany. He was able to read and write Greek, Latin, French, Spanish and Italian. He was recognized as a pioneer in ethnology, geography, anthropology and our subject paleontology. Because of his wide range of knowledge, Jefferson was ahead of his time in several lines of inquiry and advanced of contemporary scientists. Even so, Jefferson never failed to acknowledge that in science he was "an amateur."

As a scientific man Jefferson was interested in all lines of science, but in all rather as an enthusiastic, highly appreciative, an intelligent amateur rather than a professional. He had no time to make himself thoroughly proficient in any one line. The working out of the details he left to others, whom he assisted and encouraged, to the best of his ability. (Clark, 1943).

Jefferson was always ready to accept new discoveries and adopt new theories, even when they might contradict his own beliefs. In the spirit of the Enlightenment, with its faith in human reason and science, he maintained an open receptive frame of mind to all discoveries and scientific speculation. He believed that science held the key to knowledge for society, and this outlook, combined with his reformist, humanitarian, and utilitarian proclivities, motivated much of his life and thought.

Jefferson visualized science as essentially utilitarian. His sight focused upon the benefits that science could provide humanity. No matter what line of scientific investigation he undertook, the idea of ultimate practical application seems to always have been in his mind. He seemed never to have followed any line through mere pointless curiosity. Even in his study of fossils Jefferson appeared to have had the idea that at some time a knowledge of them would prove of value to his countrymen.

One of the first glimpses of Jefferson's interest in paleontology can be found in his Notes on the State of Virginia. It is his most impressive scientific achievement, in which he recorded his observations of flora, fauna, mountains, rivers, climate, population, laws, politics, customs and fossils of his native state. In Notes Jefferson, also, refuted the contentions of Count de Buffon that the animals common to both old world and new are smaller in the new. One of the reasons Jefferson wrote and published Notes was to refute a claim by the eminent naturalist, the Comte de Buffon, that human and animal life in America was degenerative and therefore inferior to the life forms in Europe. Buffon believed, Jefferson wrote in his Notes,"that nature is less active, less energetic on one side of the globe than she is on the other." Jefferson added with more than a hint of sarcasm, "as if both sides were not warmed by the same genial sun," and launched into a lengthy refutation of Buffon's hypothesis with convincing evidence that animals are actually larger in America than in Europe. The mastodon, or mammoth,was his clincher; Europe had produced no animal to match this behemoth...his shipment of mastodon fossils to Paris, therefore, was not entirely Enlightenment altruism; it was also a final salvo in a scientific war. Buffon's suggestion that infant America was nature's retardate drove him to collect the ancient bones of the mammoth...When he received his fossils, he catalogued them carefully and precisely, as was his habit, sending them off to Philadelphia for admiration, and to Paris for edification. He kept a few choice specimens, however, for his Monticello museum--trophies of a sort in commemoration of his private victory in the battle of New World versus Old. (McLaughlin, 1988)

The entry room at Monticello had been turned by Jefferson into a natural history museum which showed his great interest in fossils. George Ticknor, when a young man, visited Jefferson in 1815 and describes the entry hall:

On one side hang the head and horns of an elk, a deer, and a buffalo; another is covered with curiosities which Lewis and Clark found in their wild and perilous expedition. On the third, among many other striking matters, was the head of a mammoth, or, as Cuvier calls it, a mastodon, containing only os frontis, Mr. Jefferson tells me, that has yet been found. (Letter by George Ticknor, 1818 as cited in Rosenberger, 1953). These fossils were from the famous cache at Big Bone Lick, Kentucky. Jefferson had commissioned William Clark of the Lewis and Clark Expedition to explore the site, at his own expense. He kept the above mentioned specimens "for a special kind of Cabinet I have at Monticello." Jefferson's was particularly proud do this collection and considered them the prize of his natural history collection. The majority of the bones he sent on to the American Philosophical Society in Philadelphia. (Mclaughlin, 1988).

Evidence of Jefferson's interest in paleontology is furnished by his contributions in the form of reports and specimens to the American Philosophical Society, of which he was elected a member in 1786 and became its president in 1797. As a member, Jefferson took the lead in 1792 in raising a thousand guineas to send Andrew Michaud across the continent to find out about...the bones of a mammoth...(Curtis, 1901). On August 19,1796, he wrote a report to the Society (his only truly scientific report) describing bones of extraordinary size found beyond the Blue Mountains in Virginia. (Clark, 1943). In Greenbriar County, Virginia, in 1796, a deposit of bones, supposed to be those of a mammoth, were found and sent to Monticello, where Jefferson set them up and pronounced them to be those of "a carnivorous clawed animal entirely unknown to science."

A curious sight might have been witnessed by people who lived the route of travel between Monticello and Philadelphia when the Vice President of the United States, on his way to take the oath of office and assume the second place in the gift of the nation, carried a wagon-load of bones for his baggage. He delivered them to Dr. Wistar, the naturalist of the American Philosophical Society, with a labored report under the date of March 10, 1797, entitled, "A Memoir of the Discovery of Certain Bones of an Unknown Quadruped, of the Clawed Kind, in the Western Part of Virginia. (Curtis, 1901).

The Society passed a resolution to publish the report and requested Charles Peale to put the bones in the best order for Society use. These were the bones of Megalonyx, later named "Megalonyx Jefersoni", the first giant sloth found in North America. (Clark, 1943).

Jefferson was head of the Society when that organization financed the excavation of the bones of a mastodon in Ulster County, New York in 1801. This was during the exciting and close contest Jefferson was waging for the Presidency. Even so, we find him carrying on a learned correspondence with Dr. Wistar over the fossils.

This interest in paleontology often brought him the ridicule and wrath of his political opponents to whom scientific investigation meant neglect of his proper duties. This was particularly true in 1808 when the excitement over the embargo of commerce and the complications with Great Britain were at it height, he had a wagon load of specimens sent to the White House. Here he laid them out in the unfinished East Room, nicknamed the "Bone or Mastodon Room." (Clark, 1943). "Mr. Mammoth" as Jefferson was nicknamed was also roasted in poem for his delight in fossils.

Go, wretch resign thy presidential chair, Disclose thy secret measures, foul and fair, Go search with curious eye, for horned frogs, Mid the Wild Louisianian bogs: Or, where the Ohio rolls his turbid stream, Dig for huge bones, thy glory and scheme. (As cited in Clark, 1943).

Paleontology seems to have been Jefferson's main interest in a pure science. Some such as Frederick Lucas and Henry Osborn have dubbed him the "Father of Paleontology". They felt that Jefferson laid the foundations of the science with his refutation of Buffon's degeneracy theory, his invention of "stratigraphical" observation which established the fundamental principle of scientific excavation (Lehmann, 1985), and his work on the Megalonyx.

There are some though, who feel that Jefferson does not deserve the title. They argue that the entire basis of his beliefs about paleontology were mistaken since he denied that any animal species could ever become extinct. "Such is the economy of nature, that in no instance can be produced her having permitted any race of her animals to become extinct." (As cited in Curtis, 1901). It is this reasoning which allowed Jefferson to put forth the theory that there was a large herd of mammoths wandering wild in the Mississippi Valley and one of the reasons he sponsored expeditions to the West.

Perhaps Jefferson's greatest contribution to paleontology is that while President he helped to make it a respectable pursuit and was largely responsible through the American Philosophical Society for bringing together the materials necessary for its advancement. As the first citizen of the young nation, Jefferson's passion brought prestige and respectability to the young science.