Benjamin Franklin "The Father of all the Yankees"

"The Father of all the Yankees"

by James J. Kirschke "The Father of all the Yankees," thus does the eminent Scottish historian Thomas Carlyle (1795-1881) refer to the subject of this essay.(1) And many subsequent authors have in effect echoed Carlyle's unqualified assessment of the sage Benjamin Franklin. Much evidence from Franklin's career supports such judgments, despite his long-term removal from the American colonial scene for all but two years during the crucial years before the Revolution. In 1754, at the inter-colonial conference, held in Albany, New York, he presented the first definite plan to unite the American Colonies for mutual protection and improved government. By making public, in 1772, the insulting, denigratory, and presumed confidential, correspondence of Royal Governor Thomas Hutchinson (1711-1780), of Massachusetts, to a recently deceased British governmental official, Thomas Whateley (d. 1772), Franklin greatly inflamed already aroused anti-British American sentiment. Franklin's quill pen also produced a number of timely and excoriating anti-British satires, such as "Rules by Which a Great Empire May Be Reduced to a Small One" and "Edict by the King of Prussia" (both 1773). 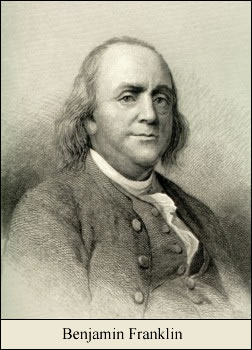