By Philander D. Chase When George Washington set out from Mount Vernon on May 4, 1775, to attend the second Continental Congress in Philadelphia, little did he know that more than six years would pass before he again saw his beloved home on the Potomac and that even then, in September 1781, he would spend only a few days under his own roof before traveling on to Yorktown to fight one of the most decisive battles in history. Washington's acceptance on June 16, 1775 of the position of commander in chief of all American forces did not change his expectation that his absence from Mount Vernon would be short. As all soldiers are wont to do, General Washington believed in the summer of 1775 that he would be home by Christmas. But as the war lengthened interminably, stretching out to eight and a half years in all, Washington realized that the struggling American cause could ill afford him the luxury of a long furlough at home. The lack of a strong central government and of a dependable standing army of well-trained veterans meant that more often than not it was George Washington who had to pick up the pieces when the American cause was in deep trouble and put them back together as best he could. 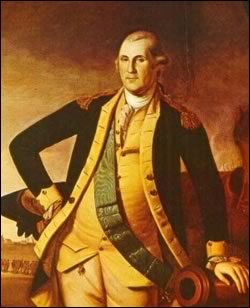 General Washington was a very busy man during the Revolutionary War. He spent surprisingly little time, however, fighting battles or even riding one of the handsome horses astride which artists like to depict the general. A visitor to headquarters most likely would find General Washington at his desk immersed in paperwork. He wrote far more than he rode, a fact that was not particularly pleasing to him. During the eight and a half years that Washington served as commander in chief of the Continental army, he probably wrote as many or more letters than he did during all the rest of his life put together. The thirty-five volumes projected for the Revolutionary War Series of the Papers of George Washington will be a testament not merely to the great volume of his wartime correspondence, however, but also to its great importance. As burdensome as Washington found his almost daily letter-writing chores to be, he persisted in employing his own pen and those of his several aides and secretaries at every opportunity, because letters were more important than shot and shell in winning his most important battles: the fight to preserve his army and make it an effective fighting force, and the fight to convince his diverse fellow citizens to lay aside their differences and rally to the support of the American cause. Praising, complaining, scolding, cajoling, exhorting, and instructing as necessary, Washington wrote not only to congressmen, governors, and generals, but also to state legislators, local committeemen, militia officers, and private citizens to achieve his ends. Given Washington's great wartime responsibilities, he might be forgiven if he banned thoughts of Mount Vernon from his mind for the duration of the war. That he did not reveals just what an indispensable part of his life that his home on the Potomac was. Within a week of his taking command of the Continental Army at Cambridge, Mass., in July 1775, Washington began a regular correspondence with his distant cousin Lund Washington, who served as manager of Mount Vernon throughout the war. Although events disrupted that correspondence on occasion, and many of the letters that these two men exchanged unfortunately have been lost, their surviving correspondence, which is being printed in the Revolutionary War Series, offers a rare view of Mount Vernon, because in these letters the general and his manager put down on paper the sort of remarks and observations about the mansion and plantation that they otherwise would have simply spoken in face-to-face conversation. 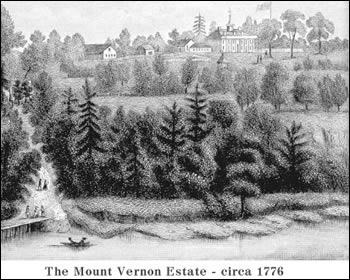 These letters also show that although Washington did not see Mount Vernon for many years, he could call up in his mind's eye a vivid picture of any room in the mansion or any field on the plantation. Writing to Lund in August 1776, only a few days before the Battle of Long Island, the general displays his mastery of detail in his instructions for planting trees around the mansion, which was then being enlarged with the addition of the south and north wings. "I mean to have groves of Trees at each end of the dwelling House," he wrote Lund,

that at the South end to range in a line from the South East Corner to Colo. Fairfax's, extending as low as another line from the Stable to the dry well, and towards the Coach House, Hen House, & Smoak House as far as it can go for a Lane to be left for Carriages to pass to, & from the Stable and Wharf. from the No. Et Corner of the other end of the House to range so as to Shew the Barn &ca. in the Neck--from the point where the old Barn used to Stand to the No. Et Corner of the Smiths Shop, & from thence to the Servants Hall, leaveng a passage between the Quarter & Shop, and so East of the Spinning & Weaving House (as they used to be called) up to a Wood pile, & so into the yard between the Servts Hall & the House newly erected--these Trees to be Planted without any order or regularity (but pretty thick, as they can at any time be thin'd) and to consist that at the North end, of locusts altogether. & that at the South, of all the clever kind of Trees (especially flowering ones) that can be got, such as Crab apple, Poplar, Dogwood, Sasafras, Lawrel, Willow (especially yellow & Weeping Willow, twigs of which may be got from Philadelphia) and many others which I do not recollect at present--these to be interspersed here and there with ever greens such as Holly, Pine, and Cedar, also Ivy--to these may be added the Wild flowering Shrubs of the larger kind, such as the fringe Tree & several other kinds that might be mentioned.

Lund Washington responded in comparable detail at the general's repeated insistence, but with rather poorer spelling. "The Dineg Room will I expect be finishd this week now come in," Lund wrote the general on November 12, 1775.

It is I think very Pretty[.] the Stucco man agrees the Cielg is a Handsomeer one than any of Colo. [Fielding] Lewises, altho not half the worck in it . . . . I think it rather two late to Turf the Ha Has; for the ground freazees now every Night--but it shall be done very early in the Spring--we have done nothing to the Gateways--The Posts that were made for them, will be to do over again, for altho they have been twice Painted, they are rent all to pieces, they no doubt put plank on them not well seasoned[.] I intend to have the Stuff try'd up for the pallisadoes this Winter, but I am unwiling to put them up for I really am at a loss for the just proportion of each particular part, nor have I any body to direct me[.] I have once or twice talk'd to Lanphier [the carpenter] about it but he mouths & talks in such a way that I do not understand him--I mean as to the dementions of the Pallisades--Sils, rails, Posts, & different Heights, but I cannot see that it will make any difference whether that worck is first or last done.