The Battle of Blue Licks

The Battle of Blue Licks happened on August 19, 1782; ten months after Cornwallis had surrendered at Yorktown. This bloody frontier encounter is usually noted as the last combat of any size of the Revolutionary War. It took place near a salt spring along the Licking River in Central Kentucky north of Boonesborough and Bryan's Station. It was the most successful part of the invasion of an almost 1000 strong combined army of Ohio Indian Nations warriors, British Regulars and Queen's Rangers into Kentucky and West Virginia.

On August 2nd, one of the largest congresses of the Ohio Indian nations confederation was held at the principal Shawnee town of Chalahgawtha, then on the Little Miami River. Present were contingents from all the Ohio nations. Simon Girty, one of the principle organizers of the congress, learned that a group of 50 redcoats under Capt. William Caldwell in company with Iroquois and Mingoes led by the Mohawk leader Joseph Brant and the Tory Alexander McKee were headed south from Detroit to attack Wheeling. After riding long and hard to intercept them, he persuaded them to join the gathering at Chalahgawtha. There, speaking before a council of all participants, he outlined a plan that led to the frontier people south of the Ohio's worst defeat in their long war with the Ohio Indians--the Battle of Blue Licks. 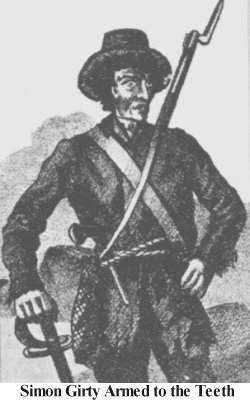 The plan was to draw the Kentucky Militia into an ambush. The Indian and British force would invade; their immediate targets would be Bryan's Station and Lexington, just six miles apart in Central Kentucky. The Americans under Williamson were back at their more easterly settlements in Pennsylvania and Wheeling and they were alert to danger, he argued. Thus, he continued, an invasion would have more success attacking in Central Kentucky where it would not be expected.

Half or more of the expeditionary force would hide at Blue Licks, he proposed, while the remainder would proceed on to attack Bryan's Station, which Girty knew to be weak and undersupplied. They would watch the station until a few people were outside the fortification, and then they would attack, allowing the few outside the walls to escape knowing that they would run straight to Lexington for help; Lexington was strongly manned and provisioned.

No one doubted that Lexington would send out a rescue force; The rescuers would be who the Indians would really be after. The Indians' spies would know the rescue force's size as soon as it began to move toward Bryan's Station; if it was small enough, they would simply waylay the Kentuckians en route. If the Kentuckians were too many, the Indians would retreat making sure that the Kentuckians followed closely so as to lead them back to Blue Licks where the much larger remaining Indian force would lay in ambush. The value in the plan, Girty emphasized, was that when the Kentuckians saw as large a force of Indians as the Bryan's Station attackers would be, and seeing in addition that they had British soldiers with them, none would never believe that there could be as many more waiting in ambush.

The expedition was mounted. Half the invading force hid itself at Blue Licks and the remainder went on to lay siege to Bryan's Station, being careful to allow a few to escape and run to Lexington for help. The first rescue force was fifty men strong; it was quickly beaten off by the invaders. The Indians did not bother to use their ambush strategy; not enough attackers; they were after bigger game. 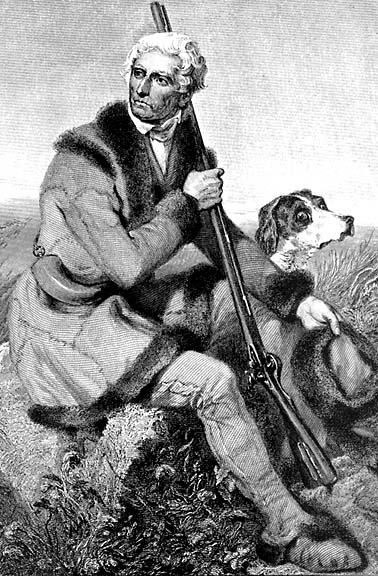 Next day 180 Kentuckians converged on the place only to find the Indians gone. This militia force was composed of several groups from neighboring counties and stations and, as was the usual case, the leadership consisted of the various militia leaders working more or less in cooperation with each other. Daniel Boone was leader of 45 Fayette County militia under the general leadership of John Todd, an upper class lawyer from Virginia who had served in the Vincennes campaign with Clark. The other major contingent was from Lincoln County and under the leadership of Stephen Trigg who was assisted by Hugh McGary of Harrodsburg.

The officers immediately held council to decide whether they should pursue the retreating Indians immediately or wait for Colonel Benjamin Logan, who they knew to be about a day behind them travelling in their direction with a force of several hundred. McGary was mentally unstable. He had lost family to Indian attack five years earlier and, since then, had become increasingly hostile and combative to virtually all who had to deal with him. All the same, he urged caution and spoke for waiting for Logan to catch up with them. Todd criticized McGary as being "timid" and stated that they could not afford to let the Indians get away. Finally, they decided to take up the chase the following morning. McGary, insulted by Todd's comments, nonetheless held his tongue for the time being.

Next day the Americans followed the Indian army's trail to within a few miles of the Lower Blue Licks. Boone grew increasingly upset with what he was seeing; the Indians were making no effort to conceal their passage; in fact, they were doing everything they could to make their trail easy to follow. They littered the trace with their garbage, they cut blazes on trees where they passed; Boone also saw evidence that they were walking in each other's tracks so as to conceal their actual numbers. He saw ambush in everything the Indians were doing.

Early the next morning, August 19, 1782, a Monday, the Americans arrived at the south bank of the Licking River near the Blue Licks salt springs. The river makes a sharp loop here around a bare, rocky hill on the side opposite the Americans. The Indian army lay hidden in a series of wooded ravines at the crest of the hill. As the Americans assembled on their side of the river a group of warriors appeared in plain view on the hilltop. They were the decoy.

Todd and Trigg called another officers' council; about fifteen men were there in all. Included were Boone and McCary.