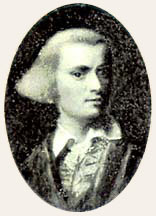 By the mid-1700's the portrait was virtually the only art form available to the American painter. Portraiture was in great demand in the colonies and was sufficient to support a small number of artists.Watson and the Shark

Foremost among these was John Singleton Copley. Born in Boston in 1738, Copley was influenced by the mezzotints of his stepfather, Peter Pelham, and the portraits of local portrait painter John Smibert. Copley painted both the young and the aged but emphasized setting to convey the desired mood.

Ladies posed before fine furniture and textured draperies; men were surrounded by books and tools, hunting dogs and guns. His style was straightforward and realistic, creating portraits of great strength.

Among his many 'subjects' were portraits of John Hancock, Samuel Adams, John Adams and countless lords and ladies of his era, both in America and in London. 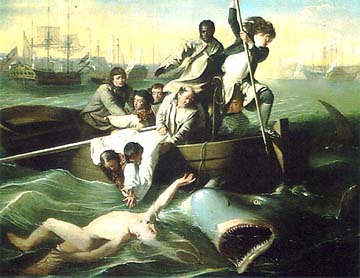 Watson and the Shark

Eventually, Copley wearied of Boston where, he felt, painting was valued only as a useful craft. The public was "entirely destitute of all just ideas of the arts," so he left for London in 1774. After the painter's obligatory tour of Italy and then settling down in London, Copley turned to historical and religious paintings on a grand scale.

In London he exhibited his famous Watson and the Shark, depicting a real-life event that occurred in Havana harbor. The painting portrays Brook Watson, a friend of the painter, who, as a boy, lost his leg to a shark while his friends struggle to rescue him in the water. Today, this work is considered to be an early landmark of romanticized contemporary history painting.

Another of his major works is The Death of Major Pierson, January 6, 1781.