Who was Patrick Henry? And why do we remember his words?

To understand the man and the event, let's go back in time.

The date is Thursday, March 23, 1775. The place: St. John's Church in Richmond Virginia. The event: A meeting of Virginia's colonial leaders at the Second Virginia Convention.

Henry was the delegate from Hanover County at the meeting to discuss the recent proceedings of America's First Continental Congress. Peyton Randolph was President of the Convention attended by 120 delegates, including such notables as George Washington, Thomas Jefferson and Richard Henry Lee.

The meeting turned into a series of debates over whether or not to arm the colony of Virginia as a defense against possible incursions by the British army.

Henry's reputation as a fiery and passionate orator preceded his appearance at the convention. A prominent lawyer, Henry twelve years earlier won renown in arguing the Parson's Cause at the Hanover County Courthouse. During that case he described the King as "a tyrant who forfeits the allegiance of his subjects." Two years later in 1765 his Virginia Stamp Act Resolutions before the House of Burgesses were met with angry cries of treason. Henry's reply: "If this be treason, make the most of it."

At the end of the four-day meeting in Virginia Patrick Henry rose to deliver his speech, facing his fellow delegates. He forcefully urged them to establish a defense of Virginia, arguing that the colony needed a "well regulated militia." It was imperative, he declared, that Virginia be prepared to oppose King George III. He ended his impassioned speech for independence with the words:

"I know not what course others may take, but as for me, give me liberty or give me death."

Many at the meeting were loathe to oppose the mother country, instead favoring conciliatory measures. But Henry's stirring and persuasive call to arms won the day, and the delegates voted to support his resolutions.

Thomas Jefferson described Henry as the man who "set the ball of Revolution rolling" in Virginia. Patrick Henry's immortal words have been described as "the most famous cry for freedom in the world."

Patrick Henry was a lawyer, patriot, orator and a participant in every phase of America's founding. But even more than that, Patrick Henry became a symbol of America's struggle for liberty and self-government. 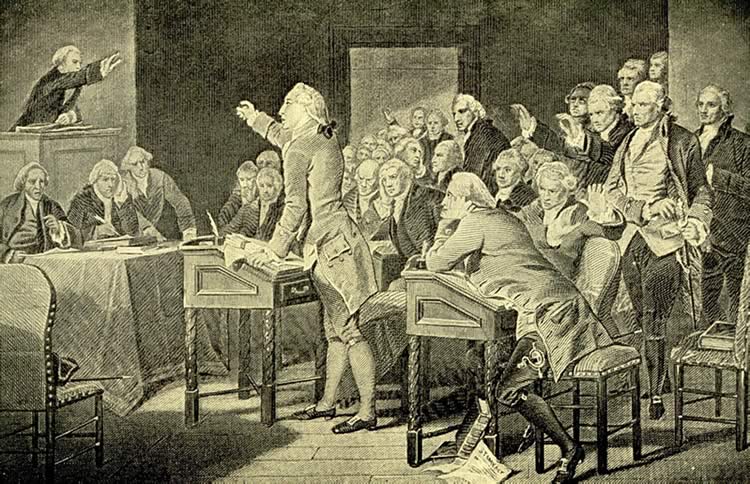