The First Boston Edition of The Rights of Man

A Political Pamphlet by Thomas Paine Published in 1791

The Rights of Man: Being an Answer to Mr. Burke's Attack on the French Revolution....Third Edition. Boston: I. Thomas and E.T. Andrews, 1791. The edition runs 79 pages. It has marginal browning but is in very good condition.

The front of this edition contains an extract of a letter from Secretary of State Thomas Jefferson: "I am extremely pleased to find this will be reprinted, and that something is at length to be publicly said against the political heresies which have sprung up against us." This was a direct slap at the Vice-president John Adams.This is the first edition printed in Boston (the third American edition). The Rights of Man was published in two parts. This edition — Part The First — was printed in 1791 and dedicated to George Washington. The second part, entitled Part The Second, followed in 1792. 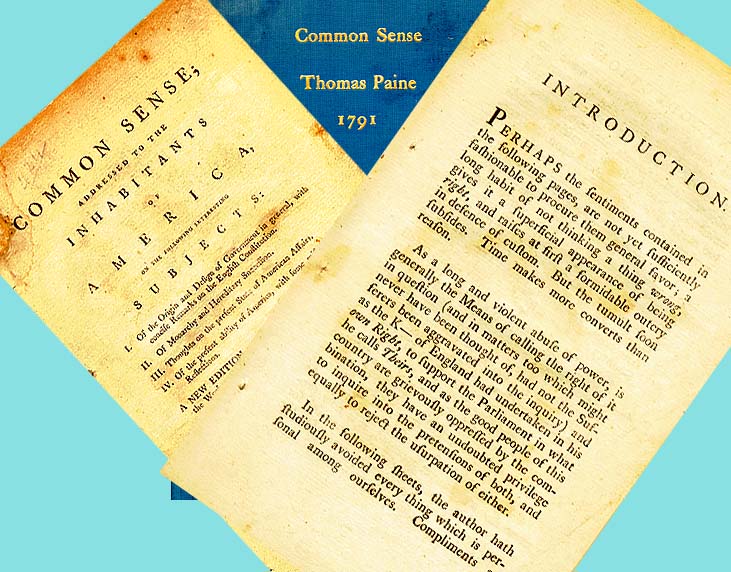 After the war Thomas Paine returned to England in 1787. Soon after the opening phase of the French Revolution, Britain's foremost statesman, Edmund Burke, wrote Reflections on the Revolution in France, a scathing denunciation of the people's movement in France. Burke's attack infuriated Paine, who promptly set out to write his defense of the French Revolution. In so doing he produced one of the finest statements of eighteenth century democratic philosophy ever formulated.

When The Rights of Man was printed in America, it created a new sensation. Not because of the principles outlining American Jeffersonian democracy, but because the publisher had printed in the front of the book remarks from a letter from Thomas Jefferson, in which Jefferson pointed a finger at Vice-president Adams.

In England The Rights of Man encountered a response like no other in English publishing history. The poor pooled their pennies, supplementing it with meager savings to buy the book. The Rights of Man became an underground manifesto, passed from hand to hand, even when it became a crime to be found with it in one's possession.

The book became a bible to thousands of citizens who dreamed of a free England. Time after time, when men were tried for treason, invariably the Crown offered as evidence to the jury the fact that these men possessed a copy of The Rights of Man.

Outlawed for treason, Paine fled to France in 1792, never to return to England again.

And what of the revolution that Paine had started in England? Three generations would pass before even a small part of the things Paine pleaded for in his book would see fruition. Observed biographer Howard Fast:

"Yet one cannot say that the book had no effect. It shook the government; it set thousands of people to thinking. It stirred the currents in what had been placid water, and once stirred, those currents never stilled themselves. And not only in England, but everywhere men longed for freedom, Rights of Man became an inspiration and a hope."

All of Paine's works reflected his belief in natural reason and natural rights, political equality, tolerance, civil liberties, and the dignity of man.

Paine has been described as a professional radical and a revolutionary propagandist without peer. Born in England, he was dismissed as an excise officer while lobbying for higher wages. Impressed by Paine, Benjamin Franklin sponsored Paine's emigration to America in 1774.

In Philadelphia Paine became a journalist and essayist, contributing articles on all subjects to The Pennsylvania Magazine. After the publication of Common Sense, Paine continued to inspire and encourage the patriots during the Revolutionary War with a series of pamphlets entitled The American Crisis. Eventually, Paine went on to write The Rights of Man.

When Paine wrote Common Sense he was venturing into uncharted waters. By the time he settled into writing The Rights of Man, he did so with hindsight and deliberately set out to write a document that would shake the whole fabric of England.

The Rights of Man has stood for more than two centuries, pointing out paths in democratic government. Even today, it would be considered radical by many.

It is one of history's ironies that the volume written by one of England's greatest statesman is by and large forgotten....while Thomas Paine's answer to it has become a classic.