My ancestor Pedro Francisco was born on July 9, 1760, to a wealthy family in the beautiful Azores Islands. At five years of age, Pedro’s life changed forever when pirates kidnapped him and abandoned him on a dock in Virginia six weeks later, never to see his family again. 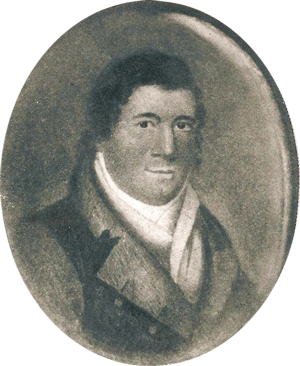 A monument now stands in Hopewell, Virginia, marking the place where he was found.

Despite his fine European clothes, his fate was ultimately decided by his dark, swarthy skin color. In the New World, his name was changed to Peter, and Judge Anthony Winston, Patrick Henry’s uncle, took him in to work on his 3,600-acre plantation. The Judge had several children of his own who received a good education, but Peter was treated as a slave and was not taught to read or write. He remained illiterate until after the war.

In March of 1775, Peter accompanied Judge Winston to the Virginia Convention at Saint John’s Church in Richmond. Peering through the window of the church, Peter heard Patrick Henry’s rousing oration “Give me liberty or give me death!”, and a passion for freedom ignited within him.

Francisco was a giant, standing 6 feet 6 inches tall and weighing 260 pounds, when he joined the 10th Virginia Regiment in December of 1776 at the age of sixteen. Standing a foot taller than most men on the battlefields of the Revolutionary War, Peter’s massive frame was too big for the average-sized sword, a problem George Washington would later remedy.

Peter’s military record followed most of the major battles of the Revolution in the North and South. He was wounded in the battles of Brandywine and Monmouth and was even hospitalized during the bleak winter months at Valley Forge with George Washington’s men. But it was the Battle of Stony Point on the Hudson River where Peter Francisco became known as the “Hercules of the Revolution.” 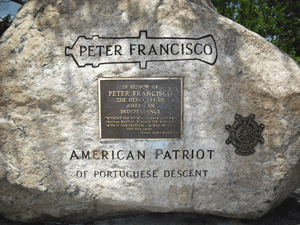 In the summer of 1779, George Washington assembled a team of twenty commandos to forge a path through a swamp and scale a 300-foot rock face wall to get inside the British fortress. Peter was the second man over the wall and killed two Redcoats before taking a nine-inch bayonet wound to the abdomen. With blood pouring out of his torso, he reached the Union Jack flag and collapsed on it as the Continental Army stormed the fort. Francisco was one of three commandos that survived, and there is a monument in New Jersey, not far from the Hudson River, in his honor.

By the time Peter’s wound healed, the fighting had moved south. Francisco was at the Battle of Camden in South Carolina when the Continental Army was in a disorderly retreat. At one point, he wheeled to shoot a British Grenadier, saving Colonel Mayo from impending death and allowing him to escape. Subsequently, one of Tarleton’s cavalrymen advanced; Francisco brawled and bayoneted him right out of his saddle. Mounting the steed, Peter impersonated a Tory and road through enemy lines until he caught up to Colonel Mayo, whom he insisted ride the horse to safety. He then used his Samson-like strength to hoist an 1,100 pound cannon out of its carriage and onto a horse-drawn wagon. A 1976 bicentennial stamp immortalized this phenomenal feat. 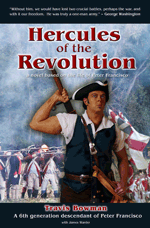 Travis Bowman's Hercules of the Revolution is a self-published work.

George Washington commended the courageous young soldier when he said, “Without him, we would have lost two crucial battles, perhaps the war, and with it our freedom. He was truly a one-man army.” These famous words are now engraved on a monument in Peter Francisco Square in New Bedford, Massachusetts.

Peter’s tall genes have been passed down through the generations to me, and I, too, stand 6 feet 6 inches. I’ve also been told that I resemble his 1798 portrait, so I posed for the front cover of my recent historical novel Hercules of the Revolution, which has been called “The American Braveheart Story.”

The Peter Francisco Story, A PBS documentary hosted by Travis Bowman, aired in December 2010. Travis Bowman’s Hercules of the Revolution is a self-published work. For more information, call (877) 783-8380 or visit www.herculesoftherevolution.com.