The Proclamation Against Patrick Henry

On January 19, 1775, the royal governor of Virginia, John Murray, fourth Earl of Dunmore, stood at the pinnacle of his popularity. Fresh from his October 1774 victory over the Shawnee at the Battle of Point Pleasant on the Ohio River, Dunmore opened the Palace in Williamsburg for a grand ball celebrating the queen's birthday and the christening of his newest daughter, Virginia. Within six months of that Thursday-evening gala, however, the movement toward independence and the actions of Patrick Henry would force Dunmore and his family to flee the Palace as the royal government of the Old Dominion collapsed at their heels.

Virginia's second revolutionary convention met in March at St. John's Church in Richmond, safely beyond the governor's reach. On Thursday, March 23, Patrick Henry's eloquent Liberty or Death speech assured the passage of his resolution to place the colonial militia in a posture of defense. Two days later, the convention elected Henry and six others as Virginia's representatives at the Second Continental Congress slated to begin on May 10. Only the 107 ballots cast for Peyton Randolph, Speaker of the House of Burgesses and President of the Continental Congress, and 106 for George Washington surpassed the 105 votes that sent Patrick Henry to Philadelphia. That same day, despite their quarrel with Parliament, the delegates unanimously acclaimed "our worthy Governor Lord Dunmore, for his truly noble, wise and spirited Conduct in the late Expedition against our Indiana Enemy . . . [and] important Services to the People who have the happiness to live under his Administration." Their applause was brief indeed. 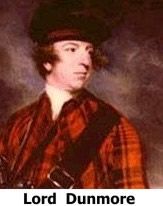 The following Tuesday & three days too late & newly arrived instructions from Lord Dartmouth prompted Dunmore to issue a useless proclamation forbidding the election of delegates to the Continental Congress. The governor's next step, even more provocative, brought a confrontation with Patrick Henry that Dunmore's authority did not survive.

The passage of Patrick Henry's resolution "raising a body of armed Men in all the counties," Dunmore reported to Lord Dartmouth, "made me think it prudent to remove some Gunpowder which was in a Magazine in this place." The governor gave a key to the Magazine & the octagonal munitions depot surrounded by a high brick wall in the center of Williamsburg & to Lieutenant Henry Colins, commander of H.M.S. Magdalen, an armed schooner anchored in the James River a few miles from town. Before dawn on Friday, April 21, Colins and a detachment of royal marines slipped into town and entered the Magazine. As they were loading the fifteenth half-barrel gunpowder onto the governor's horse-drawn wagon, their raid was discovered. Shouts and then drums woke the town as the independent militia company scrambled to the scene. Later in the day, Speaker Randolph and others averted bloodshed in the capital, but by evening riders were carrying word of Dunmore's "prudent" raid throughout the colony.

On Sunday the governor raged that he would "declare Freedom to the Slaves, and reduce the City of Williamsburg to Ashes" if he were attacked. "I once fought for the Virginians," Dunmore warned a startled alderman. "By God, I would let them see that I could fight against them."

By Monday news of the powder incident had reached Hanover County and Fredericksburg, where independent militia companies had gathered for a routine drill. Upon advice from George Washington, the Fredericksburg area militia & 600 strong & "held themselves in readiness" to march on Williamsburg. In Hanover, Patrick Henry and the militia stood ready as well. At this critical moment & on April 28 & news reached Virginia of the shots fired at Lexington and Concord nine days earlier.

Five weeks earlier, in his celebrated speech at St. John's Church, Patrick Henry had warned that "the next gale that sweeps from the north will bring to our ears the clash of resounding arms!" Events had proved him right. Now Dunmore's "prudent" theft of the colony's powder confirmed the Virginians' worst suspicions of the British ministry and its minions in America. While Peyton Randolph and several other congressional delegates set off for Philadelphia, militia from the piedmont counties of Albemarle and Orange continued their march toward the capital. Henry and the Hanover militia were well ahead of them, camped at Newcastle on the Pamunkey River twenty miles north of Richmond to plan "a rapid and vigorous movement to compel the restoration of the powder."

Dispatching Ensign Parke Goodall and sixteen men to Laneville plantation in King and Queen County, home of the crown's Receiver General Richard Corbin, Patrick Henry marched toward the capitol. By Tuesday, May 3, Henry had between 150 and 500 men bivouacked sixteen miles west of Williamsburg at Doncastle's Ordinary in New Kent County. That same day, as Lady Dunmore and their children slipped aboard H.M.S. Fowey at Yorktown, Governor Dunmore sent urgent messages to Boston asking for reinforcements. 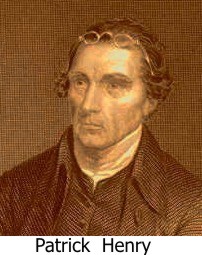 A standoff continued for several days as messengers from the town urged Henry to bide his time. Dunmore had moved cannon to the front of the Palace, they said, and was threatening to destroy the Williamsburg at "the very moment one hostile Virginian should enter it." Rumor had it that upon hearing Dunmore's cannon, Captain George Montagu of the Fowey had orders to "perpetrate the same atrocity" at Yorktown. As the war of nerves played out, Carter Braxton, Corbin's son-in-law, arranged for a payment of lb330 compensation for the stolen powder. With receipt in hand, Henry dispersed his troops and prepared to join his colleagues in Philadelphia.

From the safety of his Palace, Lord Dunmore vented his anger in a proclamation against "a certain Patrick Henry, of the County of Hanover, and a Number of his deluded Followers." Issued in Williamsburg on Saturday, May 6, 1775, Dunmore's proclamation called on Virginians to "vindicate the constitutional Authority of Government." Five weeks later, on June 8, Dunmore himself took refuge aboard the warship H.M.S. Fowey anchored off Yorktown. Royal government in Virginia was over.

Twelve months after Lord Dunmore fled the Palace in Williamsburg, the Fifth Virginia Convention on June 29, 1776 elected Patrick Henry as the first governor of the independent Commonwealth of Virginia. Virginia's new state constitution and its Declaration of Rights comprised an eloquent vindication of constitutional government & but not quite what a certain John Murray and his deluded followers had expected.