The American Almanac and the Astrology Factor

by Keith A. Cerniglia NINETEENTH CENTURY LITERARY HISTORIAN Moses Coit Tyler, in his 1881 survey A History of American Literature, assigned the almanac to polar ends of the early American mind. Having long suffered literary scorn, the almanac was, in Tyler's appraisal, the "most despised, most prolific, most indispensable of books, which every man uses, and no man praises." It was, Tyler continued, "… the very quack, clown, pack-horse, and pariah" of American literature, but also "the supreme and only literary necessity -- preferable even to the Bible or daily newspaper.1 While Tyler hinted at a kind of perpetuating legacy of almanacs ("the one universal book of modern literature"), scholars such as Bernard Capp and Herbert Leventhal buried the persuasive almanac beside the persuasive astrological chart sometime prior to the dawn of the eighteenth century.2 That said, the preponderance of almanacs in the eighteenth century -- when Boston supplanted Cambridge as handmaiden to the American almanac by way of establishing independent printing presses -- suggests that no successful effort was made to eliminate them. 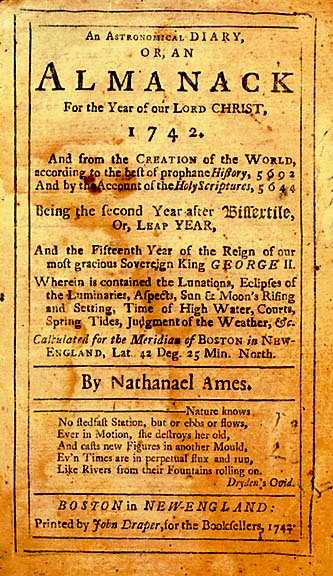 It has been argued that astrology and almanacs enjoyed a symbiotic relationship in which each was fitted to serve utilitarian necessity.3 The relationship appears to have been pronounced in Europe, where almanacs emerged as a reflection of the beliefs and methodologies of the early modern period. American almanacs, on the other hand, largely have been cast as weak imitations of their European progenitors and as not playing a great role in contouring religious, social and intellectual lines. Capp, whose comprehensive study of European almanacs spans three centuries, concedes that the rise of the American almanac ran concurrent with the decay of astrology. The American almanac thus, Capp asserts, "naturally evolved in a different direction."4 One question that requires our attention is this: Why shouldn't the American almanac in the seventeenth and eighteenth centuries have opted to take a direction different from that of its English, French or Hanoverian forbears? Could that direction, moreover, been developed more consciously and actively rather than 'naturally' and passively? Lastly, what effect did the American almanac have on the colonial mind? The purpose of this undertaking is to trace a clear expansion of thought that did not necessarily run counter to popular religion but instead offered alternatives to the ways early Americans perceived their world. The American almanac, of European antecedence but differing in function, shall be used as a determining factor that elicited awareness of the emerging study of astrology. The science of astrology, which almanacs granted mass exposure that cut a swath across class and culture lines in early America, helped signal the encroachment of an increasingly secular world.

"A BRIEFE HISTORY OF ALMANACKS" IN WORLDS OLD AND NEW How are the mighty fallen! It was not always thus. Far away in the dim vista of the past this humble vehicle of general knowledge was an honored guest at every fireside; the chimney corner was its throne and its well-thumbed leaves gave evidence of the estimation in which it was held. -- Samuel Briggs on almanacs, 1891 5

THE HISTORY OF WRITTEN ALMANACS has been traced to the second century of the common era, when Greeks from Alexandria began recording observations in organized form. The first printed almanac dates to 1457 (printed by Gutenberg in Mentz). In 1660s London, sales averaged about 400,000 copies annually.6 As Capp suggests, the almanac's value to Elizabethan and Stuart England was not rooted in any lofty literary quality. The almanac found its way into the hands of the public, discerning and otherwise, because it covered a range of material "cheaply and concisely."7 This was a carryover of the English almanac in America, as well. The high-water mark of English almanacs has been recognized as the years between 1640 and 1700, when the genre diversified by exploring sociopolitical and religious issues.8 During the Elizabethan period, the English almanac began to assume the format we are familiar with today. A principal section included a calendar and was lavishly illustrated with planetary movements. Integral to the English almanac was the 'Zodiac Man,' a figure that depicted various parts of the body as correspondent to astrological readings. Finally, the prognostications (or "predictions") index covered four quarters of a calendar year with weather reports, medical notes and farming information accordingly assigned to that particular portion of the year. These were standard features of the English almanac, though some were refined and modified over time.9 Capp and other scholars indicate that almanac-makers soon opted for regionalization, which allowed the authors to address the specific needs and interests of their communities. Many almanacs proved they were not too exalted for dull or uninspiring doggerel verse, even if the poetry appertained to medical advice.10 Likewise, some almanacs demonstrated sensationalism was not beneath their authors. Far-fetched prophesies, baseless political speculation and acidic social commentary could be found even in the most profitable publications. By the end of the Stuart period, English almanac-makers distressed over how to reach the wide and divergent tastes of the London class system, while at the same time, remain committed to work of a higher quality. Also, the almanac author had a vague notion at best of what the public desired most. "Almanacs sought to fill many roles," Capp writes, "and it is difficult to determine which section the buyer felt to be most important."11 Of the extant English almanacs from the Elizabethan and Stuart periods, the majority was property of landed gentry or professional tradesmen, though it is clear their readership was exclusive of class or trade.12 The American almanac indeed evolved along different lines and flourished under ideal circumstances. No newspaper existed in the colonies before 1704 (the Boston News-Letter) and no magazine before 1740 (Andrew Bradford's The American Magazine). The first colonial almanac can be traced to 1639, when a publication called the Almanack Calculated for New England, by Mr. [William] Pierce, Mariner was printed on the Harvard University Press, then just a year old. Printed in 16-page book form, these early almanacs included a title page, information on eclipses, the annual calendar and notes on the courts.13 Prominent to the early American almanac was a riff from the European 'Zodiac Man.' Even readers with only crude literacy skills could use the 'Zodiac Man' to connect parts of the body with signs of the horoscope or prescribe cures for nagging diseases.14 In American almanacs, this feature went by a variety of names, including homo signorum, the Man of Signs, moon's man, the "naked man" or "anatomy." Whereas the European almanac experimented with modifications over the course of its long and illustrated history, the American version adhered to established conventions. "Any later departure from established formal would risk the loss of readers… who expected to find certain items in certain places," researcher Marion Stowell suggests.15 It was not the format, though, which made the colonial almanac the most successful vehicle of the secular literary tradition in the New World. Seventeenth century colonial almanacs found an immediate audience. The Cambridge (Massachusetts) printing press produced 157 books between 1639 -- the birth year of the American almanac -- and 1670. In this span of four decades, almanacs were exceeded in publication only by religious books, tracts and sermons.16 This is remarkable when considering the vitality of religion in early America. In terms of numbers alone, almanacs were published in far greater quantity than all other books combined in the seventeenth and eighteenth centuries.17 How many almanacs were in print in this span of 170 years? Charles Evans' American Bibliography, a 12-volume work that took him 31 years to complete, lists more than 1,100 different almanacs published between 1639 and 1799. 18 Historically, the American almanac, while clearly English in origin, occupies a unique place in the story of our literary culture. It has been dismissed as derivative, ordinary and even plagiaristic, but the almanac has played a great role in broadening the scope of American social and intellectual horizons. It will be argued in succeeding pages that the American almanac, which reached the hands of colonial Americans in greater number than any religious book, made inroads into a growing secular society through the selected so-called "occult sciences" of astrology.

"WHEREIN IS CONTAINED ACCOUNTS OF ASTROLOGYE:" COPERNICAN SCIENCE CROSSES THE ATLANTIC Some Degree of Superstition, mixed with and overbalanced by the Light and Influence of Religion, leads Men on to a greater Degree of Goodness; so in Astrology, the Superstition of which in Politicks, with good Sense and Learning, and the Use of all Lawful means, may lead Men on to Greatness.

Strange Things this Year will come to pass, I'm told by some Ass-trological Glass, The Birds will sing, and Sheep will bleat, And hungry Folks will want to eat.

Billy and Dicky, Peggy and Molly must see the Man on the Moon; and when the little child cries, the great one runs for the Almanack, to bless the House with Peace.

Astrology has a Philosophical Foundation: the celestial Powers that can and do agitate and move the whole Ocean, have also Force and Ability to change and alter the Fluids and Solids of the humane Body, and that which can alter and change the fluids and Solids of the Body, must also greatly affect and influence the Mind; and that which can and does affect the Mind, has a great Share and Influence in the Actions of Men.35