Declaring Independence: The Inside Story

By Matthew Brent Pandel No single act in world history had the miraculous impact of the American Revolution. Although only directly pertaining to two political bodies, the empire of Great Britain and the British American Colonies, the chain of events that the American Revolution sparked changed the world forever. Never before had a large communion of dependent colonies of a foreign power, come together to achieve the seemingly impossible dream of unified independence. Through extensive deliberation and debate, 53 men came to the conclusion that American Independence from Great Britain was no longer a want; but was now a necessity. It is these 53 men, all having different feelings, opinions, and convictions, which forged the first successful separation of a child nation from that of its mother. Although alliances and anti-alliances formed along the way, these men accomplished what was thought to be impossible. The diversity among the delegates to the Second Continental Congress directly affected the method in which dependent ties with the empire of Great Britain were handled. Students of American history today are more or less given the impression that all of the inhabitants of the American Colonies wanted their independence from Great Britain. However, this is most definitely not the case. "When the Second Continental Congress convened in May 1775 few delegates supported complete independence from Great Britain." (Hamowy 264). Admittedly, men such as John Adams and Benjamin Franklin had already decided independence was the only solution to this conflict.

Many such as John Dickinson, secondary delegate from Pennsylvania, felt quite differently. In his book, The Radicalism of the American Revolution, Gordon Wood, Ph.D., points out an often remembered and misquoted line spoken by Dickinson, "Where is [our] maternal affection?" (165). Dickinson spoke this only six hours before the Declaration of Independence was first signed. Therefore, even until (and after) the very end, Dickinson felt American Independence from Great Britain was "treasonous action of the most despicable kind." (Dickinson 230). Earlier in the debate over independence, Dickinson was not alone in his views. 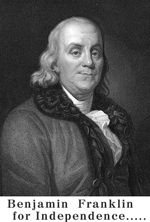 The portly and often disliked delegate from Maryland, Samuel Chase, believed very much along the same lines as John Dickinson, only with a slight twist. Chase saw nothing treasonous about one nation wanting independence from another. To Chase, the reason why not to declare independence was due to a fear that the backwater, ill-prepared Colonial Army, under the direction of George Washington, had little or no chance against the highly trained forces of Great Britain. In his historical musical, 1776, director Peter Hunt points out a speech that Chase gave before the congress in which he states, "Maryland would welcome Independence if it were given, but is highly skeptical that it can be taken." (Hunt). Chase continued to hold this view until he and the rest of the War Committee took a trip to New Brunswick to witness the training progress of the Colonial Army. It was upon their return from this inspection that Chase changed his view entirely and mentioned that although the men could not drill together, they could most definitely shoot together (Hunt). Personal feeling alone was not the only reason for a delegate's particular view of independence. In the United States today, the media provides the ordinary citizen with information concerning conflicts in far off lands. Due to the poor speed with which news traveled, this was not the case in 1776. For this reason, one's view was not decided by knowledge of the entire world. More so, the decision would be based on the circumstances of one's particular region. This is the explanation why in Massachusetts, "On 16 December 1773, a group of Bostonians, disguised as Indians, boarded three vessels and threw the cargo of tea into the harbor." (Hamowy 198). The Bostonians did this action out of protest to the tyranny that they felt the government of Great Britain was subjecting them to.

Other colonies did not hold this same view. The colony of South Carolina held a rather different view of the British Government. Although they felt sympathy for Massachusetts, they personally had not experienced such "tyranny." It is for this reason that South Carolina remained neutral on the issue of Independence until late in the debates. Of course, states like Maryland held the opinion that independence was their right; however, achieving it by force was suicidal. (Morison 108). If this disagreement between colonies wasn't bad enough, conflict arose within the colonies themselves. When colonial legislatures met to decide on their three voting delegates, many things were brought into consideration. Oddly enough diversity among the delegates was a must in the eyes of the Delaware Assembly. For this reason, Delaware chose an experienced diplomat and supporter of independence, Caesar Rodney, a wealthy loyalist attorney, George Read, and the retired pro-independence colonel, Thomas McKean. Dr. Hoffecker's descriptions only show how easy it would be for conflict to arise. Luckily for the supporters of independence, Delaware had the necessary majority of 2-1 in favor of independence. Of course, that is with all three men present. Unfortunately, Caesar Rodney, plagued with cancer for the later portion of his life, was so gravely ill that he returned to Delaware due to poor health and to put down a Tory uprising in the lowest of Delaware's counties, Sussex. When Congressional President John Hancock ruled in favor of a motion by John Dickinson that all colonies must be unanimous in its vote for Independence, Thomas McKean, realizing that Delaware would have to abstain due to a tie between his vote for independence and Read's vote against, went to Delaware to retrieve Rodney. Although Rodney barely survived the trip, his "yea" vote saved the Delaware Delegation, and in the long run, saved the Independence movement.

One of the problems that arose for another colony was that of a lack of instructions from the home legislature. Although New York sent four delegates to the 2nd Continental Congress, only one, Mr. Lewis Morris, ever spoke, and this was only when voting. One would expect then, that Morris would be saying "yea" or "nay" in favor or not in favor of particular issues. However, the colony of New York never voted on the issue of independence, or any other issue, for that matter. The reason for this: the state of New York never sent its delegation "explicit instructions on anything" (Hunt). Without any instructions, Morris was forced to abstain from voting. This was not an uncommon practice. However, New York was the only colony to abstain every time a vote was called. In fact, after abstaining from voting for the 29th time, President of the Continental Congress John Hancock became so enraged bystanders were concerned he was having a stroke. Nonetheless, New York's constant abstentions contributed to the development of the United States of America. 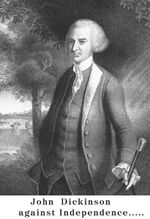 A one-voiced, one sided delegation was not at all the problem of Pennsylvania. As the Second Continental Congress met in Philadelphia, the Pennsylvania Legislature considered it their personal responsibility to send the most diverse delegates possible, so that all aspects of discussion would have a Pennsylvanian on its side. (Stokesbury). For the position of chief representative, they chose, author, diplomat, statesman, inventor, and scholar, Dr. Benjamin Franklin. They felt with his experience as a diplomat during earlier entanglements between Britain and France, Franklin was the logical choice. As Franklin's chief opposition, the legislature sent farmer and businessman, John Dickinson. To be expected, Franklin joined forces with men such as John Adams, and Dickinson merged with no one; being the main representative of anti-independence under any circumstances. While Dickinson spoke frequently and lengthily on the reasons why not to strive for independence, Adams would start to yawn or, more often, get up and leave the second Dickinson began to speak. With Dickinson and Adams always at each other's throats, it was the alliance between Dickinson and the third delegate from Pennsylvania, which decided the colony's vote.

For its third delegate to the Second Continental Congress, Pennsylvania chose Judge James Wilson. A naturally worried man, who often felt uncomfortable around people, Wilson found safety in the policies of John Dickinson. Although he himself had no direct opinion of independence from Britain, he knew all too well as a man of the law, what the punishment would be if the quest for independence failed. For this reason, modern historians regard Wilson as a moderate even though he eventually became a conservative. During the majority of his seating with the congress (and subsequently his moderate period), Wilson voted time and again with Dickinson. It has even been said that Wilson's appearance wasn't even necessary for the reason that all knew how he would vote on an issue merely by asking how Dickinson would vote. It was not until the final vote was called on the question of independence that Wilson finally strayed from Dickinson. In his film, 1776, Peter Hunt recreates a dialogue between Dr. Benjamin Franklin, John Dickinson, John Adams and Judge James Wilson: Secretary: Judge Wilson? [calling for Wilson's vote] Through historical study on this subject in particular, one finds that many feel it was Wilson's fear of being "remembered" that led to his decision to side with the majority rather than Dickinson. This, more than any other incident, saved American Independence. On July 4, 1776, the Second Continental Congress, after months of debate and revisions, adopted Virginia Delegate Thomas Jefferson's Declaration. Within two years, all 53 men in the room had signed but one, John Dickinson. The task these men had set before them was dangerous and unfair. These 53 men felt that their families, friends and fellow American Colonists were worth these risks. Although each man came from a different background, different regional location and had different beliefs, they came together to achieve a better life for Americans. For as Dr. Benjamin Franklin put it best, "We are men: no more, no less." Works Cited Hamowy, Ronald. "The Declaration of Independence." The Blackwell Encyclopedia of the American Revolution. eds. Jack P. Greene and J.R. Pole. 1991. Morison, Samuel Eliot. The Oxford History of the American People. New York: Oxford University Press, 1965. 1776. Dir. Peter H. Hunt. Playwright. Peter Stone. William Daniels. Columbia Tristar, 1972. Stokesbury, James L. A Short History of the American Revolution. New York: William Morrow and Company, Inc., 1991. Wood, Gordon, Ph.D. The Radicalism of the American Revolution.
Popular Cities
Nashville Tutoring Raleigh-Durham Tutoring St. Louis Tutoring Sacramento Tutoring Tucson Tutoring Phoenix Tutoring Columbus Tutoring Virginia Beach Tutoring Denver Tutoring Madison Tutoring
Popular Subjects
Quantum Chemistry Tutors A Level Biology Tutors Neural Engineering Tutors IB Philosophy Tutors LSAT Tutors TASC Social Studies Tutors Comparative Religion Tutors Systems Programming Tutors Spanish Tutors Balinese Tutors Computational Finance Tutors GRE Subject Test in Psychology Tutors GCSE Statistics Tutors Italian Renaissance Tutors AP Chemistry Tutors ARDMS - American Registry for Diagnostic Medical Sonography Tutors Burmese Tutors CPPA - Certified Professional Public Adjuster Tutors IB History Tutors Foreign Language Tutors
Popular Test Prep
GMAT Test Prep LSAT Test Prep SAT Courses & Classes ISEE Test Prep CPPA - Certified Professional Public Adjuster Test Prep PRAXIS Courses & Classes Spanish Courses & Classes CPA Courses & Classes SSAT Courses & Classes ACT Test Prep