'The Review' - Authors of the Past

In publishing a journal such as 'The Review,' one precept stands paramount: Thou Shalt Not Bore Thy Reader. We have tried to remain faithful to this worthy principle in our previous editions...and hope you will agree that we have not veered from the 'straight and narrow' in our Spring issue. Always, we strive to offer you something old and something new. In the process we hope to illumine a corner of the 'old' that might otherwise remain in the shadows...and present that which is 'new' to add to your database of knowledge.

A fascinating frontier figure-- Lewis Wetzel-- appears in a biographical sketch written by James Pierce. In his article Mr. Pierce offers us an intensive look at the dark side of the frontier fighter. This is not the sugar-coated version of the frontier American served up by numerous MGM films of yore. Instead, we get a realistic picture of a man of action, an Ohio Valley frontiersman and Indian hunter of the late 1700's. Mr. Pierce offers us a politically incorrect dissection of Indian hunter Wetzel, warts and all. Describing the early frontier people, author Pierce-- an instructor at Skagit Valley Community College in Mt. Vernon, Washington-- notes that "they were half 'Indianized;' the Indians they made war on were half 'Europeanized.' In truth, the frontier people's basic philosophy was much closer to that of their Indian adversaries than it was to their fellow whites living on the other side of the mountains. It was a fascinating time populated with some amazing people." Early America's other great conflict-- the French and Indian War-- is the subject of Professor David Copeland's article in this edition.

Specifically, he deals with the manner in which newspapers covered the major events of that war: the initial clashes of the two nations, Washington's journal and defeat at Fort Necessity, the Albany Congress, losses in New York and Pennsylvania, and the strategy for and capture of Canada from Louisbourg to Quebec and Montreal. Prof. Copeland's research examines approximately 2500 issues of newspapers from Boston, New York, Philadelphia, Annapolis and Charleston. His article details the role newspapers of the day played in covering what was the single greatest story of interest for the better part of a decade. Prof. Copeland is assistant professor of mass communication at Emory and Henry College in Emory, Virginia. He is author of the recently-released "Colonial American Newspapers: Character and Content" from the University of Delaware Press, and has written articles on colonial journalism, religion and media. In addition, his research has earned numerous awards from the American Journalism Historians Association, and the Association for Education in Journalism and Mass Communication.   Question: Can an attorney in England, an admitted failure as a lawyer, living thousands of miles away from America, profoundly influence and shape the attitudes of the laws and leaders of the early Republic? 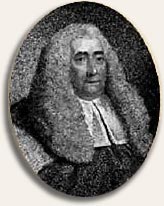 Attorney R. Greg Bailey's answer is a resounding "Yes" in his discerning account of William Blackstone and the pervasive influence his Commentaries had on the principal architects of the early Republic. Writing with singular precision in his article "Blackstone In America," Bailey offers us more than enough points and authorities to establish Blackstone's contributions to such milestones as the Declaration of Independence, the Constitution and the Federalist Papers. Bailey traces lawyer Blackstone from his opening lecture....to the publication of his Commentaries.... and his new-found career as a scholar, jurist and politician. Author Bailey's well-documented piece provides readers of The Review with new insights into and a greater appreciation for the revolutionary goings-on in America...and how one man...far removed from the scene...helped make The Great Experiment possible. A practicing attorney in St. Louis, Missouri, Mr. Bailey is a correspondent for The Economist magazine and a freelance producer for ABC News. His publication credits include the St. Louis Post-Dispatch, Maclean's, Barrons's, National Law Journal, Toronto Star and the Chicago Sun Times. Among his teaching assignments, Mr. Bailey taught a graduate course in international law as an adjunct professor at Webster University, St. Louis, as well as classes in political science as adjunct professor at East Central College, Union, Missouri.

Professor Tom Jewett revisits our pages with his informative treatise entitled "Three Presidents and A University." Explaining how three presidents established the University of Virginia," Prof. Jewett points out that if Thomas Jefferson is the Father of the University of Virginia, then Presidents Madison and Monroe are its two god-fathers. We weren't aware of this tripartite involvement in that institution's founding, so we read it with great interest. We trust you will find it equally so. An assistant professor at Southern Illinois University at Edwardsville, Prof. Jewett is the author of more than 50 articles, and has written five books on history and education.   Beginning with the Revolutionary War and continuing into his presidency, George Washington was sought after by all of the leading artists of the day. They all put brush to canvas to capture his likeness. While artists depicted Washington in a variety of historic scenes and settings, the portrait nonetheless was the established and most popular format in the 1700's. Because of his almost celebrity-like status in early America, it is not an exaggeration to say that Washington's portrait was in great demand.

The Real Face of George Washington

Gilbert Stuart, whose portrait of Washington has come to be regarded as definitive, purposefully allowed his life study of Washington to remain unfinished in his studio, as it served as the basis for numerous copies. Stuart privately referred to it as his "one hundred dollar bills." While a survey of a dozen or more paintings of Washington shows certain features common to all, exactly how real and true-to-life are the paintings? Where does reality begin and artistic expression end? For the answer we must turn to Jean Antoine Houdon, the French sculptor. Houdon took a life mask of Washington in 1785 when Washington was fifty-three. What is revealed is the real George Washington as he actually appeared-- in the flesh, so to speak-- sans artist's embellishments and heroic poses. It's yours to behold in The Real Face of George Washington.   Readers of the Review are again the recipient of another of Professor James Henretta's analytic biographies. This time we're pleased to offer "Richard Allen and African-American Identity," a highly-readable narrative of the founder of the African Methodist Episcopal Church and its first bishop. More than a classic American success story, Richard Allen's transformation from slave to free man is really about forging an identity for his people and himself. James Henretta is Priscilla Alden Burke Professor of American History at the University of Maryland at College Park. He received his Ph.D. at Harvard University, and has taught at the University of Sussex, England; Princeton University; UCLA and Boston University. He is the author of numerous publications including "Evolution and Revolution: American Society, 1600-1820.   The pages of early America are filled with the sounds of war and the cries of battle. The War of Independence itself is a seemingly-endless procession of military engagements, both major and minor. We read of the body counts on both sides. The number and placement of cannons. Strategic positions taken and muskets at the ready.