Take Your Mark, Get Set, Good-bye! The Period Between Yorktown and Evacuation Day, 1783

« Continued from previous page So much of the war just ending had taken place in New York State and also during the war Washington was weaned upon, the French and Indian War. General Washington was afforded a rare opportunity to visit these historic sites in style. July 18th, Washington began his "tour to the northward" crossing the Hudson at Kinder Hook. Accompanying the General was the Governor of New York George Clinton and some officers. At Albany they were joined by General Philip Schuyler who accompanied the general to his brother, Harmanus' home in Stillwater, NY. Philip had appointed Harmanus assistant deputy quartermaster-general. Stories of the town were probably told to Washington about the tradition that Indians crossed here, the expeditionary forces in 1690, 1691, and 1709 met here then and during the French and Indian Wars. Certainly the immigration story years ago of the New England settlers coming "westward" down this main street of Hudson Avenue, was a vital story for Washington to learn about. Current events were mentioned too. He saw where then Colonel Henry Knox and his men brought the cannons from Ticonderoga to Cambridge, Massachusetts early in the war and how the militia under the command of General Gates led to the surprising victory over the British in these "Stillwater's Hills" known as the Battles of Saratoga, and of Bemis Heights where members of the 13th Albany Militia Regiment helped defeat the British in October 1777. Heading north, the General stopped at Fort Edward. This was the point on the Hudson River with rapids and falls, and ended water travel westward. Canoes would have to be carried overland from here to the headwaters of Lake Champlain. Sir William Johnson changed the name of the fort from Fort Lyman to Fort Edward in 1755. It was named in honor of Edward, the Duke of York and Albany, the brother of King George III. At this time a large military hospital complex was constructed on the island, presently known as Rogers Island. Before the Revolutionary War, the fortifications were dismantled. With the fortifications in ruins, Fort Edward was defenseless. If there were a site where the favorable outcome of the American Revolution was foreseen, this area would play the title role. In 1777, the tragic murder of Jane McCrea took place here and many of the area's settlers finally took up arms against the British and helped to cause Burgoyne's defeat at Saratoga. The British defeat also sparked thinking in the French Court that maybe, just maybe, these rude colonists had a chance to win their independence. The backing of the American cause in the French court began here. Nearby, at the Battle of Freeman's Farm, on the Saratoga battlefield today is a monument to the wounded leg of the heroic General Benedict Arnold. Many historians feel that the "seeds of treason" were planted in Arnold's breast while he recuperated from this wound. 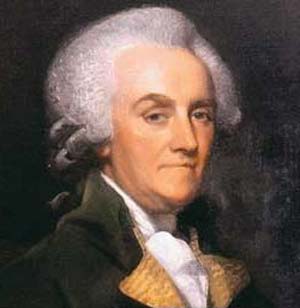 The Army again was using the "threat" card of a coup over the lack of pay. Congress had fled Philadelphia to Princeton, New Jersey because of the appearance and threat of 300 Pennsylvania soldiers clamoring for their back pay. Washington responded. When he arrived and tried to get lodgings in Princeton, he ran into unforeseen difficulties. The owners of many of the best homes in Princeton would only agree to rent to Washington for a full year. The only suitable home sat four miles away in Rocky Hill, N.J. and belonged to the widow of John Berrien. Mrs. Margaret Berrien agreed to rent Rockingham to the General, and his entourage, on a monthly basis. On August 23rd of 1783, General Washington—accompanied by his wife, a small guard of 12 to 24 men, and servants—took up residence. 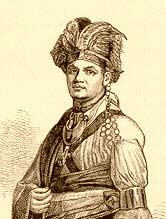 The General would ultimately stay there for almost three months, August into November. Martha Washington accompanied her husband and remained here until October when she left for Mount Vernon "before the weather and roads should get bad." In October, Congress concluded its business. News of the signing of the Peace Treaty in Paris arrived. Washington prepared his Farewell Address to the Armies of the United States, and legend says he read it to his attending soldiers at Rockingham. It was published in the Philadelphia papers on the 2nd of November. General Knox would get to read the letter to the Newburgh troops. Life was relaxing here. Rockingham's had varied orchards and spacious grounds and Washington entertained frequently. Along with individual visitors including dignitaries Jefferson, Madison and Paine, he hosted at least one party with over two hundred guests. 16 On September 5th, 1783, Lieutenant Bezaleel Howe replaced Captain William Colfax who was in charge of the Commander in Chief's Guard. The rest of the members of the Guard were discharged. To replace them, a group of soldiers from the New Hampshire Continental Line was assigned. The following month, on October 10th, 1783, Bezaleel was promoted to Captain. He was placed in command of the newly organized detachment of the Guards that was to escort General Washington's baggage and records to Mount Vernon - an important event inasmuch as it was the final mission of the Commander-in-Chief Guards and was another signal that the eight years of war was really at an end. Captain Howe selected twelve guardsmen to accomplish this task, the last mission of the Guard. These guardsmen were: 1st Sergeant Nehemiah Stratton, 1st Corporal Asa Reddington; Corporal Joel Holt, who served as wagon master, Privates: Stephen Ames, William Batchelder, James Blair, Ebenezer Coston, Abraham Currier, William Ferguson, David Morrison, Benjamin Pierce and Luther Smith. Howe and his detachment left Rocky Hill, New Jersey the next day, Monday. They arrived in Philadelphia on Tuesday Evening of November 11th. The next day they left Philadelphia for Mount Vernon. They passed through Chester, Wilmington, Baltimore, Bladensburg, Georgetown and Alexandria and then Mount Vernon. According to Corporal Asa Redington, the detachment of Guards marched back to West Point, New York, a distance of 295 miles. Upon their return they crossed the Hudson River to Constitution Island where they were honorably discharged from the Continental Army on December 20th, 1783. 17 Washington wrote to Sir Guy Carleton on November 6th to ask again "... that you will be so obliging as to inform me of the particular time, or even the certain day, if possible when this event will happen." On November 10th, General Washington left Rocky Hill for West Point. Brigadier General Huntington, commanding at West Point, on April 16th had written General Washington and pointed out the importance of having a strong base remaining at West Point. The following day, in a confidential letter, Gov. Clinton from Poughkeepsie echoed Huntington's note and added that it might not be a bad idea to have - in each state - a training ground for young soldiers. 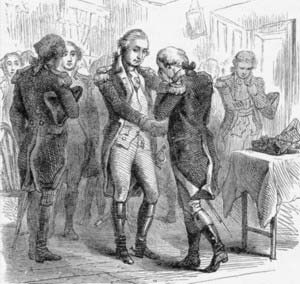