A Connecticut delegate to the Constitutional Convention of 1787, Oliver Ellsworth brought with him a piety rooted in the severe moral theology of New Light Calvinism. History does not satisfactorily explain what attracted Ellsworth to the New Light movement, it only offers hints on how his, and others’, simple lives, lack of social connection, and perhaps Yale educations made them receptive to the harsh moral theology of the New Light. What history does adequately explain though was that Oliver Ellsworth believed he was a righteous ruler who used his political training and office to work for the common good. 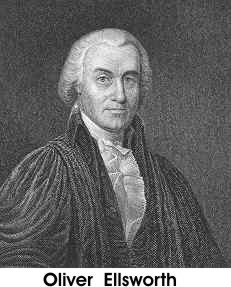 For clerical patriots, genuine religion necessarily involved social morality. When social and moral questions implied political outcomes, preachers engaged in political debate as a matter of religious concern the Edwardseans took republican political sentiments to be particular applications of higher moral principles. Republicanism, hence civil rebellion, appealed to them because they were convinced that the moral law lay embedded in the will of God. 24

Such instruction would, when coupled with his study of the emerging "Moral Sense" philosophical movement, lead Bellamy to develop his own New Light theology of political office. In Bellamy's theology the politician would become the righteous ruler of society. c. New Light Faith, Public Office, and Compromise To develop upon the theology of political office, Bellamy turned towards the Moral Sense school of ethics that enjoyed increasing popularity amongst British moral philosophers and ethicists during the middle of the 18th century. The school rebelled against the abstracted morality of Locke and the self-interest ethics of Hobbes in favor of an ethic of benevolent self-subjugation ordered towards the welfare of others.25 Benevolence, the highest virtue, required policies that upheld the rights and preserved the happiness of the most people. Those in the political sphere suffered an obligation to work for benevolent policies that conferred the greatest possible benefit upon the whole; Moral Sense subjugated the good of individual constituencies to the common good. Francis Hutcheson, one of the Moral Sense school's eminent thinkers and the primary source of Moral Sense ethics for Bellamy,26 developed an empiricist ethic that rejected the Age of Reason's rationalism.27 Moral distinctions, knowledge of right and wrong, did not flow from a deductive schema; rather moral sensibilities occurred to a "sense" of the human being, who apprehended right and wrong through observations of persons and their actions.28 This simple empiricism made the philosophical substance of the movement, particularly its teachings on benevolent governance, easily accessible to the New Light politician. Embracing a notion of the common good, Hutcheson spoke of virtuous human activity as that which rejected self-gratification in favor mankind's collective good:

All Virtue is allow'd to consist in Affections of Love toward the Deity and our Fellow Creatures, and in Actions suitable to these Affections. Hence we conclude 1st, That whatever Scheme of Principles shall be most effectual to excite these Affections, the same must be the truest Foundation of all Virtue: And, 2dly, Whatever Rules of Conduct shall lead us into a Course of Actions acceptable to the Deity, and most beneficial to Mankind, they must be the true Precepts of Morality.29

But in the present case, men who have lucrative and influential state offices, if they act from principles of self-interest, will be tempted to oppose an alteration, which would doubtless be beneficial to the people. Believe not those who insinuate that this is a scheme of great men to grasp more power. The temptation is on the other side. Those in great offices never wish to hazard their place by such a change.63

Faced with the inability of depraved men to constitute a government ordered towards the common good, Ellsworth believed that only rulers who understood the awesome weight of making satisfaction before God on the duty to love one's neighbor as oneself could create good government.64 The duty required a professional as well as personal commitment to love of neighbor; God charged the righteous ruler to provide "good laws – in distributing impartial justice to the rich and poor – in protecting all in their rights and guarding the common interest and safety."65 Addressing himself "To the Rhode Island Friends of Paper Money, Tender Acts and Anti-Federalism," Ellsworth wrote of the righteous ruler's desire for justice and the need for virtue in public office:

Experiments in public credit, though ruinous to thousands, and a disregard to the promises of government had been pardoned in the moment of extreme necessity, and many honest men did not realize that a repetition of them in an hour less critical would shake the existence of society. Men full of evil and desperate fortune were ready to propose every method of public fraud. But your system we see unrighteousness in the essence, in effects, and in its native miseries. There are among you legislators eminent, through the union for their wisdom and integrity. Penetrated with grief and astonishment they stand in silence, waiting for the return of your reason.66

Continue on next page