A Hand-Written Receipt for Nine Guns and Nine Bayonets

Signed by a Continental Army Officer

The receipt, with the text in an unknown hand, is signed by Army Captain Joseph Churchill in Middletown, Conn. on July 5, 1776. The receipt is for "Nine Guns & Nine Bayonets & belts" for use by his soldiers.This is a rare historic artifact from early America, a handwritten receipt for arms signed by a Continental Army officer on July 5, 1776, the day after the Declaration of Independence was approved and officially adopted by the Continental Congress.

The weapons involved in this transaction are to be used by Capt. Churchill's soldiers as they march from Connecticut to New York to join Washington's army in the fighting in New York.

The arms are being received from Titus Hosmer, a lawyer from Middletown and Justice of the Peace at the time of this transaction. Two years later Hosmer went on to become a member of the Continental Congress and one of the signers of the Articles of Confederation. Later he was elected to the Maritime Court of Appeals in 1780.

The entire receipt including the signature itself is written in brown ink on light-brown paper, measuring approximately 7 1/2" by 6". The back of the document is also signed by Capt. Churchill and dated. 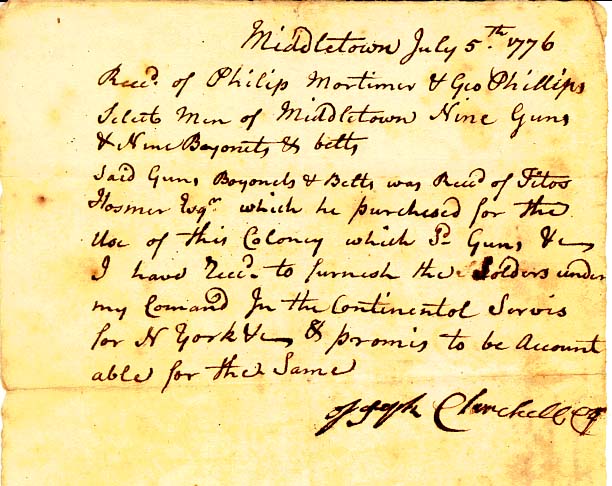 A Hand-Written Receipt for Nine Guns and Nine Bayonets

Here is the complete text of this manuscript receipt dated "Middletown July 5th 1776."

Recd of Philip Mortimer & Geo Phillips Select Men of Middletown Nine Guns & Nine Bayonets & belts. Said Guns Bayonets & Belts was recd of Titos Hosmer Esq. which he purchased for the Use of this Colony which sd. Guns &c I have recd to furnish the Soldiers under my Comand In the Continental Servis for N. York &c & promis to be Accountable for the Same.