Born in Senegal, Africa in 1753, she was kidnapped on a slave ship to Boston and sold at the age of seven to John and Susannah Wheatley of Boston as Mrs. Wheatley's personal servant. Phillis, however, was soon accepted as a member of the family, and was raised and educated with the Wheatley's other two children.

Phillis became a Boston sensation after she wrote a poem on the death of the evangelical preacher George Whitefield in 1770. Three years later thirty-nine of her poems were published in London as "Poems on Various Subjects, Religious and Moral." It was the first book published by a black American.Phillis soon displayed her remarkable talents by learning to read and write English. At the age of twelve she was reading the Greek and Latin classics, and passages from the Bible. At thirteen she wrote her first poem.

In 1775 she wrote a poem extolling the accomplishments of George Washington and sent it to the commander-in-chief. Washington responded by praising her talents and inviting her to his headquarters. 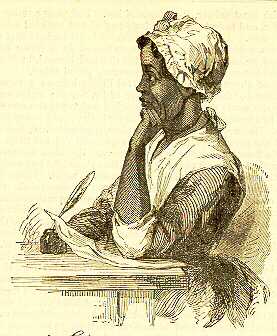 After both of her benefactors died, Phillis was freed as a slave. She married Dr. John Peters in 1778, moved away from Boston and had three children. After an unhappy marriage, she moved back to Boston, only to die in poverty alone in her apartment at the age of 30.

Most of Phillis Wheatley’s poems reflect her religious and classical New England upbringing. Writing in heroic couplets, many of her poems consist of elegies while others stress the theme of Christian salvation. 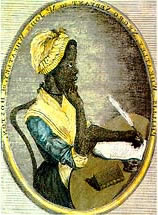