The Whiskey Rebellion: Taxing 'Sin' — Then and Now

"So? Who's in a hurry?" - Robert Benchley, when told that drinking and smoking are "slow poison."

On August 1, 1794, there occurred in this country the "Whiskey Rebellion," which offers a few lessons on taxation (especially of the "sin tax" variety), political deal making, George Washington and the advancement of civilization. 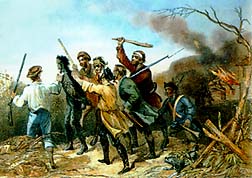 A tax collector is tarred and feathered during the Whiskey Rebellion in 1794.

The chain of events that led to the Whiskey Rebellion began when Alexander Hamilton put together an agreement between the states and the federal government that said the feds would assume all the debts incurred by the states after the Revolutionary War. In return the states agreed that the nation's capital city would be moved south from Philadelphia to a piece of backwoods, mosquito-infested swampland located on the banks of the Potomac River between Virginia and Maryland. It is not true, as has been supposed, that the location was chosen because it was close to George Washington's home and therefore would make it easier for him to commute (there was no White House at the time). Actually, the location was chosen as a sop to the southern states that would only agree to Hamilton's deal if the capital was moved South (it was a prestige thing). But the city did later take Washington's name, going down in history as Washington, District of Columbia. In any event, having agreed to assume the debts of the states in order to facilitate this new city, Hamilton had to find a way to pay those debts. So he came up with the brilliant idea of imposing an excise tax on whiskey. Now — like all good taxes — a whiskey tax was bound to hurt some more than others, and in this case it was bound to hurt those in the west most of all (at this time the west — the "frontier" — was actually western Pennsylvania). Why? For one thing, these westerners, mostly farmers, were considered backward and a little slow-witted, so it was assumed that one could tax them with impunity. Besides, those uncouth westerners both drank and produced more whiskey than did the sophisticated easterners, whose tastes tended toward wine and port over the hard stuff. Whereas many westerners earned a living making whiskey, more easterners earned a living making politics (I leave it to you, gentle reader, to decide which poses more long-term health risks). So, the combination of a (perceived) lack of political clout on the part of the westerners, and the fact that easterners would pay proportionally less due to their drinking habits and livelihood, made a whiskey tax seem ideal — at least to the easterners. Not so to the westerners, who revolted against the tax. Their rebellion spread swiftly but they were no match for the power of George Washington. He may have been president at the time, but was not averse to donning his old military uniform and getting back into the fray (imagine today's presidents pulling the ol' uniform out of mothballs and deciding to lead the invasion of Panama, Iraq or Somalia). Washington, with Hamilton by his side, led an army of some 12,000 men into western Pennsylvania and easily put down the revolt. That was the end of the Whiskey Rebellion although, if memory serves, the excise tax was either repealed or (unlike the whiskey) diluted. As an aside, let me note some striking similarities between this whiskey tax and what is happening with cigarettes in the 1990s. As a reformed smoker who hasn't had a cigarette in 15 years, I bow to no one in my conviction that they cause myriad health problems. But let's face it, as we of the "educated class" became more aware of the harm cigarettes cause — and therefore reduced our use of the filthy weed — we also became more enamored of the idea that taxing the bejabbers out of tobacco was a great way to improve the country's health, reduce national medical costs and raise revenue. My point is this: In — say — the 1970s, when we too smoked a lot, the chances are a lot more remote that cigarettes would be taxed as heavily as they are today, or that anti-smoking fervor would sweep the country and become something of a cause celebre to our president (a closet cigar smoker). For their part today's smokers — as is normal in the '90s — are beginning to grumble loudly about society's and the government's attempts to demonize them, ostracize them and take away their "rights." Occasionally you see a letter-to-the editor, or some smoker waxing indignant on television about government "intrusion," and not long ago smokers even staged a "march on Washington." Along parallel lines, the tobacco companies have mounted legal counterattacks against the efforts of the media and the government to put them out of business or restrict their ability to grow their markets. Undaunted, as we have seen lately, the government has stepped up the pressure on tobacco companies as only it can. Call it progress. In 1794 we reached for our firearms and were ready to start shooting. Today we reach for our lawyers, our lobbyists, our PACs and our PR firms. And most of our shots are verbal. It goes to show (I think) how civilized we have all become.