Congress appointed a Committee of Five on June 11, 1776, to explain why the American colonies decided to become independent states and wanted separation from the British Empire. The Committee consisted of John Adams, Benjamin Franklin, Thomas Jefferson, Robert R. Livingston and Roger Sherman. 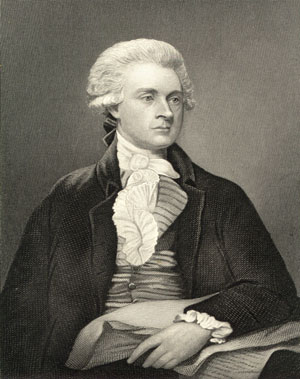 One might reasonably ask why the Committee asked Jefferson to write the first draft.

It was decided by the group that each member would vote their choice. Jefferson came in first and Adams second. Except for Livingston, Jefferson was the youngest of the members at thirty-three. At that point in his life his reputation did not match that of Franklin and Adams.

However, along with his record as a dedicated patriot, Jefferson brought to Philadelphia "a reputation for literature, science and a happy talent for composition.” In addition, his contemporaries had already noted his "peculiar felicity of expression."

In terms of writing style the formal writing of John Adams seemed ponderous. By contrast Jefferson's prose was graceful and elevated. Franklin, though a master at coining aphorisms, would likely have included a joke in the Declaration if he had authored it.

It should be noted that since the resolution of independence had been introduced in the name of Virginia, tradition called for a representative of that colony. Richard Henry Lee, a Patriot leader from Virginia, may have been a natural choice to draft the Declaration. But while Lee was an eloquent public speaker, Jefferson wielded an inspiring pen, and a mind to match. Also it was believed that Lee expected to return home to Virginia shortly. It seemed appropriate that Jefferson be chosen because he stood next to Lee in the Virginia delegation. 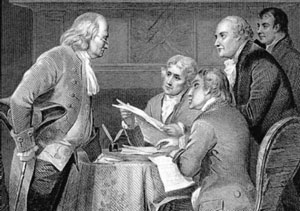 Adams, who came in second to draft the Declaration, presented Jefferson with reasons why the delegate from Monticello should draft the document:

“Reason first—You are a Virginian, and a Virginian ought to appear at the head of this business. Reason second—I am obnoxious, suspected and unpopular. You are very much otherwise. Reason third—You can write ten times better than I can.”

Because he specially valued their judgment, Jefferson submitted his draft to Adams and Franklin in advance of the others. Each of the two men suggested alterations in the document which was then submitted to the full Committee. Most historians believe that neither Sherman nor Livingston made any changes in the draft.

All told, in writing the document, Jefferson — together with his colleagues — made forty-seven alterations in the text, presenting it to Congress 17 days after the Committee had been named.