The American War of Lieutenant Colonel Archibald Campbell of Inverneill

By Robert A. McGeachy « Continued from previous age Admittedly, Judge Jones as a leading Loyalist cannot be described as a disinterested observer of the Revolution, but it should be borne in mind that he was often as critical of British military and political incompetence, as he was of Patriot treachery. Even allowing for some exaggeration in the Judge's account of Lee's captivity, many other contemporary accounts tend to support the view that Lee enjoyed considerable freedom and was not being oppressed. A report in the Scots Magazine (1777), for example, stated that: "All the accounts from New York agree, that Gen. Lee, though under confinement, is comfortably lodged, has proper attendants, and a plentiful table".46 Probably the most persuasive accounts concerning the true nature of General Lee's captivity can be found in Patriot sources. Washington, for example, was one of the first on the Patriot side to question whether or not Campbell of Inverneill's treatment was merited. In a letter to the Massachusetts Council of 28 February 1777, Washington referred to Campbell of Inverneill's confinement being "shocking to humanity" and at complete variance with Congress' resolution that Archibald Campbell and General Lee should receive the same treatment, particularly since as the latter was "only confined to a commodious House with genteel accommodations".47 This was one of the first reports to emerge which suggested that the details of Lee's confinement had been exaggerated, if not simply misrepresented. In a follow-up letter to Congress dated 1 March 1777, Washington expressed the view that the Patriots' retaliation against Archibald Campbell "seems to have been prematurely begun, or to speak with more propriety, Severeties have been and are exercising towards Col. Campbell, not justified by any that Gen. Lee has yet received".48 As more people became aware of the true circumstances of Lee's captivity, Congress was forced to back-peddle. This is evident in a letter from John Hancock, the President of Congress, to George Washington dated 17 March 1777, which disingenuously stressed security considerations as the principal factor justifying Campbell of Inverneill's harsh treatment: "...it was not their [Congress'] intention that Col. Campbell should experience any other hardship than such confinement as is necessary to his security...".49 General Lee was exchanged for General Prescott in a "general exchange of officers" on 6 May 1778. This cartel made no provision for the private soldiers of either side, or for Campbell of Inverneill who remained a prisoner of war. Significantly, despite Washington's interventions, Campbell of Inverneill's treatment did not improve until Lee himself wrote to Washington and to Congress in May 1777 confirming that the British had actually treated him kindly, before there was any noticeable improvement in Campbell's conditions. On 2 June 1777 Congress passed a resolution requesting that the Council of Massachusetts and the Governor and Council of Virginia should ensure that Archibald Campbell and the five captured Hessian officers were treated humanely. As a measure of this improvement, it is reported that Campbell of Inverneill was liberated from the jail at Concord on parole in June 1777, and was allowed to stay with his jailor's family.50 Archibald Campbell, however, still faced daily abuse and threats from local Patriot supporters, which were serious enough for Washington to again complain to Congress that Campbell's treatment "cannot be justified either on the principles of generosity or strict retaliation".51

In August 1777 Washington finally received authority to propose an exchange to the British for Campbell and the Hessian officers. Once the exchange had been agreed in principle, Washington wrote to Campbell to offer his congratulations, and to apologize for the treatment he had received: "...Give me leave to congratulate you upon the prospect of your exchange, which will be immediately effected, Mr Boudinot having given orders to his Deputy to accompany you to Elizabeth Town, where I expect you will meet Lieutenant Col. Allen. I am sorry that a variety of Obstacles have prevented your Exchange before this time, but I can assure you, that no proposition has ever been made in your favour but has been acceded to on my part. I wish you a happy sight of your family and Friends, and am...". 52 Such congratulations were slightly premature as the practicalities of the exchange had been overtaken by events. In this respect, General Lee had already been exchanged, and it was to require further lengthy negotiations between the British and Patriot leaders before the exchange of Archibald Campbell for Ethan Allen was finalized. On 3 May 1778, Ethan Allen was eventually taken to Staten Island and remained there until 6 May 1778, when Archibald Campbell arrived from Elizabeth Town under the charge of Elias Boudinot, the Patriots' Commissary General in charge of British prisoners of war. Both Archibald Campbell and Ethan Allen had endured a long captivity, and Allen's own account of his ordeal suggests that the two men were deeply conscious of the manner in which their fates had intertwined throughout the conflict: "The next day Col. Archibald Campbell (who was exchanged for me) came to this place, conducted by Mr Boudinot, the then American Commissary of Prisoners, and saluted me in a handsome manner, saying that he never was more glad to see any gentleman in his life. I gave him to understand that I was equally glad to see him, and was apprehensive that it was from the same motive. The gentlemen present laughed at the fancy, and conjectured that sweet liberty was the foundation of our gladness; so we took a glass of wine together, and then I was accompanied by General Campbell, Colonel Campbell, Mr Boudinot and a number of British officers, to the boat, which was ready to sail to Elizabeth Town Point. Meanwhile I entertained them with a rehearsal of the cruelties exercised towards our prisoners; and assured them that I should use my influence that their prisoners should be treated in future in the same manner as they should in future treat ours; that I thought it was right, in such cases, that their example should be applied to their own prisoners; then exchanged the decent ceremonies of compliment, and parted".53 Campbell emerged from captivity with a similar concern for the remaining prisoners of the conflict. A letter of 13 May 1778 in Elias Boudinot's correspondence confirms that immediately after his release, Archibald Campbell proposed to the Patriot Commissary General that they should both go to New York "as he [Campbell of Inverneill] thought he could aid me greatly in furthering some immediate relief to our suffering prisoners".54 Significantly, after his release Campbell of Inverneill, showed great humanity towards his Patriot foes and took special care to protect civilians, rather than being embittered by his experiences as a prisoner of war. These aspects of his character were frequently commented upon by contemporaries, many of whom already admired him as a military commander of some distinction. Boudinot, for example, had great respect for Campbell of Inverneill, whom he found to be a man "of strict honour and unbounded benevolence". The Commissary General for Prisoners found this to be all the more remarkable, given his own opinion that Archibald Campbell had endured the worst captivity "of any Prisoner during the War".55 The view which emerges from contemporary sources is that Archibald Campbell stood out amongst the British military leadership, not just as a highly regarded battle field commander but also for his humanity, especially as many British generals justified their harsh treatment of Patriot prisoners on the grounds that they were "rebels" deserving little, if any, consideration.

Not long after the exchange, Archibald Campbell rejoined his old regiment, the 71st Highlanders, and was involved in the British operations which routed the Patriot privateers at Old Taapan on 28 September 1778.56 Campbell of Inverneill was then appointed to lead the British expeditionary force which was sent to the southern colonies, when the onset of winter began to make campaigning in the central and northern colonies extremely difficult. Apart from the weather, there were a number of important strategic factors which underpinned the British Government's decision to concentrate on the south. It was, for example, thought that launching an offensive there would allow Britain to exploit what was purported to be large reservoirs of Loyalist support in the region. This was highlighted in contemporary newspapers and journals such as the Annual Register (1779), which suggested that consolidating the British presence in the south would rally this support and "could not fail greatly to influence the future operations and fortunes of the war".57 The British Government also hoped that the re-capture of Georgia would help to protect the isolated British outposts in East Florida against Patriot incursions launched from neighbouring West Florida and, in turn, expose the Patriots' position in South Carolina. In addition, the capture of Savannah or Charleston were seen as vital to the support of British operations in the West Indies against the French and Spanish. Another key consideration was the plentiful supplies of rice, tobacco, indigo and deerskins in Georgia, for the use of the British armed forces, or to raise hard currency through export sales of these commodities to Europe. The expeditionary force commanded by Campbell of Inverneill, whom the newspapers described as "a brave and able officer", was made up of 3,500 men consisting of the two battalions of the 71st Highlanders, two battalions of Hessians, four battalions of Loyalists and a detachment of artillery. It sailed from Sandy Hook on 27th November 1778 with a naval escort led by Commodore Hyde Parker. The British plan stipulated that Major General Prevost, the commander of Crown forces in East Florida, should invade Georgia as soon as the expeditionary force sailed, and was to continue his advance until he joined up with Campbell of Inverneill's detachments. The combined British force was then ordered to attack the Patriot army at Savannah.58 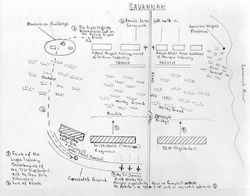 The Conclusion of the Southern Campaign

In less than a fortnight Campbell of Inverneill had recaptured almost the whole of Georgia, with the exception of the towns of Sunbury and Augusta, and had established military posts to secure the frontier with South Carolina. To feed his troops and the sailors attached to the naval squadron, Archibald Campbell seized all cattle belonging to local Patriots, and quickly established markets at the main British posts to encourage the farmers to sell their produce. To restore the Crown's authority, Campbell of Inverneill issued proclamations to the inhabitants requesting them to take oaths of allegiance to the Crown, and to join its Loyalist regiments, and offered rewards for the capture of Patriots raiding Georgia from their bases in South Carolina.

» Continued on next page