Witchcraft, Religious Fanaticism and Schizophrenia: Salem Revisited By Thurman Sawyer and George Bundren In the summer of 1692, Giles Corey was pressed to death because he refused to answer an indictment. Furthermore, some nineteen more souls perished because of the refusal to admit to alleged crimes they committed. Even two dogs were sentenced to death in the middle of the hysteria that broke out in Salem, Massachusetts. The crime they refused to admit to participating in, (or in the case of Corey not answering to) was the crime of witchcraft. These men and women died upon the sketchy and unreliable evidence brought before them in court. But what caused these Puritan people of Salem to execute their fellow friends and neighbors in the name of witchcraft? We have discovered that the lost lives of the accused witches were the direct result of the Puritan religious fanaticism of the day. Fanaticism in religion occurs when one goes beyond strict adherence to his or her faith. It occurred in Salem when death resulted from closed minded adherence to religious teaching. The Puritans were fanatical only when they took the lives of people around them, whom they had known and interacted with for years, because of accusations of witchcraft. In order for us to conclude our study of this event, we must consider several factors. The first section of this paper discusses the way in which Puritan life was totally dominated by religion, takes a look at the Puritan idea of the Devil, considers the behavior of the accused witches of Salem, and analyzes why the accused were sentenced to death. The second section of the paper will examine the possibility of schizophrenia, or mental illness, as playing a role in the Salem witchcraft episode. Let us begin. 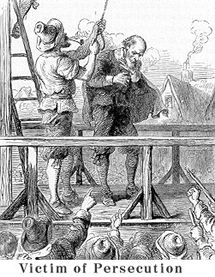 Puritan religious fanaticism was evident in Massachusetts a few years before 1692. In 1688, Goody Glover fell victim to the Puritan religious fanatics and lost her life. Consider the following: Following an argument with laundress Goody Glover, Martha Goodwin, 13, begins exhibiting bizarre behavior. Days later her younger brother and two sisters exhibit similar behavior. Glover is arrested and tried for bewitching the Goodwin children....Glover is hanged (after refusing to confess to the sin of witchcraft).[i] Any scholar of American history, upon undertaking the study of Puritans, need not be extraordinarily perspicacious to understand that religion was the central focus of the Puritan way of life in the 1690s. "Religion was not a department or phase of social life; it was the end and aim of all life; and to it, consequently, all institutions were subordinate."[ii] Puritans were entirely dependent on their religion to make sense of their seventeenth century, New England lives. Instead of reading about it (life) in the Sunday papers, as we do today, the old Puritans had a quaint custom of making history six days a week and, on the seventh, going to meeting to hear the minister explain it.[iii] One could argue that such religious fanaticism, or dependence on one's religion, could lead to a town's vulnerability to strange events. Indeed strange events were to strike the town of Salem, in a harsh manner, at the close of the seventeenth century. The cause of the aforementioned strange events was in great part due to the responsibility of Puritan religious leaders. Such leaders were upheld by the community as knowing the will of God and therefore, responsible for manifesting it, no matter the consequences. What was sheer fantasy in England appeared to be a practical and literal reality in New England, for here the clergy were, as a matter of fact, the first citizens and leading spirits; here the social and political life centered about the various settlements and these settlements were organized into congregations.[iv] To fully understand the reason for the Puritans' adherence to their faith is to understand their elementary, or fundamental, beliefs surrounding their religion. Let us consider some of the basic tenets of Puritan religion (Puritanism) in the 1690s. Puritans believed that life was the story of man's constant struggle with evil and natural elements. John Davenport's sermon "The Saints' Anchor Hold In All Storms and Tempests" demonstrates this. As the whole creation hath groaned ever since its original subjection unto vanity, earnestly expecting the manifestation of the Sons of God: so more especially in these latter days the traveling pains thereof have increased.[v] 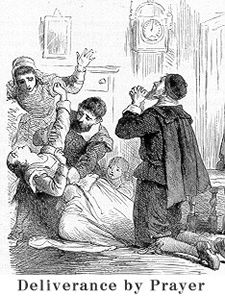