Frontier Battles of the Revolution

By James Pierce
Here are three Revolutionary War battles paid scant attention to in American history books. Also unique about these battles is that all three were fought by frontiersmen away from the center stage of the war.

The Battle of King's Mountain 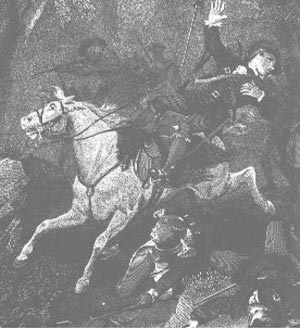 Patrick Ferguson killed while rallying his men at King's Mountain

The Battle of King's Mountain took place in October, 1780. It was a culminating battle of what was actually a bitter civil war that had raged in the Southern colonies throughout the Revolutionary War. Loyalist American Tories raided, burned, pillaged and hanged rebel American Whigs who, in their turn visited the same on the Tories with a vengeance. Thanks to the energies, talent and leadership of a British regular officer, Major Patrick Ferguson, the Tories had become dominant by 1780. Ferguson made a fatal mistake, though, when he threatened to cross the Appalachians to lay waste to the Watauga settlements along the headwaters of the Tennessee River if the "over the mountain men" did not declare for the crown.

The Westerners' reaction was immediate and aggressive. Isaac Shelby, leader of the Watauga settlements' militia was first to hear of these threats from Whig refugees coming west. He immediately contacted John Sevier, leader of the settlements and together they organized a force to go east over the mountains and strike Ferguson before he had a chance to get to them. Quick to join them were Colonel Charles McDowell, leader of 160 North Carolina Whigs who had retreated into the mountains, and Colonel William Campbell, commander of some 400 along the east side mountain headwaters in Virginia. They also attracted a number of lesser local leaders who were able to rally the ever temperamental and cantankerous backwoodsmen to their cause.

More than 1000 riflemen met at the appointed gathering place, Sycamore Shoals on the Watauga River, on September 26th. They took three days crossing the Blue Ridge and descending down into the Catawba watershed. At Quaker Meadows they were joined by an additional 350 North Carolina Whigs under Colonel Benjamin Cleveland. Their numbers had risen to 1400. But now troubles began to emerge. Tory spies (scouts) were beginning to track their movements while the backwoodsmen still had only a vague idea of the Tories' whereabouts. Squabbling among the leaders--backwoods leaders were notorious for their jealousy and contentiousness--threatened to dissolve the force into regional quarreling mobs. Shelby saved the day through a generous gesture; he proposed that Campbell, leader of the largest contingent, be given overall command. Cleveland, McDowell and Sevier agreed. They pushed on.

Whig spies now began reporting on Ferguson's movements; he had become aware of "a swarm of backwoodsmen" and had turned east back toward the protection of Cornwallis and the British regulars.

The small backwoods Whig army was so tired by now that it was no longer capable of hot pursuit in full force. Until now, they had lived on nothing but grass they found along the way for the horses and the small sack of corn that each backwoodsman had brought with him. They pushed on to Cowpens, where they conveniently found a Tory farmer's cow herd, which they slaughtered, roasted and feasted on. The officers also learned that Ferguson was camped to the east on a narrow flat-topped ridge of King's Mountain.

Leaving their most weakened members behind, the backwoodsmen, now reduced to 900 strong including their Carolina and Virginia allies, set off in rainy darkness after finishing their meal. There were several score among them without horses, who swore to keep up with their mounted compatriots on foot. They halted next day, when outriders captured a pair of Tories who described the lay of the land around the Tory camp exactly. They also described the multicolored hunting shirt Ferguson wore to make himself distinguishable to his men.

The frontiersmen reached the western side of the mountain about noon. They tied their horses to trees and started out on foot, each band under its own leader, to form a line along the base of the ridge.

Ferguson had about 900 men in camp, among whom there were 100 American volunteer Loyalist Regulars who were thoroughly trained as British soldiers. The others ranged from Tory militia to simple cut throats and barn burners looking for loot. 200 more of his men were out foraging. At the sound of the alarm from the pickets, Ferguson ordered drums beaten, mounted his horse, and used his advantage of being at the top of the hill looking down to lead bayonet charges as the backwoodsmen scrambled upwards.

The backwoodsmen, operating as small groups under their own local leaders, were repulsed again and again by the Tories' massed charges and musket volleys until they came to realize that the Tories, shooting downhill, were almost always overshooting them. The frontiersmen had been ordered to "give them Indian play"--scatter, then rally and strike back. Each was also exhorted to be "his own officer". Thus, they gave way only to seek cover behind rocks and trees from where they began to snipe at their adversaries with their customary deadly accuracy. At every chance, they would slip from rock to tree, climbing ever higher up the mountain toward the Tories.

Ferguson lost two horses charging downhill into the very midst of the frontiersmen; he broke his sword hacking at some he had ridden down, but even he could not stop disaster. As he charged Campbell's men on one side of the mountain, Shelby's cohorts would swarm up the other, screaming their war whoops the whole while. Sevier's men, nearing the summit, shot Ferguson off his horse and killed him. Resistance continued. Sevier's forces swarmed over one side of the summit; Campbell and Shelby circled around and led more men over the other side.

The Tories had lost one third of their force when they began running back toward their tents and baggage wagons. They tied handkerchiefs on their gun barrels and ramrods. Shelby rode among them calling them to lay down their weapons. Campbell, his horse killed, ran among his men shouting at them until he persuaded them to stop killing their beaten enemy. The battle was over; it had lasted an hour.

Vengeance followed. The frontiersmen lost the loose military discipline that had held them together up to and through the battle. They shot a considerable number of their prisoners and hanged some captured officers. They looted the surrounding farms of Tory landowners. Then they vanished back over the mountains to the West as quickly as they had appeared.