She was described as having great personal beauty, with dark eyes and hair, strong-willed yet of a kindly disposition. Daughter of Frederick Philipse, speaker of the New York Colonial Assembly and one of the early great landholders on the Hudson River, Mary Philipse was carefully educated and enjoyed all of the advantages that society offered.

George Washington was a Virginia Colonel, 24 years of age, who had just won his first laurels on the field of battle. On his way to Boston to meet General Shirley, he stopped at the house of Colonel Robinson in New York. There he met Miss Mary Philipse, visiting her brother-in-law during the winter months. George's young heart was touched by her charm and beauty. He left reluctantly, continuing on to Boston. On his return he was again the willing guest of Colonel Robinson. He remained there, in Mary's company, as long as duty would allow. Speculation is that he offered her his hand but was refused, though that is in doubt. The most probable version of the story is that he was called away by his public duties before he was able to make sufficient overtures into the lady's heart. 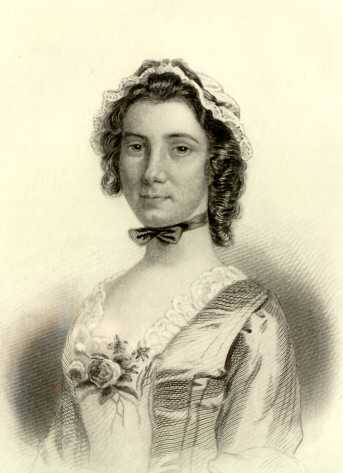 Truth was that Washington's time was taken up almost totally by military matters. Shortly thereafter, he heard that Colonel Roger Morris, his companion-in-arms and confidante on the bloody field of Monongahela, won Mary's hand. The couple were married in 1758. They built a mansion on the outskirts of New York where they lived happily, until the dark days of the Revolution. Then, after Colonel Morris affirmed his allegiance to England and the King, their house was confiscated and, ironically, became Washington's headquarters in the autumn of 1776.

Mary, her sister and the wife of Rev. Charles Inglis were the only women accused of treason during the Revolution. Mary went to England with her husband where he died in 1794. Mary lived for another 31 years. She died at the age of 96 and was buried by her husband's side near Saviour-gate church in York.