How The Declaration of Independence Was Written

At the time he was selected to write the Declaration, Jefferson was living at the corner of Seventh and Market Streets in Philadelphia. His lodgings were in a three story house owned by a bricklayer named Graff. Few houses had been built in the vicinity, offering Jefferson "a freely circulating air." He lived there along with the landlord's young wife and an infant son. That son was afterward told that he often sat on the great man's knee. 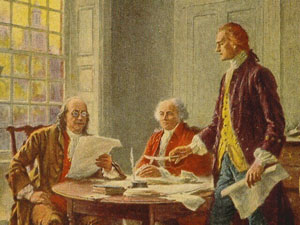 Jefferson reviews his draft with Adams and Franklin.

Jefferson occupied the entire second floor of the house, a bedroom and parlor with stairs and a passageway separating the two rooms. Jefferson wrote in the parlor, using a portable writing box that he had designed himself. Previously, he had lodged with a cabinetmaker who constructed the writing box from Jefferson's own drawing. In the last year of his life Jefferson gave the writing box to the husband of his favorite granddaughter, Ellen Randolph. "It claims no merit of particular beauty," he remarked at the time. "It is plain, neat, convenient and, taking no more room on the writing table than a moderate quarto volume, it dispalys itself sufficiently for any writing."

While the parlor on the second floor may have been quiet and airy, it contained no such library as Jefferson had left behind at Monticello. Later in life, Jefferson wrote that Richard Henry Lee had charged him with copying the Declaration from Locke's Treatise on Government. But Jefferson turned to neither book nor pamphlet while writing his draft.

He wrote: "I did not consider it any part of my charge to invent new ideas altogether and to offer no sentiment which had ever been expressed before." His focus, he later said, "was not to find out new principles, or new arguments never before thought of, not merely to say things which had never been said before; but to place before mankind the common sense of the subject."

As such, Jefferson drew on his own draft of a constitution for Virginia which he had completed a few weeks earlier, and George Mason's draft of a "Declaration of Rights...Recommended To Posterity as the Basis and Foundation of Their Government." It is generally agreed that Jefferson used his constitution of Virginia as the basis for his indictment against George III and the latter for his theory of natural law and the nature of government.

In the second paragraph of the Declaration, Jefferson expressed a whole system of philosophy and an entire theory of government, giving expression in language regarded as both simple and sublime. Its philosophy of government is based on the theory of natural rights, which were commonly accepted in the eighteenth century. It is founded on the self-evident truth that all men, being created equal, were endowed under the laws of nature and of nature's God with certain inalienable rights, namely: life, liberty and the pursuit of happiness.

The idea of government by consent, based upon rights derived from natural law, was an ancient one. But this theory of government in the Declaration of Independence was the first example in history in which a new nation erected its government "of the people, by the people and for the people."

Jefferson never claimed originality for the philosophy he embodied in The Declaration. It was an expression of the mind of the American patriots of that age and he was among the first of these.

In explaining his involvement, Jefferson said he was asked by the committee of five to write the draft. There appear to have been several meetings of the whole group, discussing the general character and form of the document.

Jefferson first submitted his draft to Adams and Franklin because he especially valued their judgment. Suggestions of theirs were written in, and the document was accepted by the full committee. It should be noted that from the time Jefferson was named to the committee of five to write the Declaration to the time it was submitted to the Congress took only seventeen days.

The original draft, or the Rough Draft as it was later known, remains as a master copy on which all later changes were marked. Jefferson kept it all his life. One man who looked at it at Monticello said it was "scored and scratched like a school boy's exercise." Some of the changes are labeled as those of Franklin or Adams. Others in the handwriting of Jefferson may represent another's judgment or his own. Still others, as we know, were made by Congress.

Thomas Jefferson's Rough Draft of the Declaration of Independence is one of the most historic state papers in all history. It ranks with the Magna Carta, the Declaration of Rights and other great documents in the struggle to achieve liberty.