The Campaign to Vincennes

George Rogers Clark and the Campaign to Vincennes was part of the conflict between western bordermen and the Ohio Indian nations and their British allies that had gone on since Dunmore's War in 1774. British support for Indian nations centered in Detroit and was under the capable direction of Lieutenant Colonel Henry Hamilton, named "Hair Buyer" by frontier Americans because of his reputed paying of bounty for American scalps. 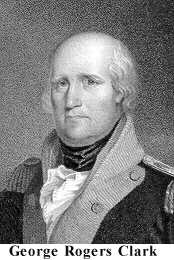 George Rogers Clark was commander of Virginia Militia in the West the force responsible for protecting the settlements south of the Ohio River in present day Kentucky and West Virginia. He was then in his early twenties and very vigorous and ambitious. In late 1777, he went to Williamsburg where he managed to convince Thomas Jefferson, George Mason and Richard Henry Lee to support him in raising an expeditionary force of frontiersmen to capture the British supply centers in the Illinois country; Kaskaskia, at the mouth of the Kaskaskia river where it joins the Mississippi about 50 miles south of St. Louis, Prairie du Rocher, about 17 miles north of Kaskaskia, Cahokia still further north near present day East St. Louis, and Vincennes 180 miles to the east on the Wabash River in present day Indiana. If possible, they would also capture Detroit itself far to the north. These centers were all provisioning Indian expeditions against Kentucky, West Virginia and Western Pennsylvania. Except for the few British soldiers actually at the posts, he anticipated little difficulty with the Whites living in these supply centers; most were French living under British rule, but with little love for the Crown.

Clark's political allies, Jefferson and company, put the idea to Governor Patrick Henry who, convinced to support them, was able to wrangle 1200 pounds from the Burgesses under the pretext of using the money strictly for the defense of the Kentucky frontier; no mention of an invasion to the north came up.

Clark mustered his force, only a disappointing 200 men strong as it turned out, at the Falls of the Ohio on June 26, 1778. They shot the rapids that day under a total solar eclipse, which Clark hailed as a good omen. They rode the Ohio down nearly to the mouth of the Tennessee. There they hid their boats and struck out overland depending only on what they could carry as supplies.

After a strenuous march, the last two days without food, they spotted Kaskaskia on July 4th. The settlement, unguarded, fell to Clark without hostilities. He then sent a small detachment out to secure Prairie du Cocher and Cahokia. The two smaller settlements likewise offered no resistance.

This was when Clark showed his talents in what is now called cross cultural communication. He was able to persuade almost all the French inhabitants of these settlements to throw off their allegiance to England and join the American cause. Guarantees of freedom of religion and good treatment by the men of the expedition made their impression. In fact, one of the French, Father Pierre Gibault, even volunteered to make the long expedition to Vincennes to persuade the French people there to throw in with the Americans.

Father Gibault was completely successful in his efforts and in August Clark sent out another small force to occupy Vincennes and the frontier outpost, Fort Sackville, that guarded it.

By summer's end, Clark had accomplished all his main goals without firing a hostile shot or losing any men through enemy action. However, his hold was very tenuous. The Indians, always deadly, could easily snuff them out. Indeed, Clark's skill in dealing with the French worked equally well in dealing with Indians; his diplomacy was probably all that had prevented attack to date. His command, very small to begin with, was also beginning to shrink rapidly through expired enlistments and desertions. He was able to keep his force from melting completely away only through the good offices of Oliver Pollock, an American merchant based in New Orleans who believed strongly in Clark's aims. Pollock threw considerable of his own capital into getting supplies up the Mississippi to Cahokia, thereby solving the expeditionary force's supply problems for the present. Finally, there was the threat of the British presence in Detroit.

Hamilton was a tough soldier and very well suited for frontier command. As soon as he learned of Clark's successes he saw that Detroit would be next. Although his military strength and been severely reduced through troop demands in other theaters, he was able to scrape together some 175 Europeans, mainly French militia, and 60 Indians. This force set out from Detroit bound for Vincennes on October 7,1778. The journey was very demanding; it stretched over 400 miles, south to the shores of Lake Erie, down the Maumee to the Wabash and from there into Southern Indiana. It included long portages and coping with rivers in flood. It was testament to Hamilton's ability that he still had a working force when they arrived at Vincennes on December 17th.

As soon as the invaders were sighted, the population of the settlement rushed out to declare themselves English subjects. The small militia under Captain Helm saw no point in fighting and surrendered.

When news of Vincennes' fall reached Kaskaskia and Cahokia, the citizenry went into full panic. Clark, his force now shrunk to about 100 men would have been helpless had Hamilton struck against him immediately. However, Hamilton need to resupply, which required time to get materials transported from Detroit. Also, the mild winter had produced vast areas of shallow flooding in the 180 miles between Vincennes and the two smaller settlements; something Hamilton depended on to keep the Americans away from Vincennes. At the same time, he had no great desire to push through the flooded countryside himself. So, time passed.

During this time, Clark and his officers, aided by the totally committed Father Pierre Gibault, worked tirelessly to put heart back into the population. A less determined invader would have been content with the consternation and loss of prestige inflicted on the British by the expedition's initial success and retired gracefully back to Kentucky, but not Clark.

Hamilton in Vincennes; here was Clark 180 miles away in Kaskaskia and Cahokia. What shall we do? Clark's resolution; attack! Not only did he intend to retake Vincennes, he also considered going on to take Detroit too! The plan decided ; they got as many new recruits and reenlistments into the expedition as possible for the trek across 180 miles of flooded rivers and prairie to Vincennes and the attack.

Some local militia joined the Kentuckians and a few new and reenlistees drifted north from the Ohio so that, when they started out on February 6, 1779, the American force could muster almost 180 fighters. This was a time when Michael Stoner very likely joined the expedition. There was no record of his being with the first group; those who assembled at the Falls of the Ohio and whose records of entry were being carefully kept. By this time the record keeping had become less meticulous.

Things went well the first days of their march. Water over the flooded land was rarely over a few inches deep, game was plentiful and the temperatures were mild. They were at the banks of the Little Wabash within 20 miles of Vincennes by February 13th. That's when things began to get really difficult.

The surface flooding was deeper; the men now were wading through icy water that was waist high. Wild game had mysteriously vanished and supplies were running low. On the seventeenth they reached the Embarrass River, running at high flood and blocking their path. It took them until the eighteenth to find a ford and cross. They were constantly wading in water from ankle to chest high and it was taking a toll in exhaustion and sickness. They passed over the Wabash on the 20th. They captured a Frenchman from Vincennes that day and learned from him that Hamilton hadn't the faintest inkling of their being in the vicinity. On the twenty first, they barely covered three miles, wading the whole time through water shoulder deep holding their rifles and powder over their heads. The next day brought no progress at all. The men grew continually weaker and more exhausted.

The 23rd brought them to a crisis. The men held back, unwilling or unable to proceed. Clark took the lead, going into the water once more shouting "follow me!". His captain, Joseph Bowman, and 25 riflemen brought up the rear under orders to shoot stragglers. This was the worst day of the expedition.

Finally they reached dry ground, a forested strip scarcely two miles from Fort Sackville, the military post protecting Vincennes. Throwing caution aside, the group lit fires here, dried out their clothes, ate the last of their rations, and prepared for battle. Here they also learned from another captured Frenchman, somewhat to their dismay, that 200 more Indians had joined Hamilton in the fort. Also, Clark's ammunition was almost gone.

Unlike the responses of many, bad news seemed to stimulate George Rogers Clark to action instead of despair. He moved immediately and decisively. Being careful to hide his weaknesses from the captured Frenchman, Clark sent him as messenger to Sackville to inform Hamilton that he was going to capture Sackville that night. Furthermore, friends of the United States should stay in their homes; those holding to England should join the garrison at the fort.

The messenger sent off, Clark next formed his men up into two small divisions and marched them into Vincennes down the main street, drums beating. Once there, he subdivided his force into smaller units and had them march through the side streets and back into the main street, hoping to give an impression of being a much larger group than they really were.

It worked; nobody left Vincennes for Sackville. Instead, the inhabitants opened secret caches of ammunition to the invaders, an unexpected windfall that Clark's force took full advantage of. Rumors began to reach the fort of endless numbers of Americans swarming into Vincennes. This resulted in Hamilton's Indian allies disappearing like the morning mists.

At sunset, Clark marched his legion out of Vincennes toward the fort, drums beating all the while. Once at the fort, they commenced firing on it with their rifles; they had no artillery. Standard military thinking at that time would never have predicted victory for Clark's forces; they were riflemen laying siege to a fort with eleven foot palisades and corner bastions equipped with light artillery field pieces. They simply did not have the firepower to take a fort equipped with artillery and manned by the best army in the world at that time.

However, Clark and his men either didn't know or were not impressed by that line of thinking. Their approach was to use their extremely good marksmanship skills to pick off every British soldier who exposed any part of his anatomy to their sight. They concentrated on the gun crews in the corner bastions, who had to expose themselves to load, aim and fire their artillery. By the end of the next day, after some negotiation, Hamilton and his little force surrendered. The victory for Clark was made even more pleasing when one of his squads was able to capture a British supply column coming down the Wabash to the fort.

Clark's Vincennes Campaign, in terms of numbers involved, was a small one; his forces never numbered much above 200; the same was true for his British opponents, but it was important because it secured the Illinois country for Virginia, and the United States for the rest of the Revolutionary War. Without Clark's campaign, there is a good chance that the U.S.-Canada border would have been considerably further south than it is today; perhaps even as far south as the Ohio River.