Richard Allen was a success. Born into slavery in Philadelphia in 1760, he died in 1831 not only free but influential, a founder of the African Methodist Episcopal Church and its first bishop. Allen's rise has much of the classic American success story about it, but he bears a larger significance: Allen, as one of the first African-Americans to be emancipated during the Revolutionary Era, had to forge an identity for his people as well as for himself. 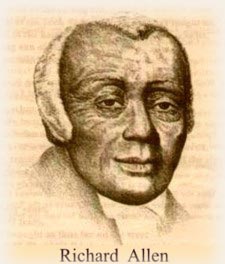 Sold as a child along with his family to a farmer in Delaware, Allen began his ascent in 1777, when he was converted to Methodism by Freeborn Garretson, an itinerant preacher. Garretson also converted Allen's master and convinced him that on Judgment Day slaveholders would be "weighted in the balance, and . . . found wanting." Allowed by his repentant owner to buy his freedom, Allen earned a living sawing cordwood and driving a wagon during the Revolutionary War. After the war he furthered the Methodist cause by becoming a "licensed exhorter," preaching to blacks and whites from New York to South Carolina. His efforts attracted the attention of Methodist leaders, including Francis Asbury, the first American bishop of the Methodist Church. In 1786 Allen was appointed as an assistant minister in Philadelphia, serving the racially mixed congregation of St. George's Methodist Church. The following year he and Absalom Jones, another black preacher, joined other ex-slaves and Quaker philanthropists to form the Free African Society, a quasi-religious benevolent organization that offered fellowship and mutual aid to "free Africans and their descendants."

Allen remained a staunch Methodist throughout his life. In 1789, when the Free African Society adopted various Quaker practices, such as having fifteen minutes of silence at its meetings, Allen led a withdrawal of those who preferred more enthusiastic Methodist practices. In 1794 he rejected an offer to become the pastor of the church the Free African Society had built, St. Thomas's African Episcopal Church, a position ultimately accepted by Absalom Jones. A large majority of the society had chosen to affiliate with the white Episcopal (formerly Anglican) Church because much of the city's black community had been Anglican since the 1740s. "I informed them that I could not be anything else but a Methodist, as I was born and awakened under them," Allen recalled.

To reconcile his faith and his African-American identity, Allen decided to form his own congregation. He gathered a group of ten black Methodists and took over a blacksmith's shop in the increasingly black southern section of the city, converting it to the Bethel African Methodist Episcopal Church. Although the Bethel Church opened in a ceremony led by Bishop Francis Asbury in July 1794, its tiny congregation worshiped "separate from our white brethren."

Allen's decision to found a black congregation was partly a response to white racism. Although most white Methodists in the 1790s favored emancipation, they did not treat free blacks as equals. They refused to allow African-Americans to be buried in the congregation's cemetery and, in a famous incident in 1792, segregated them into a newly built gallery of St. George's Methodist Church. But Allen's action also reflected a desire among African- Americans to control their religious lives, to have the power, for example, "to call any brother that appears to us adequate to the task to preach or exhort as a local preacher, without the interference of the Conference." By 1795 the congregation of Allen's Bethel Church numbered 121; a decade later it had grown to 457, and by 1813 it had reached 1,272.

Bethel's rapid expansion reflected the growth of Philadelphia's black population, which numbered nearly 10,000 by 1810, and the appeal of Methodist practices. Newly freed blacks welcomed "love feasts," which allowed the full expression of emotions repressed under slavery. They were attracted as well by the church's strict system of discipline--its communal sanctions against drinking, gambling, and infidelity--which helped them bring order to their lives. Allen's preaching also played a role; the excellence of his sermons was recognized in 1799, when Bishop Asbury ordained him as the first black deacon of the Methodist Church.

But over the years Allen and other blacks grew dissatisfied with Methodism, as white ministers retreated from their antislavery principles and attempted to curb the autonomy of African-American congregations. In 1807 the Bethel Church added an "African Supplement" to its articles of incorporation; in 1816 it won legal recognition as an independent church. In the same year Allen and representatives from four other black Methodist congregations (in Baltimore; Wilmington, Delaware; Salem, New Jersey; and Attleboro, Pennsylvania) met at the Bethel Church to organize a new denomination, the African Methodist Episcopal Church. Allen was chosen as the first bishop of the church, the first fully independent black denomination in America. He had succeeded in charting a separate religious identity for African-Americans.

Allen also recognized the importance of education to the future of the African-American community. In 1795 he opened a day school for sixty children and in 1804 founded the "Society of Free People of Colour for Promoting the Instruction and School Education of Children of African Descent." By 1811 there were no fewer than 11 black schools in the city.

But where did Allen think "free people of colour" should look for their future? This question had arisen in Philadelphia in 1787, when William Thornton had promoted a plan devised by antislavery groups in London to settle free American blacks (and emancipated slaves from the West Indies) in Sierra Leone, an independent state they had founded on the west coast of Africa. Many blacks in Boston and Newport had endorsed this scheme, but the members of Philadelphia's Free African Society had rejected it. They preferred to seek advancement in America, but on their own cultural terms. The process took place on two levels: As a social group, Philadelphia blacks embraced their ancestral heritage by forming "African" churches and benevolent societies. As individuals, however, they affirmed their American identity by taking English names (although virtually never those of their former owners). This dual strategy brought pride but not significant gains in wealth and status. Nonetheless, Philadelphia's African-Americans rejected colonization when the issue was raised again just after 1800: only four people signed up for emigration to Sierra Leone.

Instead, the city's black community petitioned the state and national governments to end slavery and the slave trade and repeal the Fugitive Slave Act of 1793, which allowed slaveowners to seize blacks without a warrant. As if to underline the importance of these political initiatives, Allen was temporarily seized in 1806 as a fugitive slave, showing that even the most prominent northern blacks could not be sure of their freedom. This experience may account for Allen's initial support for the American Colonization Society, a predominantly white organization founded in 1817 to promote the settlement of free blacks in Africa. This scheme was immediately condemned at a mass meeting of nearly 3,000 Philadelphia blacks, who set forth a different vision of the African-American future: "Whereas our ancestors (not of choice) were the first successful cultivators of the wilds of America, we their descendants feel ourselves entitled to participate in the blessings of her luxuriant soil."

Philadelphia's black community, including Allen, was more favorably inclined toward the Haitian Emigration Society, which was founded in 1824 to help African-Americans settle in that island republic. But when that venture failed, Allen forcefully urged blacks to remain in the United States. In November 1827 he made a compelling argument in Freedom's Journal, the nation's first black newspaper: "This land which we have watered with our tears and our blood is now our mother country."

Born a slave of African ancestry, Allen learned to live as a free man in white America, rejecting emigration and preserving his cultural identity by creating separate African-American institutions. But it meant that he cast his lot, and that of his descendants, with a society pervaded by racism. It was a brave decision, both characteristic of the man who made it and indicative of the limited choices available to those freed from the bonds of slavery.

(Reprinted from James A. Henretta, Elliot Brownlee, David Brody, Susan Ware, and Marilynn Johnson, America's History, Third Edition, Worth Publishers Inc., 1997 Copyright: Worth Publishers Inc. For the personal use of subscribers of the Early America Review; for permission to reprint or duplicate, contact Paul Shensa, Worth Pub. 1-212-475-6000)