Regulators Movement in The Carolinas - 2 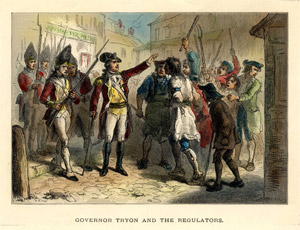 Gov. Tryon and the Regulators

James Hunter, as mentioned before, was considered the “general of the Regulation.” Hunter was known for traveling around to Regulator meetings apart from Orange County and speaking of news around the western counties. Probably, the second most proficient vocal leader of the Regulation, Hunter not only went around to various Regulator meeting but also hand delivered numerous advertisements and petitions to provincial officials. Because of this distinctive assignment and his overall profile Hunter was referenced as the “chief of the Regulators” in a Bethabara Diary dated in 1771. After the Battle of Alamance in 1771 Hunter and other leaders such as Husband fled the area for fear of death. Governor Tryon marched his men onto the farm lands of both these men as well as others and destroyed everything. Their lands were sold off by the sheriff because of their treasonous activities. The last person on the list was Hermon Husband, who many historians consider the actual leader and instigator behind the Regulation. Husband’s involvement almost seems to be that of an observer looking for a step up. It was the historian Whittenburg who placed the reason for Husband’s involvement on him wanting to take control of county government away from this ring of elite who took away control in the mid 1750’s. Husband tried to take power away through elections however, when that did not work he began speaking publicly about the evils of these men from the east who took control of their western counties. It was Husband that brought the Regulation to Orange County and spread the propaganda of the evils of the appointed officials. At all times Husband preached pacifism. He did not want to see violence arise because of their grievances. He was not involved in the riots in April of 1768 nor the one in 1770. Additionally, during the Battle of Alamance he was present at the beginning but before the fighting started he fled. Husband’s involvement ends with his playing the role of instigator. Only once did Husband sign a petition from the Regulators and at no time was he a principal leader or voice of representation for the Regulators. His role was visible from the side of the Governor and other local officials but appears very minimal when it comes to the primary sources which were found. Tryon believed the Regulation was only an “infatuation, instigated by a few Persons, whose characters are as desperate as their fortunes, and who having nothing themselves to loose, scruple not to involve men of a far different character and stamp, into all the Calamities and Miseries of civil discord, and who out of the general confusion, assuredly hope that the increase of their fortunes, may keep pace, with the weight, & measure of their Crimes.” Governor Tryon was convinced the rebellion in Orange County was the result of only a few men who have instigated the emotions of men to do their bidding for them. Those “few Persons” were men such as Rednap Howell, James Hunter, and Hermon Husband. In his attempt to single out leaders of the Regulation, Tryon failed to address the issues at hand and realize that more than just a few were unhappy with the way they had been treated by lawyer, merchants, and local politicians. For the May 11th meeting the Regulators were hopeful that a resolution could be reached and their grievances could be met. Tryon however wanted the hostilities to end and did not believe negotiating with the Regulators was needed. He issued a proclamation which demanded the immediate end of hostilities in Orange County.

Edmund Fanning defended Tryon’s position by issuing a letter of his own to the Regulators. He wrote to them as if he were the champion of Orange County addressing them as “my friends”. He even suggested that if a grievance had been brought before him he would have taken the petition to Tryon himself as a representative for the people of Orange County. At the same time though, Fanning did not believe that any person had been “cheated or wronged by the Burgesses, Justices, Vestry or Sheriffs, in their public settlements.” Continuing with the position of Tryon, Fanning refused to meet with Regulators on the 11th of May and issued arrest warrants for Hermon Husband and William Butler. According to Husband’s arrest warrant he was charged for being “guilty of Traterously and feloniously Conspiring with others in stirring up an Insurrection among his Majesty’s Liege Subjects of the said County.” Once again the disappoint of the Regulators led to a riot. With Hermon Husband in jail nearly 700 men marched into Hillsborough on May 2, 1768 to force the release of the prisoners. Tryon and Fanning’s belief that only a few persons were leading the mob and jailing them would end everything had failed. They still organized in force. The Regulators began sending petitions straight to the governor, as his secretary had suggested they do. The needed to show the governor they were serious about change. “We the inhabitants of Orange County pay larger Fees for recording Deeds than any of the adjacent Counties and many other Fees more than the Law allows,” this opening line in their petition spells out the main complaint the Regulators had against the local officials. Silencing Tryon’s first belief that only a few persons were inciting the men to civil disobedience, 480 men signed this petition. The sheer number of signers displays the magnitude of the Regulators. In this petition, it was stated that other petitions were included in order to fully explain their grievances. One of these petitions included was more than likely petition No. 11. It was signed by a select committee, as opposed to all 480 from the greater petition, which consisted of John Low, Harmon Cox, John Marshal, William Cox, William Moffitt, George Hendry, and two of our principal names James Hunter and Rednap Howell. This tells us that Hunter and Howell were present at nearly all Regulator functions but it also shows us that many men, besides Hunter and Howell, played key roles in the Regulation. As June arrived so did Howell and Hunter with the petitions for the Governor on June 20, 1768. Governor Tryon had decided it was time for him to head to Hillsborough himself and get a better handle on the situation. It seemed along his travels to Hillsborough that Tryon better understood what the Regulators’ grievances were and on July 21, 1768 Tryon issued the proclamation that many thought, including Tryon himself, would end the Regulation. Tryon’s proclamation required that all public officials to “cause fair tables of their Fees, legally established, to be affixed up in their Respective Offices.” Tryon, with this proclamation, was trying to crack down on the local officials who were overtaxing and overcharging Orange County farmers. His goal was to ensure that all local and court officials do not “demand or receive other Fees, for public business transacted in their Offices, than what was established by proper authority, upon pain of being removed from their said Offices, and prosecuted with the utmost severity of the Law.” This was not the first proclamation to request this of the western officials however Tryon followed up on this by taking some of the men to court for their extortionate practices. This move did not appease the Regulators because they wanted officials completely removed from office, something Tryon refused to do. 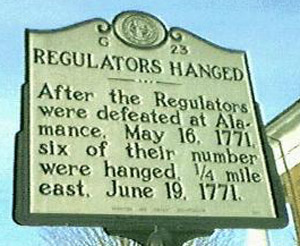 A plaque commemorates the defeat of the Regulators and the hanging of six of them.