The Northwest Ordinance of 1787 allowed for the creation of as many as five states in the northwest portion of the Ohio Valley on lines originally laid out in 1784 by Thomas Jefferson. Known as The Northwest Territory, the new federal lands were east of the Mississippi, and between the Ohio River and the Great Lakes. 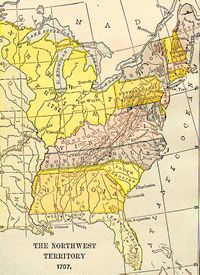 The ordinance defined the boundaries of the states, excluded slavery and required that 60,000 inhabitants be present for statehood. Major General Arthur St. Clair was appointed its first Governor.

Ultimately, the territory was organized into the present states of Ohio, Indiana, Illinois, Michigan and Wisconsin.