This original map appears in The American Gazetteer published by Jedidiah Morse in 1797. The map, specially engraved for the country's first geographical dictionary, shows a relatively accurate physical outline of North America, providing students of this era with a valuable historical marker.

In place are the chief cities and towns that make up the original 13 states. Shown also are the headwaters of the Mississippi River as that great waterway flows through the Louisiana Territory culminating at New Orleans. 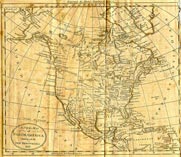 Though most of the region to the west had yet to be explored, the west coast of America shows San Diego and the Bay of St. Pedro (Los Angeles). The many geographical features of this map — both real and imagined — offer a fascinating picture of the face of America in 1797.