In 1797 Jedidiah Morse published "The American Gazetteer," considered to be the country's first gazetteer. In this book readers were presented with more than 7000 separate articles, all bearing on a myriad of geographical details describing the American continent.

Prominently featured were the populations of most of the states, cities and towns based on the infant nation's first official census in 1790. Morse's voluminous work also contained seven new maps, including a map of North America as it was known at the time, and maps showing the northern and southern parts of the United States. 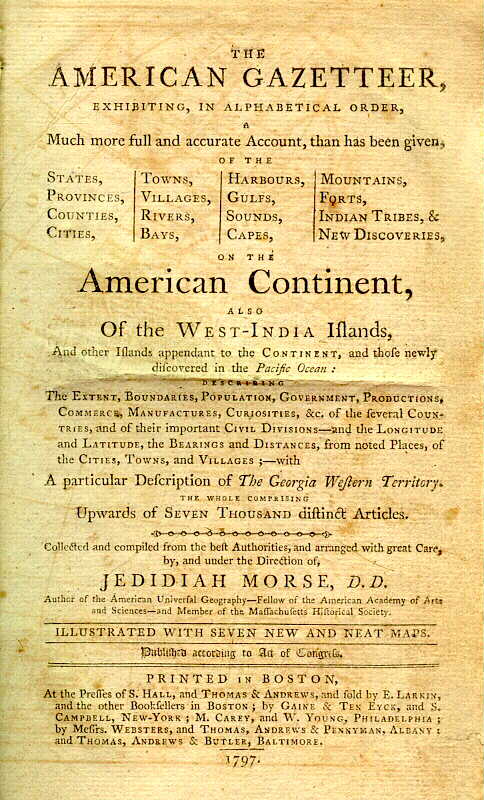 In 1797 Jedidiah Morse published “The American Gazetteer,” considered to be the country's first gazetteer.

The Gazetteer followed his publication of "Geography Made Easy" when he was 23. After 25 editions of that publication, Morse had earned the well-deserved title of "The Father of American Geography."

In addition to his accomplishments as a geographer, Jedidiah Morse was a clergyman, licensed to preach as a Congregational Church minister. Born in Woodstock, Connecticut in 1761, Morse became pastor of the First Congregational Church in Charlestown, Massachusetts. He was one of the founders of two newspapers, The Massachusetts Mercury in 1793 and the New England Palladium in 1801.