Arthur St. Clair: The Man and His County

By Thomas Jewett A county as large as a state, such was the case when St. Clair County, Illinois was originally formed in 1790. The County encompassed most of what is now the State of Illinois. It was the creation and namesake of Arthur St. Clair: soldier, politician, and egotist. St. Clair’s life was a study of contrasts, enjoying great wealth and political and military esteem, but ending in poverty and ignominy. He was born in 1734 or 36, in Thurso, Caithness County, Scotland. St. Clair attended the University of Edinburgh, studying medicine. He altered his career plans in 1757 when he purchased a commission in the British Army and came to the American Colonies with Admiral Boscawen. During the French and Indian War, St. Clair served with some distinction under General Wolfe and later as commander of Fort Lignier in Pennsylvania. St. Clair left the British Army, married, and settled in Pennsylvania, becoming that area’s largest landowner. He was well liked and respected by the Americans and held a variety of local and colony wide positions of an elective and appointive nature. 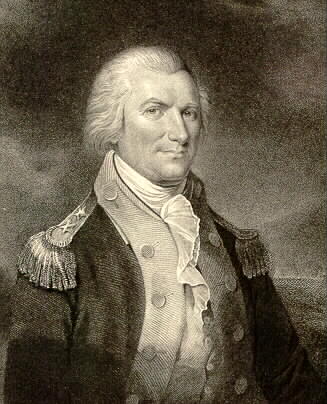 At the outbreak of the Revolutionary War, St. Clair, because of his previous military experience, was appointed a Colonel in the Continental Army with orders to raise a regiment for operations in Canada. He was promoted to Brigadier-General in August 1776, and joined Washington in the retreat through New Jersey. While with Washington he credited himself in the Battles of Trenton and Princeton. St. Clair rose to the rank of Major General and in 1777 was placed in command of Fort Ticonderoga. The Fort was considered impregnable, but St. Clair abandoned the position to the advancing British. He was court-martialed for this action. The Court sustained St. Clair’s decision and Congress concurred. St. Clair later fought at Yorktown and was with Green in the Carolinas at the culmination of the War. With the end of hostilities, St. Clair returned to Pennsylvania and represented that State to the Continental Congress in 1786. He became President of Congress in 1787. During his tenure in Congress provisions were enacted to govern the vast lands west of the Appalachian Mountains and east of the Mississippi River. George Rogers Clark had captured this vast area in a series of daring raids during the War. Clark serving in the Virginia Militia conquered and claimed the territory for the Sovereign Dominion of Virginia. In October 1778, the Virginia Assembly formed the area into the County of Illinois. But, Illinois County did not remain a possession of Virginia for long. On the adoption of the Articles of Confederation, the States had to cede all their claims to western lands to the national government. The Northwest Ordinance of 1787, enacted during St. Clair’s presidency, was Congress’ attempt to regulate the new territory. The Ordinance called for a governor, a secretary, and a court of three judges to administer and regulate the area. St. Clair was appointed as the Territory’s first executive. He did not seek the office and later reflected, “to accept the office of governor was the most imprudent act of my life.” His reaction can be understood when it is realized that he was responsible for an area that included the present states if Wisconsin, Indiana, Ohio, Michigan, and Illinois. The Territory was a wilderness inhabited by hostile Indians, unpatriotic French, and the type of misfits and criminals that a lawless frontier attracts. Governance of such an area was all but impossible. One of the first acts of Governor St. Clair on his arrival at the Territorial capital, Marrietta, Ohio, in July 1788, was to begin subdividing the Territory into more manageable sections or counties. He journeyed to Kaskaskia, Illinois in February of 1790. While there, he appointed various officers to administer justice and adjust land claims. St. Clair decided to establish a new county with Kaskaskia as the seat of government. He named the county for himself.

The boundaries of the original St. Clair County included about two-thirds of the present State of Illinois, “beginning at the mouth of the Little Makinaw Creek, where it empties into the Illinois River, and running a direct line to the mouth of a creek which empties into the Ohio not far above Fort Massacre; then down the Ohio to the Mississippi; then up that river and the Illinois to the place of beginning.” In 1795, Governor St. Clair divided his namesake. All the territory south of a line running through the New Design settlement was formed into Randolph County. It was named in honor of Edmund Randolph of Virginia. Since this left Kaskaskia in Randolph County, Cahokia became the new county seat for the County of St. Clair. Further divisions took place in 1812 when Madison, Gallatin, and Johnson Counties were established and in 1816 when the creation of Monroe reduced St. Clair County to its present dimensions. The county seat was moved to Belleville in 1814. St. Clair’s fortunes, like his county’s size, were also on the ebb. He commanded a force numbering 1,400 in a 1791 expedition against the Miami Indians. The Indians, with St. Clair losing a half of his forces, cut his army to pieces. (See Richard Battin’s article on this battle in the Summer 1996 edition of The Early American Review) This defeat was the worse suffered at the hands of Native Americans having three times the casualties as Custer’s defeat at Little Big Horn. St. Clair resigned his military command in 1792 and the office of Territorial Governor in 1802. He retired to Pennsylvania and wrote and account of his failure against the Miamis. St. Clair died in August 1818. In that year Illinois became the 21st state in the Union, a state only slightly larger than the original St. Clair County.
Popular Cities
Richmond Tutoring Dallas Fort Worth Tutoring New York City Tutoring Phoenix Tutoring Boulder Tutoring Seattle Tutoring Denver Tutoring Houston Tutoring Milwaukee Tutoring Tulsa Tutoring
Popular Subjects
Algebra Tutors 9th Grade Homework Tutors Cherokee Tutors Malacology Tutors HSPT Tutors Intellectual Property Law Tutors Monster Hunter: World Tutors PCAT Chemistry Tutors Computer Animation Tutors GMAT Tutors 8th Grade Writing Tutors Subtraction Tutors AP Computer Science A Tutors Teleology Tutors Real Estate License Tutors SAT Tutors 11th Grade French Tutors AP Calculus AB Tutors Computer Science Tutors A Level Design and Technology Tutors
Popular Test Prep
SAT Subject Test in Japanese with Listening Test Prep Series 79 Test Prep PSAT Test Prep USMLE Test Prep CLEP Humanities Courses & Classes MCAT Courses & Classes NBDE Test Prep CGEIT - Certified in the Governance of Enterprise IT Courses & Classes MAP Courses & Classes PANCE - Physician Assistant National Certifying Examination Test Prep