William Allen and the Search for Economic Security

Not gain'd by Blood, nor took by conq'ring bands Healthy and Prosprous PHILADELPHIA stands, Design'd for Empire, Fittest for Command, Built in the Center of a fruitful Land Thou great Asylum, safe From lawless Foes; Where Liberty infull Perfection glows: As long as Winds may blow or Oceans rowl, Safe may'st thou Stand, and Trace from Pole to Pole. And there O ALLEN may's thou treasure find, Ev'n Great and Boundless like thy Gen'rous mind. [1] Jacob Taylor

"You may depend upon it that [Pennsylvania] is one of the best poor Man's Countrys in the World, and agrees very well with English Constitutions." [2] William Allen, in a letter to John Griffths.

When the nineteenth century historian John Watson began researching the early history of Philadelphia, an elderly Philadelphian named Timothy Matlock told him that the earliest carriage he could remember was William Allen's, an imported English coach pulled by majestic black horses. [3] It is not surprising that Allen's coach made an impact on this passer-by, Allen's team of horses and carriage "had long attracted attention, carry[ing] its owner in [a] state unequaled down Germantown Road." [4] Matlock's reminiscence brings to light the enormous wealth accumulated by William Allen, symbolized by his coach and land possessions. Coaches were a sight worthy of remembrance in early eighteenth century Philadelphia, in a population of well more than twenty thousand residents by 1772, the city had only eighty-four carriage owners. Allen's coach, however, stood above all others, valued at £200, twice as much as the average carriage, and driven by an imported English horseman. [5] In addition to its own display of wealth, Allen's coach continually traveled between his estate outside of Germantown, a place where "families able to leave the crowded brick town" could settle, to the hub of commercial Philadelphia where "the richest and genteelest merchants dwelt," Water Street. [6] In a society where land and transport were the most important status symbols of the day, Allen owned properties in the best neighborhoods in and out of the city and communed between the two in one of the finest carriages in the colony. The colony of Pennsylvania was very good indeed to the Allen family. A first generation Pennsylvanian, William Allen became the richest man in the city of Philadelphia as well as the colony of Pennsylvania. [7] History, however, has not been as kind to him. Known to contemporary Philadelphians as "the great giant," Allen's substantial shadow on the historical landscape has long diminished and been overshadowed by other colonial luminaries. [8] 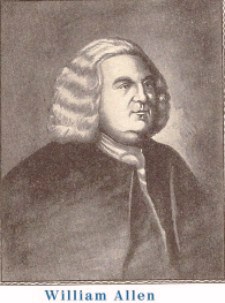