by George A. Bray III

In preparation for the intended expedition against the fortified town of Louisbourg on Cape Breton Island in 1758, Major General Jeffery Amherst ordered to be organized and trained "a Body of light troops . . . to oppose the Indians, Canadians, and other painted Savages of the Island", who would "entertain them in their own way, & preserve the Women and Children of the Army from their unnatural Barbarity". He further stated that "when the light troops have by practise & experience, acquired as much Caution & Circumspection as they have Spirit & Activity, These howling Barbarians will flee before them." In a letter to the Duke of Richmond dated Ile Royale, 28 July, Brigadier General James Wolfe writes "we have establish'd a Corps of light Foot, that might be infinitely usefull, tho' at present they are not so, from particular causes. They are Cloath'd and Arm'd a la Legere - commanded by Officers adapted to that service. . ." The commander of the light troops was Major George Scott, an officer of Major General Peregrine Thomas Hopson's 40th Regiment of Foot, who was familiar with irregular tactics. Orders issued on 12 May 1758, stated that "the rangers, and light infantry, appointed to act as rangers, are to be commanded by Major Scott." He was to serve with distinction both during the Louisbourg campaign and later with Major General James Wolfe at Quebec in 1759. Major Scott was to "teach his Corps to attack and defend themselves Judiciously, always endeavoring to get upon the Enemy's flank and equally watchfully to prevent their surrounding them". Further, they were to "be instructed to choose good posts and to lay themselves in ambuscade to advantage, to be alert, silent, vigilant and obedient, ready at all times to turn out without the least noise or least confusion." They were to "always march in files and generally fight in a single rank pushing at the Enemy when they see them in confusion and that the ground favors their efforts never [to] persue with too much eagerness nor to give way excepting a very great unequality of numbers." They also were to "avoid huddling together, & running into a Lump." This body of Light Infantry was formed from all the British corps involved in the expedition. Those who had been in America for some time were to furnish men "most accustomed to the woods" and "good marksmen." Those recently arrived from Europe were to provide those that were "active marchers" and "expert at firing ball." In general, all were to "be alert, spirited soldiers, able to endure fatigue." Some corps were to provide a lieutenant and twenty men, while others supplied a lieutenant and thirty men, except Fraser's 78th Highland Regiment, which furnished 100 men. According to an anonymous spectator of the siege, "these Light Infantry were a Corps of 550 Volunteers chosen as Marksmen out of the most active resolute Men from all the Battalions of Regulars, dressed some in blue, some in green Jackets and Drawers, for the easier brushing through the Woods; with Ruffs of black Bear's Skin round their Necks, the beard of their upper Lips, some grown into Whiskers, others not so, but all well smutted on that part, with little round Hats like several of our Seamen." The French termed Scott's men as "the English savages". The Rangers were described as having "a more cut-throat, savage appearance", while the Light Infantry appeared more as "artificial savages." This is further confirmed in a letter by an anonymous writer who writes "I have mentioned the light infantry: They are a body of men draughted out of the regiments, and cloathed something like the Indians, to scour the woods." 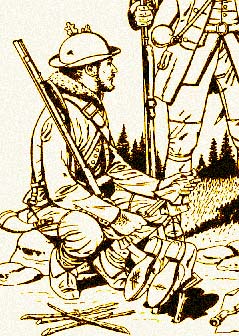 A member of Major Scott's Provisional Battalion maintains his equipment. 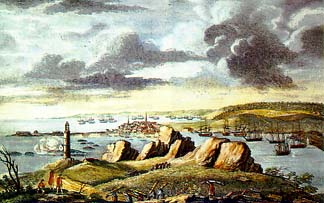