By Robert A. McGeachy

Archibald Campbell was a professional soldier from Argyllshire, who was to become one of the British Empire's most distinguished generals of the late eighteenth century. George III promoted Campbell to the rank of General, and also knighted him, in recognition of his military service to the Crown. For a man who was to receive these honours, and is buried at Poet's Corner in Westminster Abbey it is perhaps surprising, therefore, that his military record, and his achievements in the civil administration of the Crown territories he governed, have been largely forgotten. Campbell of Inverneill was to serve with distinction in the Seven Years War (1756 ñ 63) against France and her allies, and subsequently in India. It was in North America, however, during Britain's war against her former colonies (1775 – 83) that Archibald Campbell was to earn his reputation as one of the finest British military commanders of the period. Indeed, Campbell of Inverneill won the distinction of being one of the few British generals whose reputation was actually enhanced by a conflict, which destroyed or seriously undermined the reputations of so many other British commanders, such as Gage, Howe, Clinton and Burgoyne.1 Archibald Campbell's military achievements in the southern colonies, where his tactics and victories restored Georgia to the Crown, and his inspired governorship and defence of Jamaica which saw him play a key role in thwarting French attempts to capture the island, and in providing invaluable support to the British war effort in North America, were all the more remarkable for the fact that he had spent almost two years of the war as a prisoner of the American Patriots, in what proved to be the most harrowing circumstances. 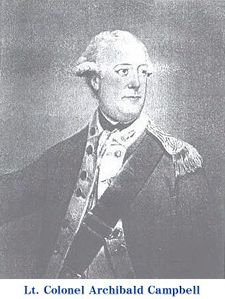 Nothing demonstrates more clearly Archibald Campbell's commitment to settling down in Scotland than the use of the fortune he had amassed in India to set himself up as a Highland Laird (large landowner) in his native Argyllshire. Archibald Campbell's six years of service in India had been lucrative and his younger brother, Duncan, confirmed that at the end of his brother's first posting to India, he had "acquired additional marks of distinction from his Sovereign, and an independent fortune, with an unblemished reputation".15 It was certainly a good time for Archibald Campbell to set himself up as a Laird, because economic conditions made it a buyer's market for land in Highland areas such as mid-Argyll. The burden of inherited debts, poor investments, and low estate income had put tremendous pressure on many of the local Lairds, who were to lose their estates as a result. Lairds such as Sir James Campbell of Auchenbreck, for example, had his estate sequestrated in 1762, while Archibald Campbell of Danna was forced to sell his estate in 1773 to pay the family's debts. The estates of Campbell of Ashfield, and of the MacNeills of Arichonan, were also in serious trouble by 1775, and with others such as the estate of Archibald Campbell's cousin, Captain Neil Campbell of Duntroon and Oib, it was only a matter of time, with the latter going bankrupt in 1785.16 Campbell of Duntroon, in a vain attempt to save the family's estate or "the Old Bark" as he described it17, subsequently took up a post with the Madras Presidency at the express invitation of Archibald Campbell, who was appointed governor of Madras in 1785. Duntroon was one of the lucky few able to secure such an appointment, because Archibald Campbell was inundated with applications from indigent kinsmen who wished to accompany him to India. This was referred to light-heartedly in a letter to Campbell of Inverneill from his friend Henry Dundas, who was a government minister and influential member of the Board of Control which had been set up in 1784 to oversee the management of the East India Company: "...the County of Argyll will be depopulated by the emigration of Campbells to be provided for by you". The Directors of the East India Company refused to allow Archibald Campbell more staff than was absolutely necessary, and many applications were to prove unsuccessful.18 It would appear, however, that Archibald Campbell succeeded in appointing enough of his kinsmen to senior posts, including the appointment of his nephew James Campbell (son of his elder brother, Sir James Campbell) as aide-de-camp, to merit his administration passing into the history of the East India Company as the "Scottish Invasion". Large fortunes could be made in India and it is not surprising, therefore, that the opportunity to serve in the East India Company's army or in its administration was so attractive to poverty stricken members of the Highland gentry. The change in Archibald Campbell's own circumstances indicates the scale of the rewards which could be involved. Archibald Campbell used his new found wealth to take advantage of changing economic conditions, and the attendant changing patterns of land ownership, to become a major landowner in Argyll. Reflecting this, in 1773 - 74 he became the proprietor of the estates of Inverneill and of Danna, and consolidated his position as one of only two proprietors who held all of the land in North Knapdale (the other being Neill Malcolm, 11th of Poltalloch), with the subsequent purchases of the estates of Knap (1776), Taynish (July 1780) and Ulva (1784).19 Having apparently returned to Britain to settle down, Archibald Campbell was on the point of immersing himself in the life as the Laird of a large Highland estate and as an MP, when the deteriorating political situation in Britain's North American colonies demanded his immediate return to the Army. The American Patriots' local protests in Boston and New York, principally against the British Government's taxation policies, quickly erupted into a full-blown revolution. This, in turn, ignited a global conflict when France, Spain and Holland decided to back the Patriots. This war was to have a major impact on the Highlands, which proved itself to be a vital recruiting ground for the British Army and Navy. The war also impacted on the Highlands in other ways, as many of the Highland settlers in North America were drawn into the conflict on both sides. Some attempted to return to Britain, or went to Canada, to avoid the fighting. Contemporary estate correspondence from Argyll confirms, however, that this was not without its own risks. The Campbell of Barcaldine Estate Papers, for example, contains a letter dated 27 June 1784 from Mary Campbell to her uncle, Alexander Campbell of Barcaldine, Advocate, which highlights the losses suffered by her family as just one of the many thousands of Loyalist families driven into exile both during, and after, the conflict. Mary Campbell wrote to her lawyer uncle for advice about obtaining compensation from the British Government for the losses her family sustained in the course of the American Revolution. She enclosed a copy of the petition submitted by her family to the commissioners appointed to enquire into the losses and services of the Loyalists. In support of this petition Mary Campbell cited the facts that her husband had fought on the British side at Bunker's Hill, and that she and her children had been captured on his sloop on their way from Boston to Halifax.20

Archibald Campbell returned to the Army in 1775 as Lt. Col. of the second battalion of the 71st (Frasers) Highlanders, which was raised by General Simon Fraser, the Master of Lovat. Fraser's father, Lord Lovat, had died on the scaffold for his part in the Jacobite Rebellion of 1745 - 46, and his estate had been forfeited to the Crown. The young Master of Lovat fought relentlessly to get his family's estate restored and when he finally succeeded, raised Highland troops (mainly from amongst his own clan) to fight for the Crown out of gratitude to the King. The original Frasers' Highlanders (the 78th Regiment) played a heroic part in the bloody attempt to capture Fort Ticonderoga from the French during the Seven Years War, and served with distinction for the duration of that conflict. When war broke out in North America against the Patriots in 1775, General Fraser once again raised Highland troops "warmly assisted by his officers, of whom no less than six, beside himself, were chiefs of clans". Two battalions of a combined strength of 2,340 men were raised, and assembled "first at Stirling, and afterwards at Glasgow, in April 1776".21 When the two battalions reached Glasgow they joined the 42nd Highlanders (the Black Watch), and a combined force of nearly 6,000 Highlanders was stationed in the city. Contemporary accounts confirm that their appearance and model discipline made a distinctly favourable impression upon their officers, and the local civilian population.22 Before the impact of Clearance depopulated the Highlands, thousands of Highlanders joined, or were impressed into, the British Army and Navy. During the American Revolution, many Highlanders were tempted by the possibility of securing land in North America at the end of the hostilities. Serving with the 71st Highlanders was, therefore, an attractive option, and the muster for Frasers Highlanders was significantly over-subscribed, to the extent that some of the men became stowaways rather than face being left behind. The Regiment served with distinction in many of the war's major engagements, such as the battles of Brooklyn Heights, Guildford Court House, Brandeywine Creek, and at Yorktown when Lord Cornwallis surrendered. It was during this war that the Regiment began to wear a red hackle in their hats, after General George Washington had written to an old acquaintance on the British side, Lieutenant Colonel Maitland, complimenting the latter on the conduct of the 71st Highlanders. In his reply, Lieutenant Colonel Maitland jocularly advised General Washington that the regiment would now wear a red hackle in their bonnets to ensure that the General did not overlook "doing justice to their exploits, in annoying his posts, and obstructing his convoys and detachments", as the General "was too liberal not to acknowledge merit, even in an enemy".23

Arrival in America and Capture

» Continued on next page